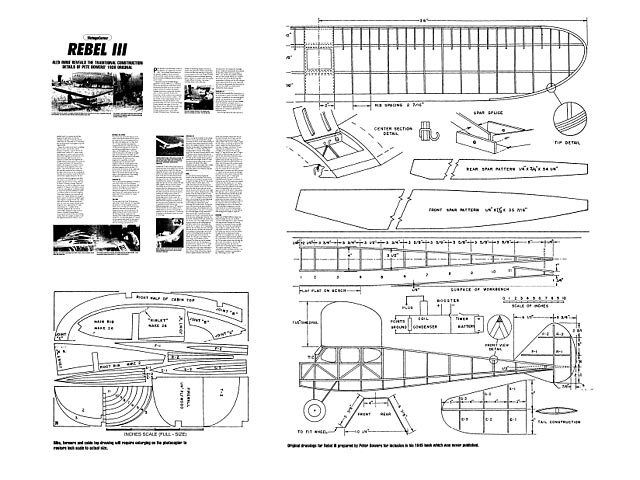 The Rebel II was designed in 1938. This here is a much later reprint from an Aeromodeller 'Vintage Corner' article in Dec 2000, that reprinted the original drawings.

Peter Bowers is (as Bill Winter wrote of Paul Plecan) 'an original, he was there then!' I have already leaned heavily on this pioneer modeller's work in previous articles and this month will look at what he had to say about building his famous Rebel III power model.

A general survey of the Rebel designs appeared in the July 1996 issue. It included a three-view drawing from Frank Zaic's Junior Aeronautics Yearbook and in the narrative I made so bold as to mention the unusual fuselage construction, stating that members were '...raised at the front to allow the forward part of the crutch to curve upwards to impart the correct bottom outline...' - this was merely a loose interpretation from the drawing and as we shall see below it was, strictly speaking, incorrect!

In June last Vintage Corner, mention was made of work that Peter Bowers did in 1945 while serving in the US Army Air Force based in India when writing a proposed book on the hobby occupied his leisure hours. The book was ... [text unreadable] ...number of interesting chapters of value to present day enthusiasts. Readers should bear in mind that Pete was catering for beginners, so if you aspire to be a true vintage modeller, his building instructions, although appearing/labour intensive to modern eyes, need not be thought difficult or boring - the writer considers them to be a first class introduction to the making of a free flight power model, and recommends the practices he describes. Follow them and produce a Rebel - you will then be justified in feeling that you have actually MADE your model in the manner used some 60 years ago.The construction is all-balsa, and the only adhesive used is balsa cement. If you are a 'cyano kid' and intend to take present day 'short-cuts' to ease your lot, maybe you should not be reading this column anyway!

FUSELAGE (1) Study the plans carefully. The construction is a bit unorthodox in places, and while it is simple enough, it is possible to ruin the whole job by setting it up improperly. Lay out a full-size drawing of the plan view of the basic fuselage frame on the bench, and build it from 1/4 in square hard balsa; be sure that the longerons project 1/4 in beyond the first cross piece, as these stubs are needed to hold the front bulkhead in place..."

Planfile includes article.
Alternative drawing, not full size. This is a (reprinted) page from the Frank Zaic yearbook 1938, showing the Rebel III design. 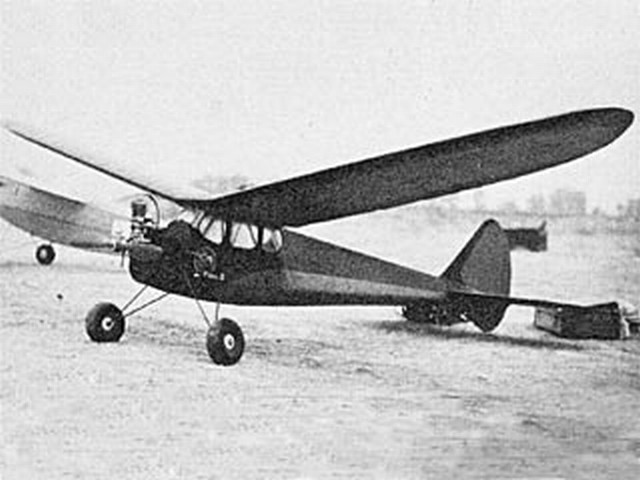