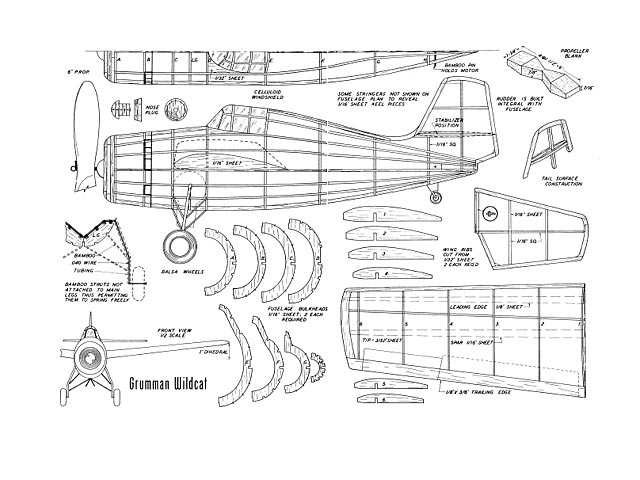 STANDARD fighter of the US Navy and mMarines is the Grumman Wildcat F4F-3. A single-seat pursuit of midwing design, it is sturdily built and possesses a high degree of maneuverability. It is primarily designed as a shipboard fighter.

Like most military planes, performance figures have been restricted. However, these details of the Grumman G-36, a similar ship used by the RAF fleet air arm, have been released: A twin Wasp engine of 1,200 hp affords a top speed of 330 mph. Cruising speed is 300 mph, and the landing speed is less than 70. Climb is more than 3,000 feet per minute, while the cruising range is 1,150 miles.

Every flying scale fan will want a model of this outstanding plane for his fleet. Simply built to conserve materials and attain lightness for best flying ability, the little ship has proved to be a stable, consistent performer. In spite of the bulky, heavy appearance of the real ship's design, the model has a snappy, tight-spiraling climb and easy glide. Needless to say, the model's ability to withstand abuse is inherent.

The pages of plans are drawn full size, and they are intended to be joined together. It is best to make tracings of the important parts and thus the magazine will be kept intact. All balsa wood should be selected carefully to assure a sturdy, light structure; make all frames accurately and, finally, cement each joint firmly.

The keel and bulkhead method of construction is employed for the fuselage. Notice that the rudder is built right with the fuselage; it is in reality a part of the top keel. Cut the various parts of the four keels - top, bottom and two sides - from sheet as shown. Bulkheads also are sheet, and only the notches shown are cut out; others are marked to be cut later as needed. Assemble over the fuselage plans by pinning the top and bottom keels into place. Half of the bulkheads are cemented into position and a side keel attached. Now remove this structure from the plan and add the remaining bulkheads and side keel..." 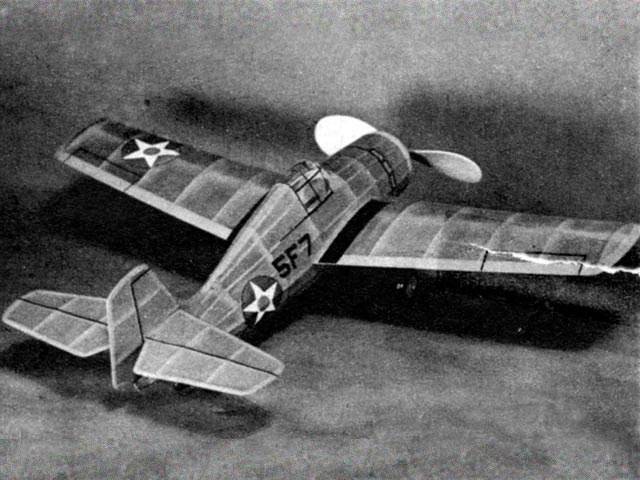