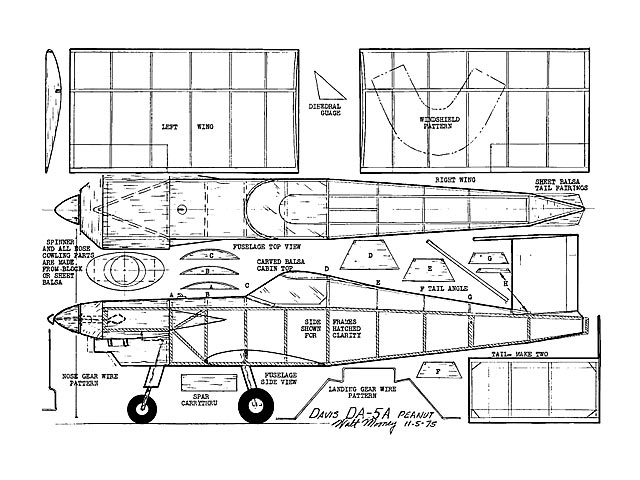 Quote: "Davis DA-5A, by Walt Mooney. Not quite the average Peanut, this time! It's low-winged, Vee-tailed and trike geared. With that long rubber motor, however, it's above average in the flying department.

As an old peanut enthusiast, I am always on the lookout for a new configuration. In the November 1975 issue of Air Progress, I came upon a three-view and an article on this one. The three-view had some differences from the real plane, but there were enough photos to enable a modeler to build a good replica of Mr. Davis' little jewel.

The model in the photos is a nice stable flyer, but it weighs 3/4 of an ounce and is therefore quite a bit heavier than some of the Cougars and Laceys that are around. This one has done 25 seconds indoors. By using lighter wood, thinner sheet and superfine tissue, it could be built to less than 1/2 ounce with a potential for much higher flight times.

At the last Flightmasters indoor scale meet, it got whipped by a couple of Cougars and a Lacey, but otherwise held its own. It is quite strong, and is an interesting new shape to model.

The wing and tail structure is perfectly common, so no further comment need be made about them. However, the fuselage has several interesting innovations that are worth talking about.

The designer of the real airplane is a very clever designer of simple, easy-to-make sheet metal airplanes. The DA-5A is a great example of this talent. With the exception of the spinner and, possibly the nose cowl, no piece of aircraft skin has a compound curve. All of them are either flat or simply wrapped curves. Nevertheless the DA-5A is very well stream lined.

Start the fuselage in the conventional manner by building two fuselage side frames over the plan. Note that the side frame is hatched and that the frames are built just a little longer than the side view of the airplane, to account for the sharp taper in the plan view of the aft end. Note also that, at the nose of the model, the frames are only the height of the engine cheek cowls.

Build up the main fuselage box by adding the cross pieces at each upright, using the top view to determine the correct body width. It will be necessary to crack the longerons at the back of the cabin and the bay near the leading edge of the tail to obtain the straight-line taper shown. Add the formers from A to H, and then the two top stringers aft of the cabin.

Cover the top of the fuselage, from A to a point half way between C and D, with thin sheet balsa. Cut out the half circle for the front of the cabin as shown in the top view. Carve a cabin top out of soft balsa block and cement it in place on the top of former D. Add the center stringer between D and E. Cover the top and bottom of the fuselage box structure between the nose block and A with 1/4 thick balsa block and add side cheek blocks of the same thickness on each side. When this is dry, carve the blocks lo the shape shown for the nose. Install a crosspiece between the uprights at the bottom of station C, where the wing spar meets the fuselage.

Now bend the landing gear wires and install the main gear. Install the nose gear after filling instation A below the cheeks with a sheet bulkhead. Add a sheet balsa brace between the wire and the bulkhead.

Now complete the bottom of the engine cowl. This consists of two side pieces and a bottom. The bottom is a triangle as indicated by the inner dotted lines in the top view. The sides are shaped according to the side view. Note that their true length is indicated by phantom lines which account for the foreshortening in the side view due to their angle.

Carve a nose-block to match the shape of the cowl front. Exhaust stacks are short lengths of dowel or aluminum tube. The propeller is modified from a plastic propeller. I used one of the Tern props obtainable from Vintage Aero. I carved a hard balsa spinner, cut the blades off of the prop and epoxied them in place on the spinner. You can also use the prop as is, and split and fit the spinner to the prop in two halves.

Use thin sheet balsa to fill in between the top longerons at the tail, and add the triangular tail fairings, angling them up to match the tail dihedral.

Cover the model with white tissue. After the tissue has been shrunk with a fog of water, assemble the component parts onto the fuselage. Then give all parts a coat of thin dope. Give the fuselage a second coat of dope.

Now carve the streamline cheek fairings and cement them in place on
the sides of the fuselage behind the cowl cheeks. Cut out the windshield from thin plastic and fit it in place. Use the pattern as a guide; the pattern shown was drawn directly off my windshield but you may find that it needs a slight adjustment.

The color scheme of the Davis is overall white with blue tips on the wings and tail and a blue stripe on the fuselage. Black pin stripes are used on both sides of the fuselage trim and inside of the surface trim. The registration number is black. The correct size for these is 1/2 inch tall. On my model they are only 3/8 (completely out of scale). My only excuse is that they were put on in a hurry and that was the only size decals I had.
Add the gas tank cover on the top of the fuselage just behind A. Use India ink, or black thinline felt pen to detail the control surface outlines. Use flat toothpicks to make the tail counterbalance booms.

The model shown tended to turn very sharply to the left and required about an 1/8 inch of right thrust adjustment under the side of the nose-block for successful flights." 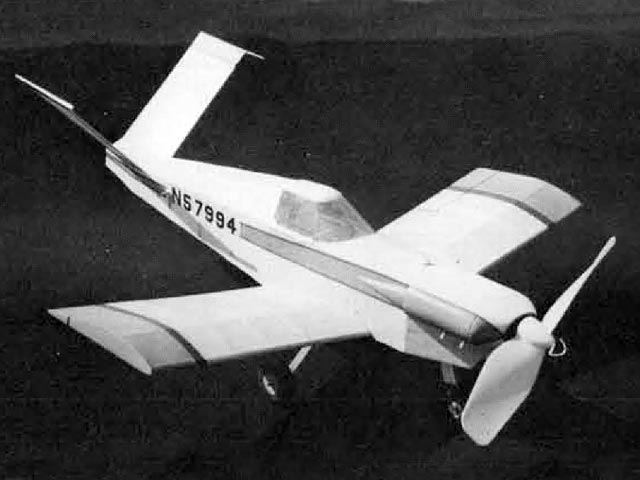