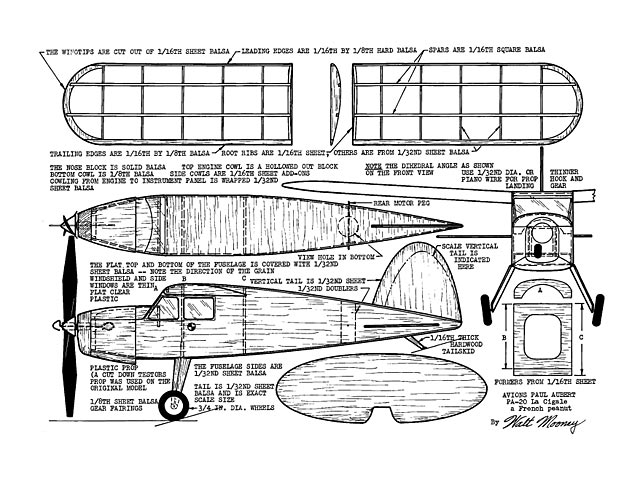 This is a simple little peanut scale model. The original airplane had a very square fuselage and a large horizontal tail. It seemed like a good design for a model that could be expected to fly with scale tail surfaces. It was built with a sheet balsa fuselage and sheet balsa tail surfaces to simplify construction. Only the wings are of built up stick-and-tissue. The only intentional deviation from exact scale was an increase in dihedral angle - the real plane had no observable dihedral.

Alas, the model did not fly right off the drawing board. In fact, as originally built, it would hardly fly indoors at all! This is pretty bad for the old Peanut Vendor's reputation. It simply would not turn to the left and spiraled in if it was turned to the right tight enough to miss the walls of the local basketball court. When I say it would not turn left, I mean it would not turn left with half of the original scale tail turned 30 degrees. Who ever heard of that stubborn a model?

So it was taken home and the problem mulled over a bit. The result: a larger vertical tail as shown on the plans. It is now quite happy turning left. I suspect that a decrease in dihedral angle might have also corrected its resistance to a left turn, but increasing the size of the vertical was lots easier than trying to get the wings off and put them back on with less dihedral, and besides, the spiral diving in right turns was a little worrisome. (Modelers could tack wings on at less dihedral and try a scale rudder before going to the larger rudder.)

Construction of the model is simple enough, so not much need be written about it. The nose end is added to the basic fuselage structure after the sides have been assembled on the formers, and the bottom skins attached. Right at the front of the sides, 1/16 by 1/8 balsa reinforcing sticks are cemented inside and crosspieces are added to make a square-ish frame just behind the nose block. Cement the side cowls to the sides and the bottom cowl block to the bottom skin. Rough carve the top cowl block and hollow it out, then cement it in place. Temporarily cement the nose block in place, then carve and sand the nose to final contours.

Don't forget the side doublers on the inside, where the aft motor peg penetrates the fuselage. The grain on these pieces must go up and down, that is, cross grain to the fuselage. Add a skin of cement to the inside of them as a further reinforcement to help take motor loads. Note also the round hole that should be left open on the bottom in the area of the aft peg. It is dark inside of sheet balsa fuselages, and the hole makes installing rubber motors much easier.

The landing gear wire is inserted through a slit in the bottom skin just forward of Former "B" and cemented in place. Use a sliver of balsa to fill the slit.

Red tissue was used to cover the wings, to color the top of the fuselage, and the top and bottom of the horizontal tail. It was also used to make the license letters. French registration letters always start with F, and I didn't know what the real registrations should be. However, modeling is lots of FUN, so.

The wheels are 3/4 inch diameter hardwood, made by Marlow Engineering, 6850 Vineland, North Hollywood, Ca. 91605, which also makes kits and other interesting accessories. The catalog is 20¢.

The thrust bearing is a nylon one, designed by Peck Polymers, for small rubber models; they can be obtained from Peck or from Bill Hannan Graphics, Box A, Escondido, Calif 92025. Catalog 25¢.

The prop used on the model is a cut down Testor’s prop from one of their ready-to-fly models. I don't know any other way to get one of these specific propellers, but I wish Testor’s would put them on the market all by themselves. However, both Hannan and Peck can supply suitable plastic props and Marlow makes balsa ones that are easy to finish into lightweight propellers.

Wire, sheet balsa and tissue are obtainable at your local model shop. Tell 'em the Peanut Vendor sent you." 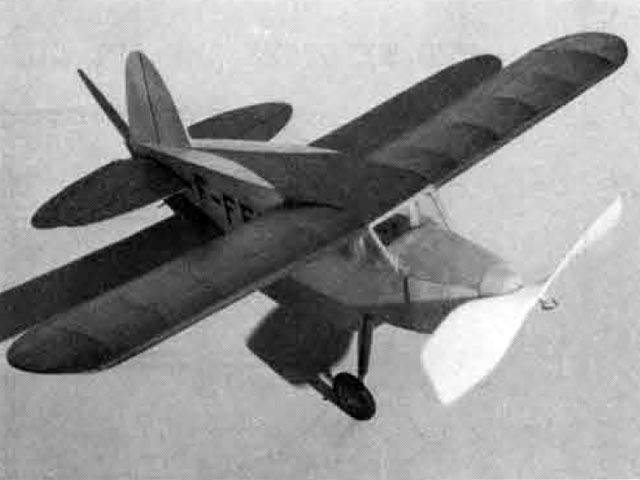