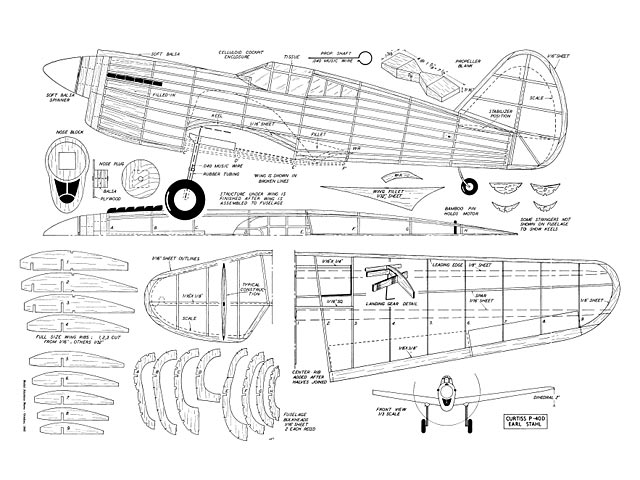 For this month, as a flying scale feature we offer you a model of the famous Curtiss 'Hawk' P-40D, the fighter that is carrying the war to the Axis on the far-flung battle fronts of the world.

The new Curtiss Hawk P-40D and its counterpart the British Kittyhawk are advanced versions of the wellknown P-40 of the Army Air Forces and the 'Tomahawk' of the Royal Air Force. Speedier, with improved all-around performance, greatly increased firing power and more protective armor, they are being produced in vast, ever increasing numbers.

Performance figures are restricted, but it is known that the maximum speed of the Allison powered version compares with the Spitfire's 367 mph. A similar but newer model, the P-40F, with an American made Rolls Royce Merlin engine is even faster. Reports from the Middle East inform us that Germany's latest 380 mph Messerschmitt Me 109F's are speedier but the more maneuverable heavily armed RAF Kittyhawks are considered superior. Five to one in favor of the home team is the African average to date! In the Pacific theater these potent fighters piloted by gallant American airmen have repeatedly demonstrated their superiority against fighters and bombers of the Setting Sun.

Every flying scale builder will want for his fleet a replica of this famous fighter which has the same fine characteristics as the real ship. Its appearance is unequalled; the construction easy and in performance compares favorably with any similar ship - a picture on display or in flight. Standard construction methods are used throughout, nevertheless, it is advisable to study the plans and instructions thoroughly, before building.

CONSTRUCTION: Use of keels, cut from sheet balsa, simplifies assembly of the fuselage and aids in making the structure more accurate. Trace the top, bottom and two side keels on 1/16 sheet balsa and then with a sharp razor blade cut them out. The section between D and E has no support at the top (cockpit opening) but a curved piece conforming to the wing upper surface is placed at the bottom as indicated. Bulkheads also are cut from 1/16 sheet and two of each are required. Notice that not all bulkheads have notches for stringers cut out the notches shown and mark the positions of others, which are cut later as needed.

Pin the keel pieces over the fuselage plan to begin actual assembly. Cement half of the bulkheads to their respective positions, aligning them so, they are exactly perpendicular to the keels. Attach a side keel and, when the cement has hardened, remove this frame from the plan and add the remaining bulkheads and keel. Stringers are medium grade 1/16 sq strips. Using a razor blade that has been broken to, a sharp point cut the necessary notches for stringers as the work progresses. Once a stringer has been attached to one side, always place one in the corresponding position of the other side to avoid pulling the body out of line. Pieces of hard 1/16 sheet cemented between the stringers provide the anchorage for the bamboo pin that holds the rubber in the rear.

As indicated on the plan, the front portion of the fuselage is filled-in with pieces of very soft 1/16 sheet. lndividual pieces of balsa are cut so as to fit snugly within the space between the bulkheads and stringers. The extreme front of the nose is shaped from four pieces of 1/4 laminated sheet balsa. Broken lines indicate how the nose is hollowed to receive the nose plug and for lightness. Cement the nose block to the front bulkhead and, when dry, cut and sand the entire fuselage front to a smooth, accurate shape. Where the wing fits in, curved 1/16 thick pieces are cut to fit exactly to the airfoil shape. It is necessary for the wing to be of strong construction since the landing gear is attached to it. It will be necessary to make a drawing of the left wing so both halves can be assembled directly over full-size plans. Ribs, 1, 2, and 3 are cut from 1/16 sheet while the others are 1/32 sheet. Sand them to, exact and size and cut the notches for spars. Spars and leading edge are cut from sheet stock as indicated and the trailing edge is it tapered 1/8 x 3/8 strip. Tips cut from 1/8 sheet are assembled over the plans. Use pins to hold the various pieces in place until the cement has set. Join the wing halves with 2 dihedral at each tip; then add the single center rib and the several short 1/16 sq. spars. Next attach the 1/4 deep landing gear spar and reinforce the joint necessitated by the dihedral angle. Finish the wing by cutting and sanding edges and tips to conform to airfoil shape.

The landing gear struts are fashioned from .040 music wire. The wire is bent in such a manner as to join the spars and rib 3 as detailed on the drawings. Be sure to, make a right and left strut. With thread bind the struts to the spars and then use a needle and sew right through rib 3 and about the wire. Apply several coats of cement to the thread wrappings and adjacent areas..." 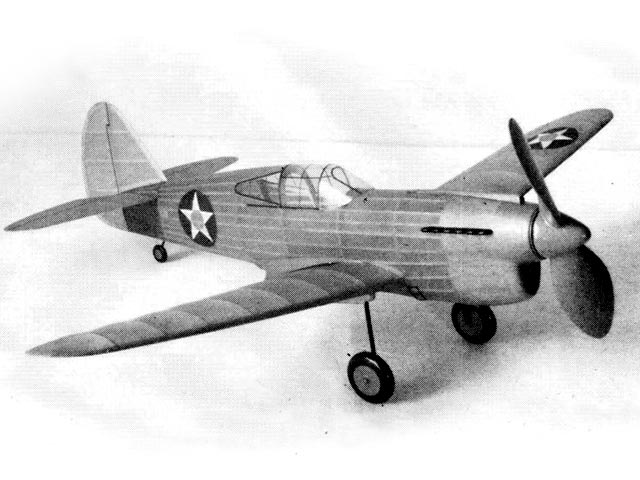