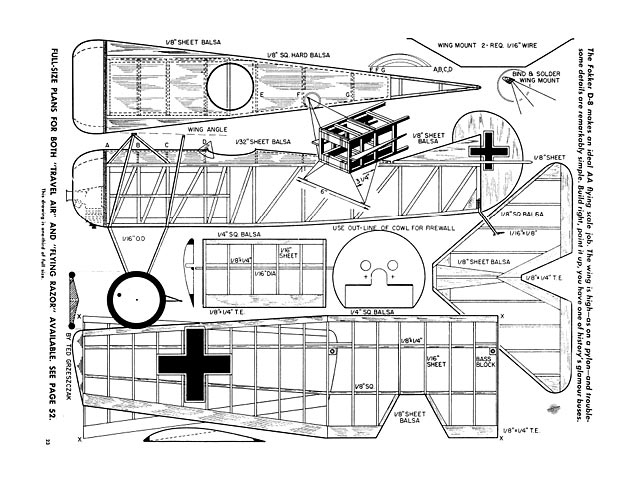 The Fokker D-8 with its high wing location, large stabilizer and few wing struts make this ship a wide choice for modelers who want a realistic scale model and yet not take a master to build or fly it. This all-red model with white band and jet black German crosses and checkers make this job a stand-out in the line up.

The wing has only 1-1/4 in of dihedral under each tip. This proved ample as the ship is not fast and trimming is easy. The wing struts are soldered together at the wing junction and a loop is bound and soldered in place. A bolt is slipped through here and screwed to the bass blocks cemented in the wing and backed up with a nut soldered to a brass plate which is cemented in place.

Though a scale model, weight is only seven ounces. It comes from the selection of hard balsa, hardwood wheels turned from maple, and a good color-dope job. The cowl is carved from soft balsa. Timis is hollowed out to accept the engine and tank. If a flight timer is wanted, this can also be installed ahead of the firewall, keeping all the fuel out of the fuselage.

Fuselage is started with two side frames which are laid out on the plan with the aid of pins to keep the longerons in place. Do not pierce the longerons! Place the pins beside the 1/8 strips. Both sides can be built one atop of the other. This will assure you of two identical sides. When dry, remove from the bench and add the crosspieces; these are cemented in place from the front-to the rear, check-ing to see that the fuselage is square. Add 1/8 x 3/8 fuselage stiffeners in the nose to bind the gear to. The wing mount can be bent and bound in place. Cut the bulkheads from 1/16 sheet balsa and cement them in place. Cut the sheet keels out and cement in place on the nose behind the firewall.

The firewall is cut from 1/8 plywood to which the nuts for the engine-mount bolts are fastened. Solder them to brass and cement it to the back of the firewall. The turtle-back can now be covered with 1/32 sheet balsa. The cowl is roughed out and cemented lightly to the firewall. Shape it as shown and, when completed, remove and hollow to wall thickness shown on the plan. Cut the rear post and bend the tail skid to shape and bind in place. Sand the entire fuselage and re-cement all joints well.

Wing ribs are cut out as shown on the plan. Make a rib template of a piece of thin plywood or metal. Mark off the length of the rib on sheet balsa using the template to carve the top curve; then holding the leading edge in place, raise the trailing edge until the bottom coincides with the top curve..."

Note scaling is unclear. Some of the dimensions as printed are simply not possible (the 1/4 sq LE is shown as being half the width of the 1/4 wide TE).

The plan is labelled as being printed at 1/3 of full size, which would make the wingspan around 39 in, which is clearly not correct for the model shown in in the photos (see pic 004).

Working from the TE being 1/4 in, the LE being (probably) 1/2 in, we are going to declare this plan as having a wingspan of 28 in. Which would match with the main wheels being 2-1/2 in dia exactly.

Article, thanks to Ray Klein on HPA. 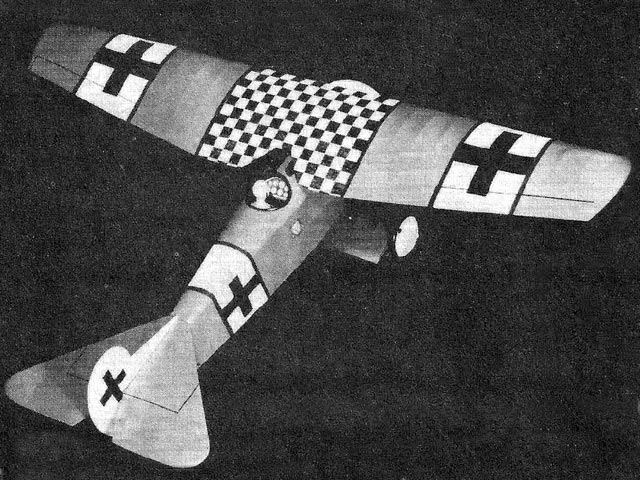