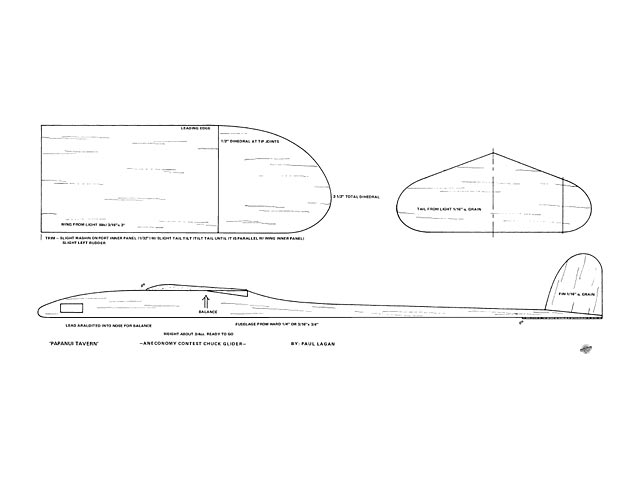 Quote: "The Papanui Tavern goes back a few years now to the days when keen Christchurch FF'ers gathered in the local (the Papanui Tavern, of course) to tear the FF world apart over an ale or two. Since then, the bull sessions have faded away, but the Glider lingers on. I have always had a Tavern or two ready to fly at local or National level contest. It really is complementary to a thermal HL glider like the Zingara, which can be large, stable, equipped with all the necessary DT gear, and which normally does not have a great still-air performance. The Papanui Tavern is used at times when a Zingara-type glider is of no use - times when there is little thermal activity, or when it is raining or where it is necessary to get extreme altitudes to fly above local low-level turbulence. As a consequence, the PT is not fitted with a DT, it is easy and quick to build, it is cheap in that 2 models can be made from one good piece of wing wood, and it can be thrown by virtually anyone from raw novice to Olympic javelin champion. It is small and will go out of sight quickly, but as it is so easy to replace, it generally isn't worth chasing when in lift!

Like any good chuck glider, it is necessary to select the wing wood wisely to have any chance of success. Try and buy a sheet of near quarter grain 3/16 that is about 6 lb/cu ft density. If you can weigh the wood, then a sheet around 1-1/4 oz (36 grams) will be great. Use very light quarter grain 1/16 for the tail surfaces and sand them to taper to about .020 in at the tips.

Pick a sheet of very hard 3/16 or a strip of 3/16 x 3/4 balsa for the fuselage. Make sure that the wing and tail mounts are each set at zero degrees, then taper and carve the fuselage to shape so that it is about 3/32 to 1/8 wide at the LE of the tail. Glue the tail to the fuselage so there is a small amount of tail tilt (left side up when viewed from the back), then glue the fin on top of fuse.

At this stage, I generally dope the completed fuselage and tail assembly and the wing blank which has yet been cut to dihedral. It is easiest to control wing warps by doping at this early stage, as the wing can be pinned down if you doubt its ability to withstand the pull of the dope. Give the wing about 5 coats and the tail two. The fuselage should get enough to make it waterproof.

When dope is dry, tweak the trailing edge of the wing down about 1/32 at the left tip joint, add throw tabs and fillet glue around the wing/fuselage joint. Put a small piece of lead in the nose, so the model balances where shown and go fly!

To trim, I use 'weak' throws from the shoulder like a dart, with a bit of left bank. When the model climbs without looping or without behaving like an arrow (adjusted by bending the tail trailing edge), I add or subtract nose weight to get a good glide angle, then bend the rudder and the wing trailing edges at that left tip joint to get the glide turn.

Then is the time for the hard throws and fine trimming. I can usually get a PT trimmed in around 6 'shoulder' throws and 3 full power throws. If the model is clean (no blobs of nose weight sticking out and a reasonable surface finish) and if it is around the 3/4 oz (21 grams) weight, then it will go as high as your arm strength allows - typically about 100 feet. From there in good trim, it will glide for around 45 seconds without help. A really good arm and fine trim will get you into the 60 second region, but for the average man, 40 to 50 seconds is more realistic.

I can build 4 PT's from 2 sheets of wing wood, 1 of fuselage wood and 1 of tail wood. The 4 models can be completed in one 3 to 5 hour building session. Son John can build one in a 3 hour session. Build one (or 2, or more) this weekend!"