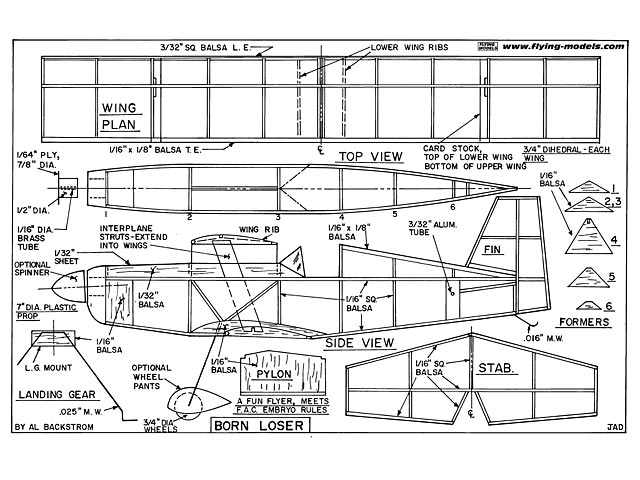 Quote: "When I was a kid, biplanes were the glamour aircraft of the era. This, of course, has led to a liking for them even when they generally don't fly as well. When I started building models after a long break working in various capacities in the full scale airplane world I stayed away from biplanes after a few gave poor results. In spite of their lackluster performance I thought that a biplane could have performance approaching the single wingers.

My degree in aeronautical engineering came after biplane design was eliminated from the curriculum, so I didn't know much about theories on them. To work out a decent design, I felt it best to look at what has worked well. In this case I chose to use the features of full scale biplanes that fly well. From this perspective it was decided that a reasonable aspect ratio should be used for each wing; this should be 6:1 or more. The larger the gap and stagger the more effective the wings would be. The gap should be approximately equal to or greater than the chord of the wings if equal chord is used, or if not, at least equal to the chord of the smaller wing.

With positive stagger the lower wing should be set at a slightly higher angle of incidence than the upper. This point gets a lot of argument but it comes from my experience in sailboat racing. Those of you who have participated in this sport will realize that the top wing is rigidly held in the safe leeward position and therefore has higher angle of attack induced by the location of the lower wing. I know that this is taking a macro situation and applying the result to a micro problem, but it works.

In designing most models I look to meet a set of contest rules to there is an excuse to fly the model after it is sorted out, rather than keeping it around just because it flies. In the case of the Born Loser it was designed to the Flying Aces Club (FAC) Embryo Endurance rules. The Embryo rules encourage models with a scale-like appearance and give bonus points for cabins or open cockpits plus wheel fairings and simulated exhausts. Also with Embryo rules the biplane models can have up to 70 square inches of wing area where a monoplane can only have 50. This model is not necessarily the best that can be done with a biplane using the Embryo rules but is just a good flying example of what biplanes can be.

For the Born Loser I wanted something that looked like a small homebuilt biplane that might have been done in the thirties. For this reason all the surface tips were built as square cuts and the fuselage is a simple box with a triangular upper fairing. I think this has come out as planned, except that I had to increase the dihedral and vertical tail area to get the stability needed for free flight. These changes are incorporated on the drawing of course.

The name Born Loser was chosen not because I expected the model to be bad but for the comic strip I enjoy for its innocent humor. The performance has not been in the loser category at all. My model won its first contest outing and others have reported victories or doing well with it.

Construction should pose no problems for anyone who has built stick and tissue models previously. All of the structure is 1/6 inch square stock or 1/16 sheet except the nose block, wing leading edge, and other small parts as noted on the drawing. The fuselage is built using the two sides built over the plans and each other. The upper fairing is a simple triangle. The forward sheeting helps brace the upper wing mount pylon. In mounting the pylon care should be taken to assure that it lines up with the fuselage center line.

The two wings are one piece each, and identical except for the spacing of the center ribs and tissue anchors at the interplane struts. The interplane struts extend into the wings so that they can allow adjustment of wing washin or washout as needed during trimming flights. They also serve to stabilize the upper wing mounting.

Builders option items such as wheel pants and spinner are not detailed as we all have our own preferences as how to do these items.

The model should be covered with tissue, Japanese tissue being preferred. Lightlky shrink the tissue using water..." 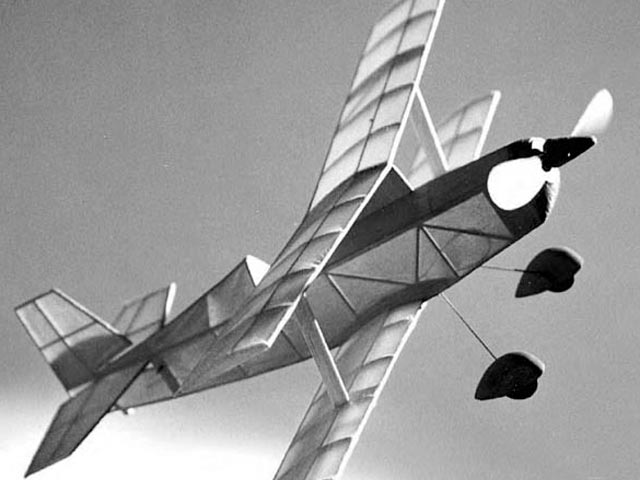