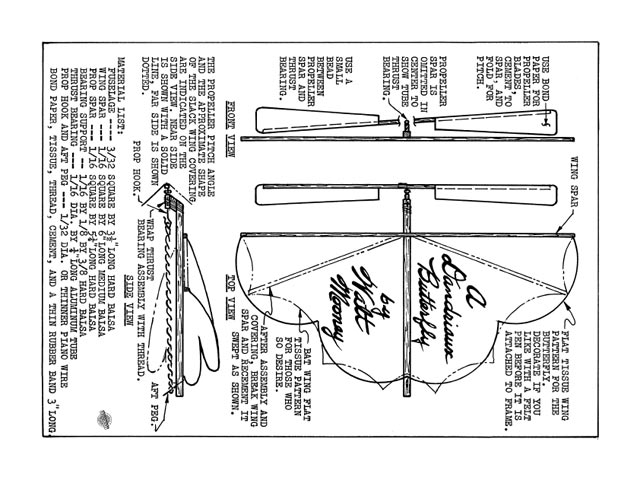 Quote: "Want to take a walk in famous footsteps? Build what was possibly the first 'model airplane' ever flown by the young Wright Brothers! The Dandriaux Butterfly, by Walt Mooney.

Almost everyone knows that the Wright Brothers were inspired to think about flying by a flying toy that their father brought back from Paris for their amusement. Not too many people know what kind of a toy it was. When this article was in its embrionic stages, it was intended to state that the Dandriaux Butterfly was the model that did the trick.

It now seems that in Orville Wright's letters, there is mention of a model by Alphonse Penaud. The Penaud Planophore (oz9501) model is more nearly what we would now expect, being something like an early Bleriot in configuration. However the letter was written late in Orville's life, during somewhat of a controversy.

However, in one of Wilbur Wright's letters written much earlier, he mentions little toy bats that he and his brother made and flew when they were young - toys that were designed after one was brought home from Paris by their father. He also mentions that when they were made larger, they did not fly so well.

Penaud's model could surely have influenced the Wrights, but it certainly flew like a model airplane (131 feet at 8 mph in 1870). This little toy flys like a bat. It's actually a coaxial counterrotation torque actuated rubber powered helicopter (whew!) capable of long flights vertically, and stable as long as it is under power. After the power runs down, it flutters to the ground like a dying moth (or bat, if you will). Indoors it will flutter around the ceiling like a moth around a light.

I believe it's safe to say the Dandriaux Butterfly was one of the toys that influenced the Wrights, probably the first. Why not have some historical fun building and flying one of your own?

All that is needed is some small sticks, a short piece of aluminum tubing (or a long bead), a small scrap of tissue, a little thin wire, and some cement.

Follow the plan and you can't miss. Just remember to break the spars and fold them towards the tail about an inch at the tips, after covering, so there is some slack in the tissue to form the aft rotor contour.

The center of gravity location is not very critical, but if your Butterfly is intent on suicide and dives head first, ballast his tail to move the CG aft a bit. And if you prefer bats, use black tissue and a bat-like tissue outline.

Fly your model, reflecting that models, such as this, were being flown 100 years ago." 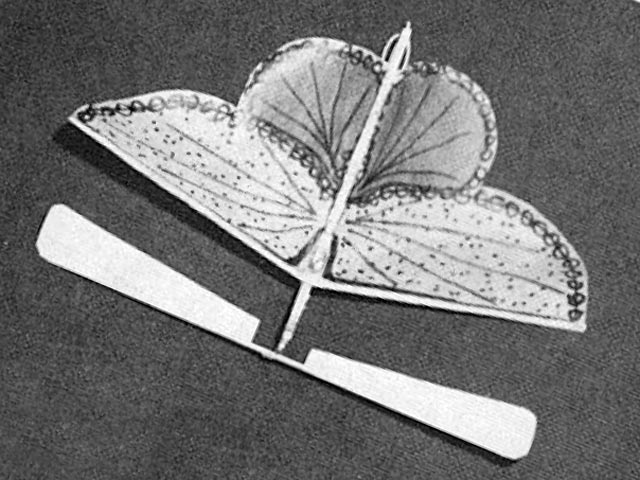