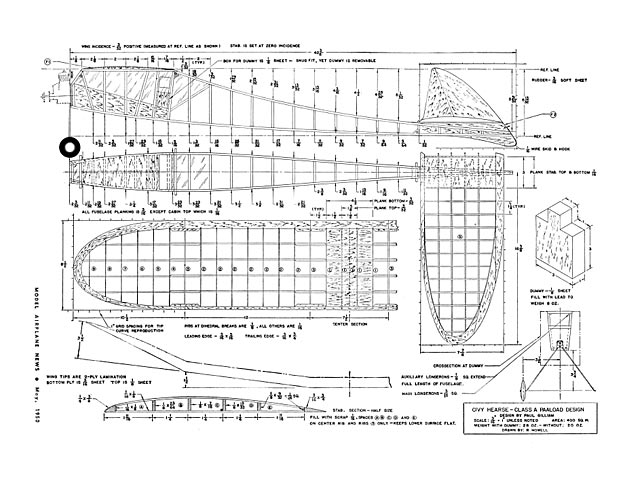 Note this PAA-Load model was designed to re-use the wing and stabilizer from the Civy Boy 51 (oz10174) design.

Note this is not a full size plan. This is a scan of the article and drawings as they appeared in the magazine pages, in 1950.

Quote: "This little ship can carry a real PAA-Load and still turn in fine performance. Civy Hearse, by Paul Gilliam.

THE Civy Hearse can fill a double bill for contest flying, as an AMA Class A Free Flight design, flown without the 8 oz dummy, and as the load-lift model for which it was originally designed. The first Civy Hearse was built for the PAA-Load event at the 1949 Nationals at Olathe, Kansas. The first official flight for the Hearse at the Olathe meet was only the second time the ship had been in the air. The model caught onto the tail-end of a nice riser and, working its way up into the thermal, turned in a good flight, placing me second to my good friend, Raymond Matthews, of Oklahoma City.

For use in the Pan American FAA-Load event, the Hearse weighs 28 oz, which allows an average wing loading of 7 oz per 100 sq in. This PAA-Load model was designed for use with the Class A Civy Boy 51 (oz10174) wing and stabilizer; the wing area is 400 sq in and the stab area 200 sq in. The model's common longitudinal balance is at the trailing edge of the wing; this arrangement, with the long stabilizer moment and the 50%-of-wing-area stabilizer, gives the design just about the most soaring glide to-date in our present state of free flight design. Actual tests and experiments with the rearward center of gravity, long stabilizer moments, and the large stabilizer area have indicated that any design using this combination can surpass the more conventional designs by 25% to 30% lift, thus increasing the glide or the dead air duration time in the same proportion, depending upon the adjustment proficiency of the flier.

While I was at the 1949 Nationals with the Civy Hearse, I overheard a comment by a young modeler. He had said to his friend: Gee! The fuselage on that model surely looks funny. True! The fuselage does look odd, as compared to conventional full scale airplane proportions, but it is the author's opinion that the shape of the fuselage has much to do with the fine performance of the model. The upswept front section of the fuselage was designed intentionally to give the wing and stabilizer vertical positions the same relationships that are applied to typical pylon designs, such as Denny Davis' San De Hogan (oz5350), and the Civy Boy.

The plans are drawn to a scale of 3/16=1 inch, with full size dimensions. Study plans carefully and prior to scaling plans to full size, fill in the grid lines indicated on plan, to accurately reproduce the same curves of the wing, stabilizer tips, and rudder. Balsa, ranging from medium to hard stock was used in the construction of the original Civy Hearse. The total fly-ing weight of the first model was exactly 20 oz, less the 8 oz dummy occupant. Builders of this design will find no difficulty in keeping the bare flying weight of the model to 20 oz.

The fuselage is of box-type construction using 3/16 sq hard balsa. Before you begin to construct fuselage sides, splice two long pieces of 3/16 sq from standard 3 ft balsa stock for use as the lower longerons. Lay out the two sides of the fuselage box, building one side directly on top of the other to obtain absolute uniformity. Cut and cement in place the up-right pieces of 3/16 squares. Cut two identical pieces of each pattern F-1 and F-2 from 3/16 sheet and cement into place on plan. When fuselage sides are dry, separate the two and cement the crosspieces in place using pins and small rubber bands to hold while drying.

The fuselage firewall is 1/4 in plywood and is heavily cemented in place, before the fuselage box is block-sanded. Add the 3/16 sheet planking to the fuselage in front and rear as indi-cated on plan. The fuselage section under the wing is planked with hard 1/16 sheet with grain running crosswise. Note: the position in the cabin for the dummy occupant. Use 1/8 sheet to plank a tightly-fitting compartment inside cabin for the occupant. Also note that the occupant is positioned with rear-most part near the trailing edge of the wing. THIS IS IMPORTANT! Do not relocate the occupant. Note: on the fuselage top view all of the cabin area under the wing is not planked; leave a hatch under the rear of the wing for inserting and removing the dummy.

The stabilizer platform is made from 1/8 sheet with grain running across the fuselage.

At this point we should consider what Class A engine will be used in order to drill the engine-mount machine screw holes in the firewall. Cement nuts thoroughly on the back side of the firewall to receive the engine mount machine screws. If an Ohisson & Rice .19 is used as on the original, the engine may be mounted radially to the firewall. When the McCoy .19 is used, a small metal engine mount or hardwood beam mounts will be needed. If builder uses hardwood beam mounts, pass them through slots in the firewall and cement in place 2 or 3 in back into the fuselage cabin. The Arden .199 may be mounted radially as the Arden design facilitates - by the use of only two machine screws. The nose moment of the Hearse was designed for use of the 0. & R. .19 engine which weighs 5-1/2 oz. If an Arden .19 is used - weighing 4-1/4 oz - an ounce of clay may need to be added inside the firewall to hold the balance of the model in its indicated position, at the wing trailing edge.

The landing gear is made from 3/32 piano wire and installed by fastening to the front of the firewall with small metal land-ing gear brackets. Use any type light sponge rubber wheel 2 to 21/z in diameter.

Use medium celluloid for cabin windows. Install cabin windows, covering as many sections of the greenhouse area that the size celluloid available will permit, to in-sure neatness of cabin window area.

WING CONSTRUCTION. Note: on the plans the wing tip outlines are laminated, using medium 3/16 sheet for bottom or main lamination, with top lamination being % sheet. Cut the tip outline pieces and cement in place.

Assemble the wing after ribs are cut and notched, spars cut to length and tapered, and wingtip outlines are dry. Lay out com-plete outline of one wing, then slide ribs on to the spars one section at a time and cement into place. Do not cement the di-hedral break ribs in place on the spars until the wing frame is dry. Block up wing to required dihedral (see plan), and cement the overlapping spars and the 1/8 dihedral break ribs. Shape the leading and trailing edge to conform to the airfoil, and the wing tip outlines to conform to the airfoil ribs. Add 3/16 sheet hard balsa gussets to lead-ing and trailing edge dihedral breaks. Plank top and bottom center section of wing with 1/16 sheet as shown on plan. Sand the whole job thoroughly.

The stabilizer is very simple to construct. The stab outline is made from 1/4 sheet. Cut the curved parts of the stabilizer to plan form. Plank bottom center section of stab over plan. Cut and cement lower cap strip ribs into place, Note: these spars be-gin a gradual taper from rib No.5 to each tip. Also note: rib sections 1, 5, & 9 are filled in solid.

Cut top rudder pieces from soft 3/16 sheet. The sub-rudder is cut from hard 3/16 sheet with grain vertical; sand both rudders to an airfoil shape and cement into place on stabilizer.

COVERING. Japanese tissue is suggested for covering. Tissue not only gives a beautiful transparent finish, but is stronger than many modelers believe, when properly treated. I used 10 coats of medium thickness clear dope, adding 10% castor oil to the last two coats to prevent warps.

Little difficulty should be encountered when test flying the Civy Hearse, if the model is well-aligned. Operate engine on rich mixture for first several flights, striving for a nose-up spiral under power, with a fairly tight flat glide. Glide circles of 100 to 3001 diameter seem to be the best thermal snatchers.

It is suggested that the ship be adjusted to circle in the glide the same direction as under power. This insures a smooth recovery at the top of the power run. Use of 'wash-in' in the wing panel toward which the model circles under power is recom-mended.

We advise that the Civy Hearse be trimmed with less positive incidence for windy weather. In the author's opinion, this sort of adjustment applies to almost any model airplane free flight design. Place a small strip of 1/32 sheet balsa under the leading edge of the stab, thus decreasing over-all incidence to 1/16. If the builder does not desire to tamper with the incidence. try balancing the model about 1 in forward from the trailing edge of the wing. This will enable the model to glide 2 to 3 mph faster; when flying in a gusty wind, this will tend to dampen the slight stall that any model may exhibit when it turns from the downwind leg into the wind. The Civy Hearse is a fine little load carrier. Flown without the 8 oz dummy occupant, the Hearse turns in flights approaching its counterpart, the Civy Boy."

Quote: "I hope this is suitable for use. It is drawn via CAD with Electric Brushless Motor and R/C in mind and there is no wing as it uses the Civy Boy 51 (400 sq in) wing. Could use the small 9 gram servos and 2.4 ghz reciever, lipo battery would probably weigh about the same as petrol engine and ignition gear. Regards,
Trevor"

Update 05/08/2020: Replaced vector planfile with a revised version, thanks to Trevor.

Quote: "This is an updated pdf for OZ12303 I have enlarged the drawing 12303 to correct size and then CAD traced it so it is more accurate than my original cad drawing, where I had to use measurements out of the 50's book and I have included the wing sections & wing plan. Although it was originally free flight, I have drawn it for R/C conversion but others may want to do it differently. C of G should still be on trailing edge of wing. Regards," 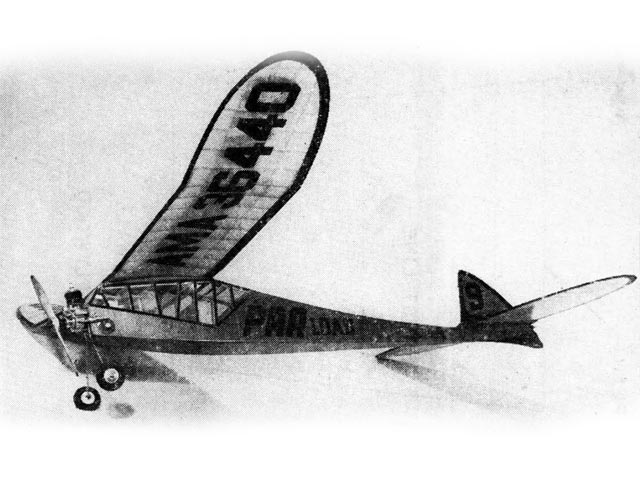