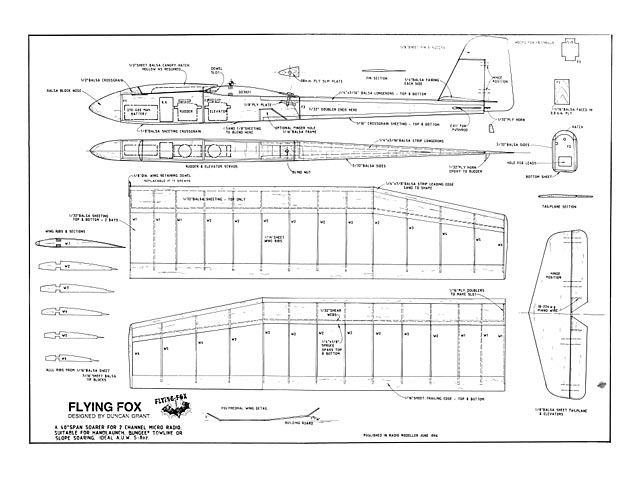 Quote: "Flying Fox. Try this neat, lightweight 'chuckie' by Duncan Grant. It's what your right arm's for!

Flying Fox was designed about eighteen months ago as a 30 in lightweight glider which proved to be a bit of a handful as it was quick and had too much movement for the field. It had the same wing section as the new 40 in version which is SD 3021. After flying the little model on the hill it became apparent that it seemed to handle well in light lift. It was demonstrated to friends and they said they would be interested if it was only ten inches bigger.

So, around the beginning of this year, I set about making the bigger version by scaling it up from the smaller prototype. I kept the same tail group, as there seemed to be plenty of area and movement and it seemed to pay off. Having completed the fuselage it was put away in a cupboard for a few months whilst I designed and made the wings. After doing some changes with the centre of gravity the new 'Flying Fox' proved a delight to fly.

Wings: We will start here because it will give you encouragement to finish the rest of the model once the wings are out of the way! The wing is a standard spar and rib assembly so there should be no problems here. Make sure that you make them as lightweight as possible as this will help the way the model performs.

Cut the spars and trailing edge sheeting to size and pin the bottom spar and a TE sheet to the board. Make the ribs (either free cut or sandwich method) and glue into place. Now add the top spar and the top TE sheet, making sure that you pull the pins out and then replace them before letting the wing panel dry, or you will not be able to get the panel off the board.

Now unpin the wing from the board and glue the leading edge to the front of the wing and again leave to dry. When dry, sand the top of the leading edge to the same shape as the top of the ribs and glue the sheeting in place on the wing panel. Repeat this for the other panels but remember the tip blocks. Trim the inner ribs to accept the wing locating dowel tube, as the dowel is meant to break before the wing does. When all four panels have been built and sanded to the correct shape, join them by butt gluing them together and then reinforce the joints with a small amount of lightweight glass cloth, using thin superglue on the cloth instead of epoxy. This is lighter, seems to have the same amount of strength, and can be sanded smooth.

Next, glue the centre sheeting onto the wing. Add the ply support for the wing bolt. If you are going to use the sheer webs they should be fitted before you add the top sheeting. They are not needed for strength with the spruce spars, and you will save weight if you put only a few on.

Tail: Next the tail group, which should be quick and easy. Start by cutting the tailplane and elevators, lightly gluing them together and sanding them to the section which is shown on the plan. Put these to one side and start on the fin, gluing the two parts of the rudder together with superglue, then leave to dry before tacking the fin to the rudder so that you can again sand the fin to the section which is also shown on the plan.

When you have shaped both the tail and fin, it is time to glue them together. Shape the 1/4 in triangular strip so that they are the same as on the plan, and then glue them to the bottom of the fin post and sand the base down so that they are level and stand vertically. Glue the fin to the tailplane making sure that the fin stands up at 90 degrees, ie straight, and fits perfectly. You can now cut off the elevators and rudder and glue the ply horns on to the control surfaces.

Fuselage: Start by cutting out the fuselage sides and doublers. Place the two sides together, making sure they are the same size by sanding off anything which may be oversize.

Now make the formers. These can be made out of 1/32 ply/balsa/ply sandwich, or 1/64 ply/balsa if preferred. Remember to drill the holes for the wing locating dowel and the snakes. Glue F1 and F2 to one side of the fuselage, making sure they are correctly aligned. Now glue the other side on, and leave to dry. Pull the sides in, making sure that the fuselage remains straight, glue F3 in place, and the back of the fuselage. Now add the bottom sheeting, nose block and front sheet, and the canopy which should be only lightly glued so that it can be sanded down. Do not add the rear sheeting behind the wing, as you will need to cut the slot in the fuselage and add the snakes. When the tubes are glued into place, you can add the rest of the sheeting.

Sand the fuselage to a pleasing shape, remembering that the more you sand round, the less weight the model has when it is finished. Remove the hatch and hollow it so that it is lighter (shown on plan), and sand the back of the hatch so that it sits against the wing when it is in place. If you are using a tow hook, place it in a suitable location and glue into place. I have shown a suitable finger hole method for people who like using them to launch a model; this should be made from suitable 1/16 balsa.

Covering and finishing: My airframe came out at 2-3 ounces minus radio (including covering). The covering material I used was Solarfilm as it helps to add to the strength of the airframe after completion, and does not break as easily as Litespan. But you can use any covering of your choice, whatever you feel happy with.

The original used all-micro radio with a 270 mAh NiCad, but it now uses a 50-100 mAh NiCad which seems to help the way the model performs. The model has plenty of room for a mini radio, but this takes some forethought and some care. The plan shows both types of installation, for the 270 NiCad and 50-100 NiCad - the radio gear needs to go into different positions for each, to get the correct centre of gravity. I used 22 swg wire as the push rods, with Z-bends at each end for attachment to the control surfaces.

If you use a breakable dowel, the best things to use are cocktail sticks as they are just the right size and strength for the job. They seem to break if you hit a post or just make a mistake when landing and hit a wing. The breakable dowel has saved my chuckie many times - like the time I let someone fly it who crashed it into a tree; the only damage was the broken dowel.

The canopy should be just stuck on with a bit of sticky tape, which avoids any problem with latches, and also saves weight.

Flying: The model started off with the centre of gravity about 4mm back from where it is stated on the plan. It proved to be a bit lively, rolling faster than most models and flying inverted as long as you wanted it to, as well as getting lots of height on a launch, allowing it to do a couple of circuits of the field. This inspired a friend to make a second 'Flying Fox' so that he could also have something to chuck around the field. After a while I changed the CG to where it is now shown on the plan, as it flies better through lift, and has a better glide angle and speed.

A pal of mine, Matthew Jones, built his own Flying Fox and decided one day that he was going to find out what the model could actually do in a small field. He was making the model go up on a bungee, and, at the top, he put it into a spin which was so slow he could land it while still in the spin. But this wasn't good enough, and he decided to try it inverted - he succeeded!

Play around with the CG starting where stated, until you find the correct position for you. Flying Fox goes up well on a mini-bungee and gives you a better chance to stooge around hunting for lift.

Thanks to Matthew for helping with the development of the model, and thanks to Alan Perrin for building the model for the article, and helping with the photographs. I hope that you enjoy this one as much as we have! " 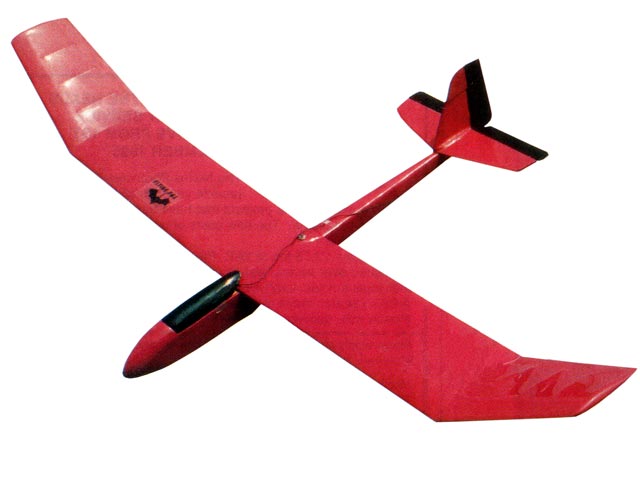