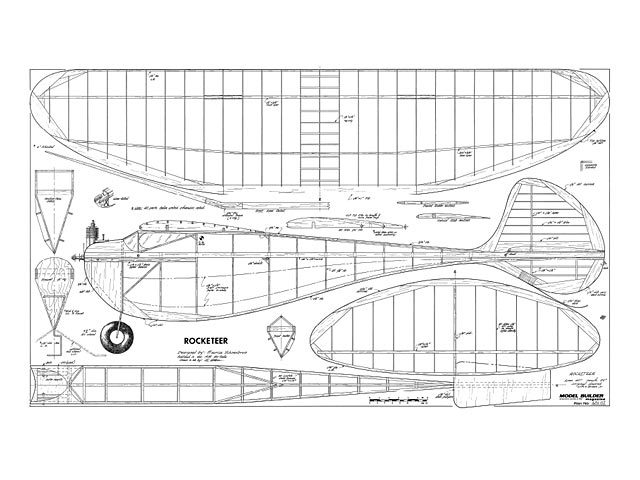 The original Rocketeer (oz1083) design was first published in Air Trails Nov 1939. This here is a later redrawn plan by Al Patterson, in MB 1981.

Quote: "Old Timer of the Month: The Rocketeer. Designed by Maurice Schoenbrun. Redrawn by Al Patterson. Text by Bill Northrop.

The Rocketeer was one of several deep-bellied designs that came out of the Brooklyn Sky-Scrapers club back in the late 1930s and early 40s. It's hard to tell who from this well-known brew-pot of noted modelers and popular free-flight designs was the first to come up with the idea, but the basic shoulder wing. long nose moment, deep forward fuselage concept enjoyed many varia-tions. Just to get an argument started, it states in the November 1939 Air Trails construction article about the Rocketeer that: It is not a beauty, resembles no plane under the sun, large or small, but it performs in a manner that is really sensational. If the above is true, then Maurice Schoenbrun gets the credit for being first. And our own feeling is that his later ship, the Gladiator (oz4) was the peak design of this concept - letters may be addressed to the Editor's attention!

The fuselage is built on a basic 1/4 x 1/2 crutch which is assembled over the top view. The V-shaped bottom is then built on while the crutch is still on the board. The rectangular cabin section is added next, and then the rest of the top aft section is triangular.

The optional 2-wheel gear provides a nice, legitimate ground handling system for an R/C assist version of the Rocketeer.

Only a couple of wing ribs are shown, although the wing tapers considerably toward the tip. For this reason, we quote the original article on how to cut all ribs to size: Cut a total of thirty-one ribs from 1/16-inch, making all of them exactly the same as R-1. Leave nine of them untouched for center section. The rest of the ribs are cut, from the trailing edge, to proper size. This will leave the rear rib tips of eneven depth. Measure up one-quarter inch from the bottom on each of these ribs to be formed at the trailing edge, and lay the template of R-1 upon these ribs, making sure that the V notch at the leading edge coincides in both ribs. A better method is to insert a pin about a quarter of an inch back on the template of R-1 and through the rib to be cut. Then move the R-1 template down until the top surface line meets the quarter-inch mark, and with a pencil draw the resulting curve on the rib to be formed. This will accurately form the top surface of the rib you are forming.

Make the ribs in pairs, for example, if you form R-6 by this manner, make another rib exactly the same. In this manner you may form the entire set of ribs. As for that trailing spar, note the measurement of R-10 in the wing dia-gram. Once the ribs are in proper position, bring the trailing spar to the point where it meets R-10 and mark the place where it crosses each rib. Make a notch in each rib at this point, and you have the proper mounting position.

Flight adjustments for the Rocketeer start with balancing halfway back from the wing's leading edge, and trimming the glide by shimming the stab up or down. No toucha da wing! Start with about two degrees left thrust (yes, l-e-f-t) and about 3/16-inch wash-in on the right wing panel. Adjust rudder for a tight right circle in the glide.

Properly adjusted, the power pattern is straight up with a slight left turn producing four to five complete rotations when the engine cuts. The original used an old Brown model D (easier to find now than a new model D!)." 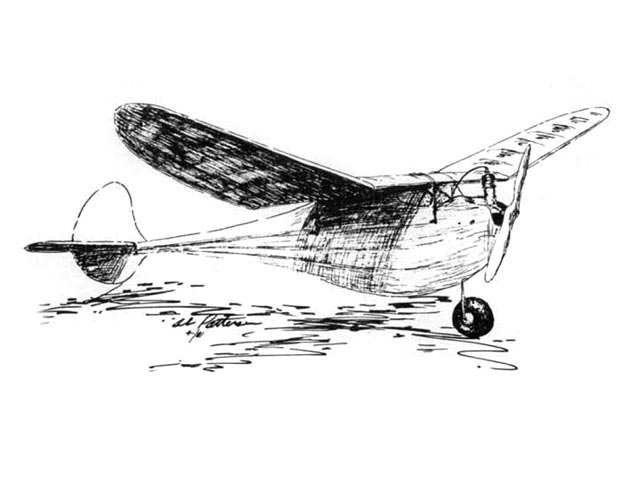