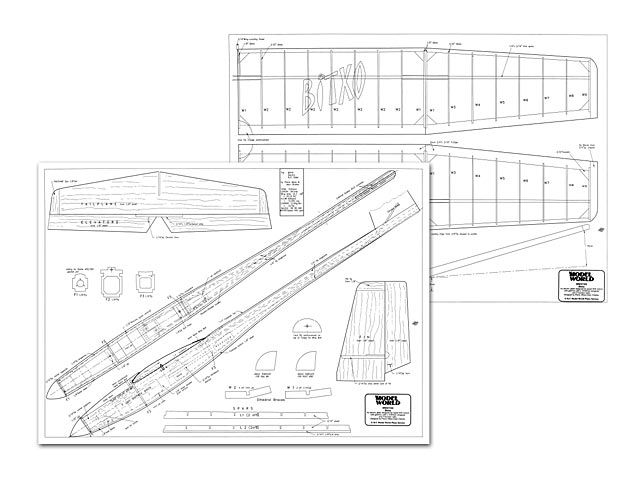 Bitxo, pronounced BITCHO, is the name of an insect common in Catalonia which buzzes around without stopping! Much the same as the daughter of one of your scribes who has the same nickname. Hence the name of this little electric powered model designed to allow us to fly in a field local to our homes at any time of the day or night without more preparation than charging the batteries occasionally!

One thing is certain with this model, and that is you will get a stiff neck before you run out of battery power! The model has been developed from an earlier hand launch glider and is little more than an electrically powered version of the same in both lightness of structure and general outline. With a small motor and ample battery capacity all you will need to do is use the motor at intervals to regain height and then enjoy some more gliding around! Construction is really pretty simple, following normal kitchen table building methods, but we will give a few pointers for each main section to help relative beginners follow the detailed plan.

The Wings: The ribs, of SB96LM2 section, are cut by the sandwich method, trapping the right number of blanks between carefully prepared ply templates of the section, and then shaping them by cutting and sanding. The centre section of each wing is of parallel chord and this makes it easy as the ribs are identical, and for the outer panels we suggest you adjust the ribs by slicing from the top profile a piece of balsa, guided by moving the ply template down across the rib until the trailing edge meets the length required.

The main spar construction is shown on the plan and you must first build up the internal parts, then add the top and bottom longerons. Also prepare the leading and trailing edges from suitable balsa, cutting in the slots for the ribs neatly.

When ready you can assemble the wind panels using cyano glue, and leave them to set. Note the angles on the panel end ribs to take up the dihedral, and also that there is no sheeting areas on this wing, just some large gussets at the centreline and at each panel joint.

The Fuselage: This is simply made but gives the look of a moulded GRP item. The basis is a plain balsa box with very rounded corners and the front end reinforced by cross grain sheet as shown on the plan. Before sheeting the top of the fuselage remember to insert the linkages from servo to rudder and elevator, making sure they are well secured so they do not flex under pressure.

As this is an electric motor powered model you will need to allow for cooling air, and we use two inlets on the sides of the nose, and then an outlet on the top just behind the wing seating. This cools all the working items including motor, speed controller and batteries.

Do not fix the radio plate until the last moment as you can use this to adjust the CG position, fixing it in the best position after a trial balance of the completed model. Note also that the motor has an additional mounting plate to take some of the stresses off former 1.

To finish the fuselage sand in the normal manner, apply a piece of fibreglass tissue to the underside of the nose to protect against gravel rash, and then cover with your favourite film such as Oracover.

Fin and Tailplane: These are of simple construction and must as always be kept as light as possible. The fin is cut into the top of the fuselage and you will need to trim the top skin and corner fillets to give room for it to pass through to the bottom skin. A good joint is essential as the fin is quite tall, and it also carries the tailplane and elevators. Hinges can be any system you like, but simple bandage is quite OK.

Radio Installation: It is necessary to use items which are as small and light as possible, consistent with your budget, and we used one of the new Multiplex Pico 4/5 receivers situated behind the wing. This is connected to a Robbe RSC118 with BEC. With a current rating of 18 amps this should be enough!

As previously mentioned the servos, again micro size, must be secured in place at the last minute, and their mounting plate is screwed to two side pieces of timber, which allows for later adjustment.

Motorisation: The total cost of a suitable motor for a relatively small low power model such as Bitxo is not that great, so we decided to invest in the up market option of a Robbe Planeta 400, which has the advantage of a small diameter reduction gear which in turn allows a slim fuselage profile. At the same time the 400/35 spec motor is designed for an 8 cell pack, and if you run it on seven, a small weight saving, it will still have ample power for this model, even with a large diameter prop.

After a lot of experiment we ended up with a 13 by 8 Falco prop. This is 330mm diameter, yes really, and this with a Speed 400 and a current drain of only 8 amps - very acceptable! The Falco is a carbon prop sold in France by Topmodel, but there will be near equivalents in other countries if this is not available. The battery pack is seven Panasonic cells of 1080mAh, which are lighter than the standard 500mAh red cells. Finally, don't forget to suppress the motor as usual.

We naturally recommend this combination to you to give plenty of air time, but if you find more efficient combinations then you may end up with enough capacity to fly from dawn to dusk even mid-summer in Finland!

Flying Tests: This model is definitely not a stunt model and you should treat it as a hand launch glider except that the motor gives you the chance to use sites not suitable for a pure glider. The motor gives ample power for a climb out, but don't use too steep an angle, and take it easy on the turns. Likewise you will find the model sensitive to rising air and you will have no difficulty in thermalling in the right conditions.

During our first flights we encountered some problems with the very large diameter prop not folding properly, possibly because the airbrake facility in our speed controller was not strong enough to handle this very large blade area. As a result we ended up with the model spiralling down and generally making life difficult for the pilot. At least this proved that the controls will handle such instability without too much of a problem!

After various attempts to add a tensioning elastic to hold both blades folded back, we ended up making up a single blade prop, by static balancing one blade with a lead weight, but you will need to use a prop balancing kit to give accurate results. This solved the non-folding problem and the single blade still gave plenty of thrust.

As a lightweight, low cost and low pow-ered motor-glider Bitxo should give you lots of air time, and if you go flying on your own you may fall asleep before the power runs out! Better to take a friend with you to share the fun! " 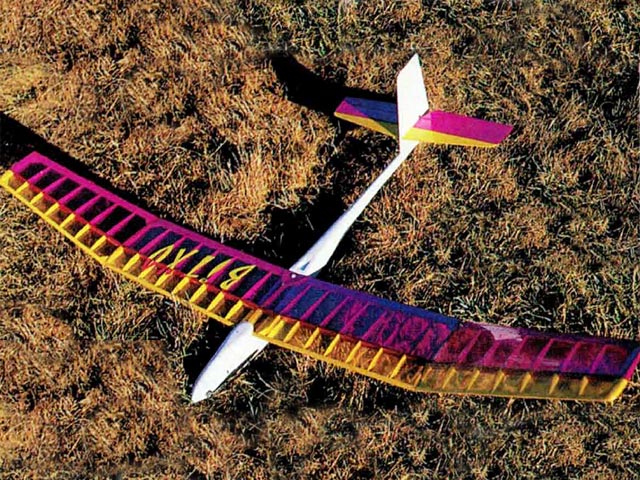