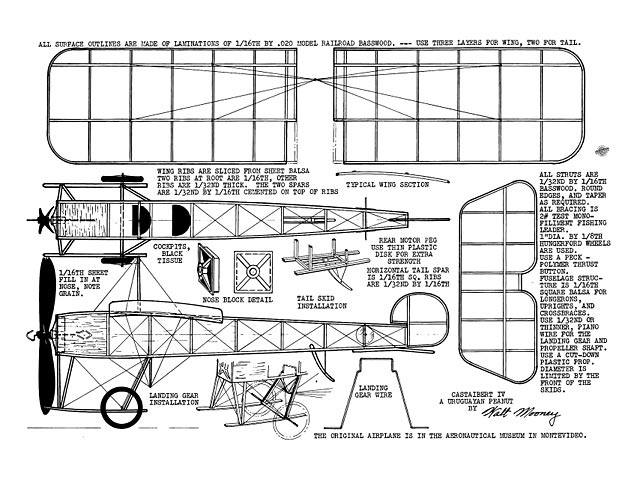 In this little model can be seen the influence of Louis Bleriot on the creations of one of the pioneer aircraft designers in the new world. The three-view that inspired this model was found in an Argentine aircraft magazine. The basic shape looked suitable for a lightweight peanut scale model. Unfortunately, the skid-type landing gear does limit the size of the propeller - unless you are willing to lose some scale points by shortening the skids in favor of getting more flight points with a larger diameter prop.

The original model flew, right off the board, as we like to say. And this was true, as long as we kept the power down to where the model would just barely climb. But when attempting flights with maximum winds, the model was found to have inadequate vertical tail area, which would result in a tail wagging maneuver that would tend to end up in a spin. This obviously is due to the fact that the body is uncovered behind the wing. I filled the aft bay of the fuselage with a thin sheet of clear plastic, relieved to give clearance for the back end of the motor, and this cut down the problem. But the model still has a tendency to Dutch-roll. Probably the surest cure would be to cover the aft fuselage with thin celluloid, but don't do it until you find you have the problem; not all models built from the same plans fly exactly alike.

The construction of the Castaibert IV is in the good old traditional style. It has a box structure fuselage, tail surfaces built directly over the plan, and a two-spar wing. Since the basic structure is so standard, we'll try to cover its few points that are unusual.

All of the flying surface outlines are made of laminations of model railroad basswood. The basic basswood size is .020 by 1 /16 inch. Three laminations are used for the wing outline and two for outlines of the horizontal tail and rudder.

The wing spars are 1/32 by l/16 basswood. Because the wing ribs are sliced, I decided not to notch them for the spars, but to simply cement the spars onto the top of the ribs. The result looks good and gives some turbulation to the upper surface wing airflow.

The front 'bay' of the fuselage is filled in with 1/16 sheet; both sides, top, and bottom are filled. Note the grain direction.

The nose block is built up to simulate the structure on the front of the original airplane. Use a 3/16 thick balsa back block just sized to fit snuggly in the nose of the fuselage. Cement to this a 1/32 plywood face exactly matching the outside dimensions of the fuselage. In the center of this is cemented a 1/8 inch length of hardwood which has been shaped into a 5/16 diameter bead with a hole in it sized to fit the Peck-Polymer thrust button. Small diagonals of scrap balsa run from near each corner of the front of the plywood to the center bead. The front face of the plywood is painted flat black and the diagonals, bead, and outline of the plywood are painted silver.

The landing gear wire is installed by cementing it in the proper place in the fuselage.

Before covering the fuselage, the diagonal bracing should be installed. Using two-pound test monofilament line, start at any corner and wrap the fuselage, going diagonally around it with a continuous strand. When you get to the other end, tape the strand in place and cement the brace at the corner of each bay. Proceed this way until all the brace wires are in place. Be careful while wrapping the braces on the fuselage not to pull the fuselage structure out of alignment. Install the tail skid as indicated in the sketch. The skid can be plywood or hard balsa. The side braces are thin music wire.

Cover the proper panels of the fuselage with tissue paper, then add the king posts, top and bottom, for the wing brace wires. The landing gear struts and skids can be added at this point. Again, model railroad basswood was used. When the strut installation is dry, add the brace wires. Cover the wing and tail surfaces on both sides with tissue. It will have to be glued to the bottom of all the ribs.

Wings and tail pieces can be cemented in place on the fuselage and then the brace wires added.

The propeller installation is standard except that its diameter is limited by the nose of the skids. If you make the diameter of the propeller as large as possible - that is with minimum skid clearance - it will be important to balance the propeller to keep it from vibrating so much that it hits the skids and damages the model.

A really lightweight version of this model could be built by replacing all the basswood with firm balsa of the same dimensions. If you only fly indoors, this is to be recommended. A stronger model, as designed, is recommended for outdoor flying.

Flight trimming has been discussed in many articles and there is not much to add here. One thing is worth suggesting, however. Use a winding tube when flying this model so as to protect the fuselage from breaking motors. With the fuselage structure open and full of diagonal braces, a blown motor can be disastrous, as it wraps up in the brace wires and pulls the model apart. With that caution in mind, go have fun flying your Castaibert IV." 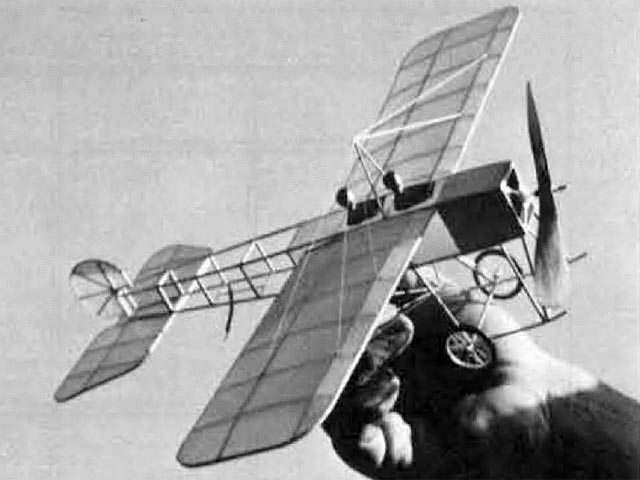