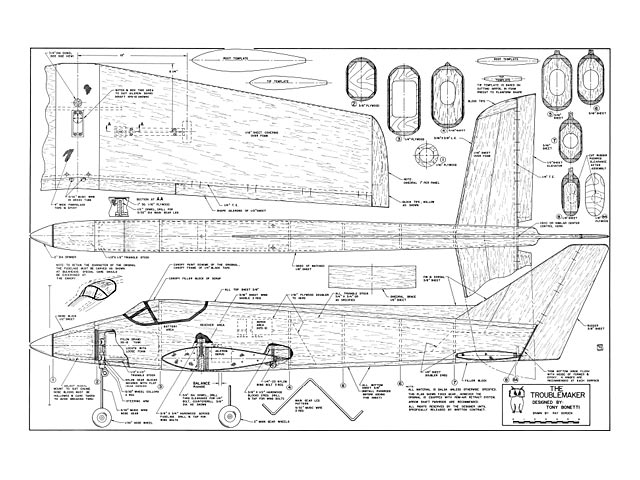 Note photo of completed Troublemaker model (by dave_anderson) was found online at https://www.rcuniverse.com/forum/classic-rc-patt...

Note this plan file is derived from the scan posted by Lowrider1960 on RCGroups (see datafile). This here is the same plan, after cleanup [see pic 004].

After knocking around for a number of years in this wonderful hobby of ours, flying anything from 10 cent gliders to full house radio control, I finally decided that R/C was where it was at for me and this is where I would concentrate the bulk of my interests. To date, I've never been disappointed with that decision. I have, however, been most disappointed with the quality of some of the kits on the market that I foolishly pur-chased without first consulting someone who had built and flown that particular model before. Anyway, in the process of looking for a good pattern ship (not one that looked like everyone elses), someone recommended Tony Bonetti's Trouble Maker. J&J Industries, 3415 Sunset Ave, Wanamassa, New Jersey, manufactures the kit which sells for $59.95 but a thorough search of many hobby shops couldn't produce one. It seems that the demand was greater than the supply, and with the shortage of good quality balsa wood lately, even J&J couldn't supply one immediately. After putting through a couple of calls to J&J and pleading with a guy named Tex, I finally received my Trouble Maker.

From the minute my grubby little fingers opened the lid of that box, I knew that I had made another favorable decision. It was well worth the wait since the kit showed no evidence of poor balsawood. The die-cutting was of excellent quality and the general appearance of the kit was one of neatness and professionalism. The bulkheads are bandsawed. There is a complete hardware package, as well as landing gear blocks, gears, and a lot of other small items that you sometimes have to purchase separately on other kits. The plans and instructions are clear enough that even a dummy like me can read and understand them.

Construction is all balsa and conventional in many ways with balsa sides and plywood doublers with triangular reinforcements along the top and bottom of the fuselage sides. Before starting, be sure to mark out the location of the bulkheads on both fuselage sides and drill holes through the bulkheads for the type of pushrods you are going to use. The triangular stock provides you with two things: strength and plenty of meat when transfering the square-cornered fuselage to one that has an oval shape. One problem here was that the triangular stock in the kit is 1/16-inch larger than shown on the plans. It must be trimmed to match the angles cut on the bulkheads.

Throughout the construction, be careful to check for proper alignment of the bulkheads in relation to the fuselage sides. Remember that crooked airplanes fly crooked!

The stabilizer is built up of ribs and covered with sheet balsa. J&J was thoughtful enough to provide little feet on the ribs to help you build a true, warp free surface. The elevators, fin and rudder are all of sheet balsa, precut ready to be sanded to an airfoil shape. If you purchase an early production kit the stabilizer will be cement-ed to the bottom of the fuselage. Later kits have an improvement in this area, showing a bolt-on unit which makes getting at the elevator clevis adjustment a lot easier. It is a simple matter to modify your kit if it is an early one. Just cement two small hardwood blocks inside the rear of the fuselage and drill and tap them as you would for a wing hold-down.

A nice feature of this design is that the stab mounts on the bottom of the fuselage, making alignment relatively easy. The plane has a tendency to be nose-heavy, and you can efficiently overcome this by making the stab from 1/2-inch sheet balsa - then you won't have to add lead weight to make it balance.

Going to the opposite end of the aircraft you'll find adequate room for even the largest .60 sized engine and a 12-ounce tank. I built my Trouble Maker without retracts which allowed me to use a conventional Pylon 12-ounce square tank. If you go to the retracts, you'll have to install a slim line tank like the one Norm Page uses in his Mach 1. Inside the fuselage there's enough room for any system around. I used a new series Royal Classic which I like very much, and I had all kinds of room to spare. You could almost store golf clubs in there during the off season.

The wing is built up and sheet covered similar to the stabilizer. Once again, J&J provides those little feet on the ribs to help build a true surface. One of the things to watch for if you've purchased an early kit is a minor error on the ribs concerning the landing gear block cut-outs. Since the wing is built upsidedown, the cut-outs for the landing gear blocks should be facing you. Unfortunately, they're not. Through a miscut, the notches were cut on the wrong side of the ribs..." 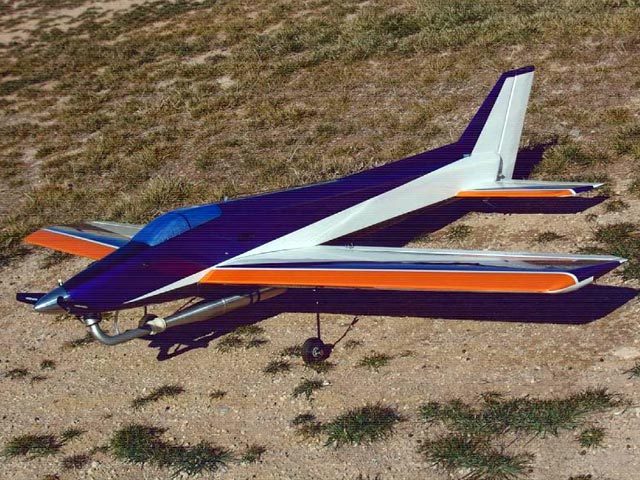 Hello! Nice to have the Troublemaker from Tony Bonetti, it is already saved.
However I still wanted to ask for the Intrepid, also from Tony Bonetti. It is a further developed version from Troublemaker with anedral on the stab...
Thanks for your altruist job.
Fábio Gil - 27/06/2020
Fabio... I don't believe the Intrepid was ever published in a magazine or kitted. Tony Bonetti won the 1981 US Nationals with it, so it remains a mystery why no one tried to capitalize on that. From photos, it appears that the Intrepid was a stretched Troublemaker with enclosed pipe. Maybe wingspan was increased a bit too.
RC Yeager - 27/06/2020
Add a comment