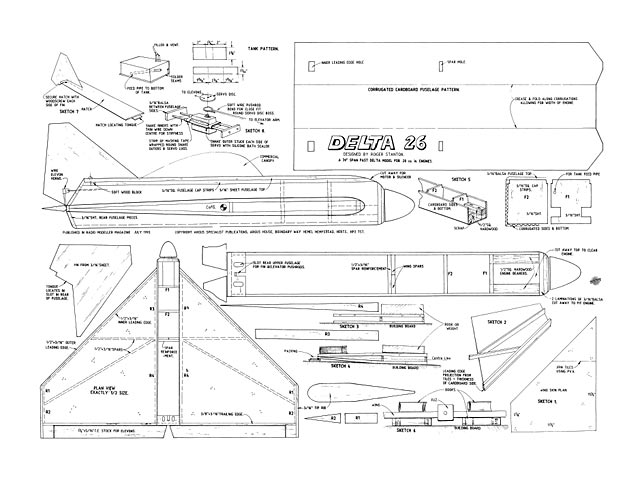 Quote: "Although I prefer 60-70 four-stroke powered models with a semi scale appearance, I do like to have a simple, hand launched, diesel powered 'bomb' available as well. This I can sling in the back of the car on those days when the weather is a bit marginal or I'm short of time.

Delta 26 is just such a model and being largely made of cardboard and ceiling tiles - it doesn't cost much either! In fact the only balsa required is one length of 1-1/4 x 5/16 Trailing Edge stock and two sheets of 3/16 x 3 x 36. You will also need a short length of 1/2 in square hardwood for the engine bearers. PVA glue was used for all joints.

Let's start: Construction starts by making four wing skins out of polystyrene ceiling tiles. The ones I used were about 3/16 thick and I found that they could be cut easily with a sharp modelling knife (Sketch 1). The 1/2 x 3/16 inner leading edges and spars are now glued to the lower skins (Sketch 2).

When dry, the top skins are added but apply glue to the leading edges and spars only as the trailing edge joint is not made just yet. Weight down each wing half with books until the glue has set (Sketch 3). The lower skin trailing edges are now packed up with spare tiles, glue is applied and the upper skins are bent down to make the trailing edge joints. Again, books (or weights) are used to hold things in place as shown in Sketch 4. Scrap foam tile ribs R1, R2, R3 and R4 are fitted at the tip and root positions.

The main structure of the fuselage is made from any corrugated cardboard you have lying around. Mine was about 1/8 thick and the pattern is shown on the plan. The distance between the corrugations at which the side bends will be made can be varied to suit the width of the engine to be used. Holes are cut as shown for the wing spars and leading edges. Using a long ruler, the cardboard is creased and bent along two of the corrugations to form the fuselage sides and bottom. Formers F1 and F2 (3/16 balsa) are now fitted. The 1/2 square hardwood engine bearers are glued onto the fuselage sides and into the cutouts in F1. The gap between the bearers and the fuselage bottom is filled with scrap balsa (Sketch 5).

Drill the bearers and fit blind nuts before doing this if you don't like installing the engine with self tapping screws. I used a tinplate tank as shown on the plan, but the spacing between F1 and F2 can be adjusted as necessary to accept a commercial item at the expense of some space for the radio gear. After fitting the tank the 3/16 square fuselage cap strips and 3/16 sheet top are glued in place. The top extends a short way behind F2 to provide a location for the hatch tongue. The fuselage nose is finished off with two laminations of 3/16 balsa which are shaped to match the spinner.

After checking for an accurate fit, the wings are now glued to the fuselage, with a piece of 1/2 x 3/16 balsa reinforcing the spar joint. Correct alignment of the wings can be achieved by resting the flat bottoms of the wings on books of equal thickness as shown in Sketch 6. When dry, the 3/8 x 3/16 trailing edge strip and 3/16 sheet fuselage rear pieces are fitted. Note that the upper piece is slotted for the elevon pushrods and the fin tongue. The 3/4 x 3/16 outer leading edges, the 3/16 balsa tip ribs and fixed pieces of 1-1/4 x 5/16 trailing edge stock are now added and shaped.

The removable fuselage hatch and fin are made from 3/16 balsa. Note the grain direction for the fin. A small tongue of scrap ply locates the front of the hatch under the fuselage top and the hatch rear is screwed to a small softwood block between the fuselage sides. The fin is glued permanently into a slot in the hatch and an additional tongue locates into the rear fuselage slot when the hatch is in place (Sketch 7).

I covered the wings in clear blue Solarfilm (taking care not to melt the tiles!) and painted the fuselage with gloss red Humbrol. An alternative for the wings would be tissue or gift wrap paper applied with wallpaper paste and fuel proofed. Small strips of emery paper were glued to the fuselage sides beneath the wings to provide a grip for hand launching. A commercial canopy improves the looks and the elevons can be hinged using your favourite method. Wire aileron horns with screw-on plastic connectors for the devises are recommended.

R/C installation: I used standard size Fleet radio gear which was a tight fit, even with only two servos. Mini gear and/or electronic mixing would help a great deal, but the mechanical mixer made from Sullivan snake off-cuts shown in Sketch 8 works well and is very smooth in operation. Elevon movement was set at 3/16 up and down when used as ailerons only and 1/4 in up and down when used as elevators only. Use the battery position to adjust the centre of gravity. The all up weight should be about 2lbs.

Flying: With the engine on full song, the model needs a good, bard, straight launch. Be prepared for an initial torque roll to the left, but this is easily corrected providing the launch was OK. Even with a PAW 19 the model is very fast, with an Irvine 20 it would be hypersonic! When the engine cuts the glide is fast, but safe. Be careful not to try and stretch the glide because, like all deltas, the drag (and therefore, rate of sink) rises rapidly as the nose comes up.

Delta 26 is a cheap, good fun model for reasonably experienced fliers. Its simple design is very adaptable and it could easily be scaled up for larger engines if required. Don't worry about the crude wing section as Control Line fliers have used it successfully for many years. It certainly works well on Delta 26!" 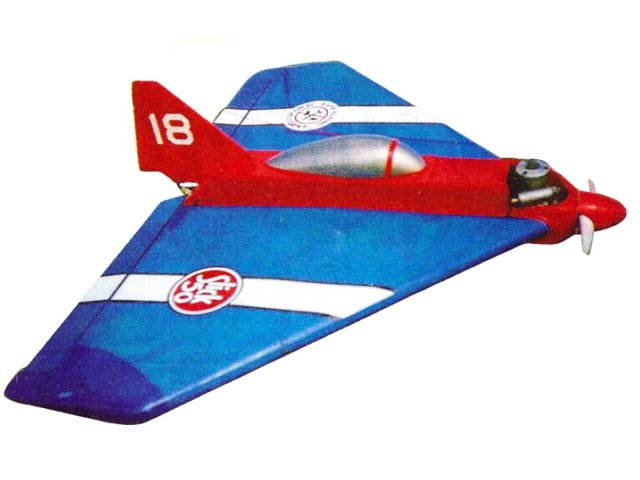