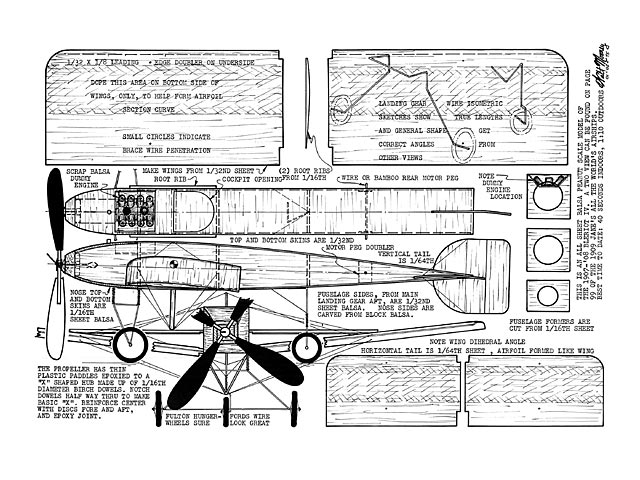 Note (see comments) this plan is titled - by the designer - as Bleriot IV but seems to be a model of the actual Bleriot VII aircraft.

Quote: "This model should get the fence-sitters into action - it's all sheet balsa construction, and turns in flights that can keep the stick-and-tissue set on their toes. Bleriot had a better idea.

Did you ever want to build a model with a scale size tail? Well, here is your chance. This is an all-sheet model of an early Bleriot IV monoplane. Although the real plane was not too successful (1907-'08 was early enough that about the only successful airplanes were rights, er, ah, Wrights). It is just plain great as a model. The tail size is ideal, there is adequate dihedral, the landing gear is long enough to allow a large enough model propeller, the wing section is thin enough to be properly represented by sheet, and the fuselage structure has a square cross-section.

This model was designed to be built by the whole Mooney family to use at the 1974/75 Las Vegas New Year’s peanut scale competition. It was hoped that this sheet model would be competitive with the stick and tissue Peanuts. As it turned out, only two of them got built in time for the contest. Best time for the model under a 25 foot ceiling, was an official 40 seconds and third place overall in the contest. The other model did 39.8 seconds, had a few more scale points, and would have placed second except that another entry by the same entrant (the author) had beat it out by a couple of points, and only one prize was allowed per entrant.

We'll have to admit that first place was taken by a stick and tissue model, and that several of the tissue covered models put up slightly better times. Nevertheless, this model is an excellent flyer and will give all but the really lightweight Peanuts a real run for their money.

Generally, all sheet balsa models are simpler to construct than the stick-and-tissue ones. This Bleriot IV is no exception to that rule as far as the basic wing, tail, and body structure are concerned, and the following article will touch on basic construction only lightly. (How'd you mean that 'lightly,' Walt?) However, it is the details that make this model, and they are somewhat complex, and will be covered more thoroughly.

Start the model by looking at the plans and determining all the balsa parts that need to be made. The fuselage sides from the main landing gear aft, the top and bottom of the fuselage, the wings, the wing leading edge doubler, and the motor peg doublers, are cut out of 1/32 sheet balsa. The horizontal and vertical tail is cut from 1/64 sheet. The fuselage formers and the top and bottom sheeting for the nose is cut from 1/16 sheet. The fuselage nose sides are carved from block balsa, or from 3/8 sheet, if you have a small piece available. The extreme nose of the model fuselage consists of a plug made up of a piece of 1/4 and a piece of 1/8 balsa. If you don't have some of these sizes in your scrap box, laminating the thicker pieces out of layers of 1/16 sheet will work well.

Assembling the basic structure is quite simple. Note the direction of the grain in all the parts. Because the nose of the Bleriot IV tapers down quite rapidly in the plan view, and bending a full length sheet fuselage side that much would require a lot of nose formers and patience, we opted for thicker stronger sides at the nose. Cut the blocks to match the side view. Cement them in place on the front face of the first former. Then cement the nose top and bottom skins in place. When all the rest of the fuselage has been assembled and its cement is thoroughly dry, the nose can be carefully carved to the shape shown in the top view. Note that the nose was of square cross-section all the way to the very front, so don't accidently sand round corners on it.

Before assembling the wings and tail to the fuselage is the best time to add rib, spar, and structure indications on the model, if desired. The real airplane was completely covered with fabric, not left open on the aft end of the fuselage as on later Bleriots. Therefore, the markings are not absolutely essential, but if done rather subtly, they look good on an old fashioned airplane. I used a light brown felt pen for the ribs, spars, longerons, and uprights. I used a light grey felt pen for the wire braces.

When developing the airfoil section of the wings and horizontal tail pieces, use thin dope and only one coat. With this thin wood it is easy to get too much curvature if too much dope is used.

The tail pieces are simply cemented in place on the fuselage; make sure they are properly aligned.

Add the two-piece, 'V' shaped wing bracing post to the bottom of the fuselage and then add all the bracing wires. Two-pound test monofilament fishing leader was used on the model in the pictures. I like it because it is strong, light, somewhat resilient, and can be tightened by the application of a little heat. Thread also will work for the bracing.

The propeller on the original Bleriot was a four bladed paddle affair, so we decided the flying propeller could easily be scale-like in shape, although larger in diameter. Clear .015 plastic was used for the paddles. A couple of large sequins provided the plastic discs for the front and back of the hub. Don't forget to put a prop shaft hole in the birch dowel assembly before bonding it all with epoxy. A short length of prop shaft wire through the hole while the epoxy is setting up is required. Twisting it carefully with a pair of pliers, while pulling it out, will make removing it from the hub easy. Epoxy the paddles to the dowels at about a 35 or 40 degree blade angle. Paint the propeller silver with plastic model paint.

The landing gear wires are a little complex to bend, but with a little care they are not hard to do. In the right wing panel are isometric sketches of the landing gear wires. All the lengths shown between the bends are true lengths. The angles, of course, are not true in the isometric, but are correct in the front and side views. The gear is bent so that it is attached to the outside of the bottom fuselage skin.

The main gear is much more complicated than the simple wire, and the rest of its members are made up of thin strips of model railroad basswood cemented in place. Let these pieces touch the wire but do not cement them to the wire. This allows the wire to absorb a landing shock without putting any load on the wood parts of the main landing gear. Monofilament 'wire' was used for the rear landing gear brace. Wrap thread around the uprights to simulate the springs. Paint the landing gear details black. I used Fulton Hungerford's wire wheels. FH Wheels, 1770 Lilac Circle, Titusville, FL, 32780. These wheels are not cheap but they are really quality products. Besides, they will outlast two or three Peanuts, so the price isn't too tough to take. I recommend them.

This model is easy to fly, but it has one characteristic that will surprise you. It wants to turn right under power. This right turning tendency is caused by the large sub-rudder. The rudder is shown in the top view as bent to turn the model left. With this amount of rudder adjustment, the model flies in large right turn circles and works very well indoors. Outdoors with more power, it works well as long as there is any power being developed by the rubber motor. It will spiral dive to the left in the glide, however. For outdoors, it might be better to use left thrust line adjustments rather than the left rudder to cure the right turning tendency." 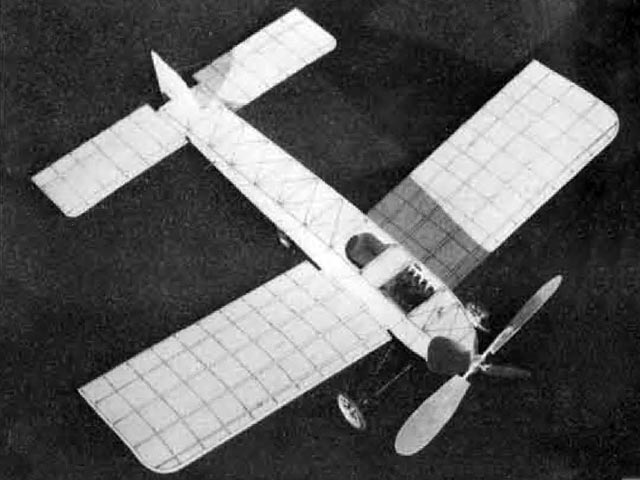 Whenever I look for the Bleriot IV on line, I get pictures that look very different from this model. OTOH, a search for the Bleriot VII, I get something very similar to this model. Perhaps someone slipped up, possibly at Model Builder??
Lincoln - 26/10/2020
I apologize for any confusion regarding the proper identification of this aircraft. The responsible parties for this error would be Walt Mooney (not Model Builder) for identifying his plan as a Blériot IV and myself, for not properly researching the aircraft prior to submitting this plan to OZ. The type III and IV Blériots were biplanes with an elliptical tailplane configuration, quite different from this monoplane. This model almost certainly represents a type VII, circa 1907. Accordingly, the scale type should be changed from Blériot III to Blériot VII: https://en.wikipedia.org/wiki/Blériot_VII
Jan Novick - 26/10/2020
Got it, have changed the listing now. Many thanks.
SteveWMD - 27/10/2020
Add a comment