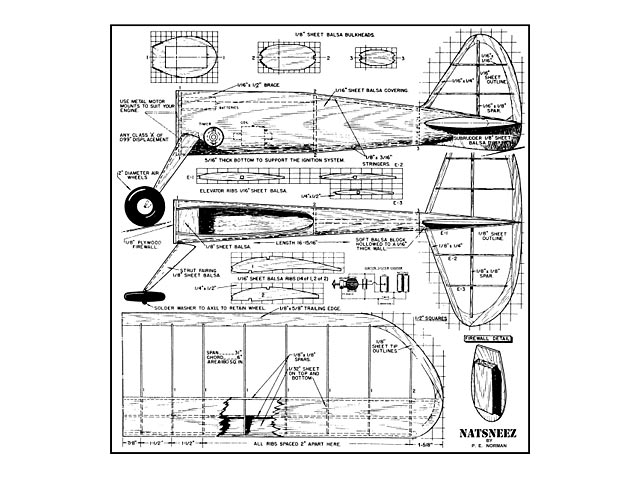 The Natsneez (oz2251) design was first published in Aeromodeller Nov 1944. This here is a later redrawn version in the American publication Aviation Adventures & Model Building, in February of 1947.

Scanning by JeffMac, cleanup by rchopper56.

Quote: "THIS model gained so much popularity in England, where it was presented to their modelers by Aeromodeller, the leading model publication over there, that permission was obtained to reproduce it here.

Designed for a .099 engine, the ship is compact and turns in consistently good flights. The rather unusual construction of the fuselage proved itself really rugged when the ship was flight-tested by the editors.

The plans are half-size. Scale them to full size or have them photostatted twice up. There are only three bulkheads in the fuselage and these should be cut first using 1/8 inch sheet balsa. The block along the bottom is glued in place and shaped when the glue is dry. The sides are 1/16 inch sheet balsa, 'eased' around the curve of the bulkheads, glued and pinned until dry. The 1/16 x 1/2 braces shown on the plan are glued in place as the sheet covering is pinned in place along the top edge. The 1/8 x 3/16 stringers are primarily to hold bulkhead No. 3 while the covering is applied - the covering will take the loads on the assembled model.

A tail block is carved to shape and slots cut into it for the stabilizer. This block need not be hollowed out, since its weight is negligible. The sub rudder, rudder and stabilizer are built next and glued permanently in place. The landing gear is bent from 3/32 inch diameter music wire and cemented to the bottom block as shown on the plan.

Coil, condenser, batteries and timer should next be located as shown on the plan and the wiring installed as Per the diagram. Check for spark before installing the engine. The mounts shown dotted are for an Atom; the bare firewall (1/8 inch plywood, cut to the outline of the front of the model and glued in place) will suffice for the Arden.

The wing is tackled next. Ribs are cut from 1/16 inch sheet balsa, tips from 1/8 inch sheet and the wing assembly started. The lower spar is pinned to the bench, the ribs are glued in place and the leading and trailing edges added. The upper spar can he added last. The sheet covering is glued in place with pins to hold it until dry.

The wing and tail are covered with Silkspan and doped with three thin coats. Add the wing dowels by drilling through the fuselage and you're about ready to fly.

After the test flights have shown whether the model glides properly or not, you can go after finer adjustments. If the model glides too steeply, add a strip of 1:16 inch balsa under the leading edge of the wing. If it stalls a bit, add a strip under the trailing edge until the ship glides flat. If the turn doesn't seem tight enough (over a 500 foot circle) warp the rudder slightly left, though this was not needed in the model that was tested here.

To fellows who are accustomed to 38 and 40 inch wingspan models for Arden .099 engines, the 31 inch Natsneez may seem a bit small. However, during tests at Hicksville, L.I., the ships tested showed no power spiral tendencies whatsoever, proving that the lift from the thick wing is a factor in aiding the stability of gas models, particularly under full power." 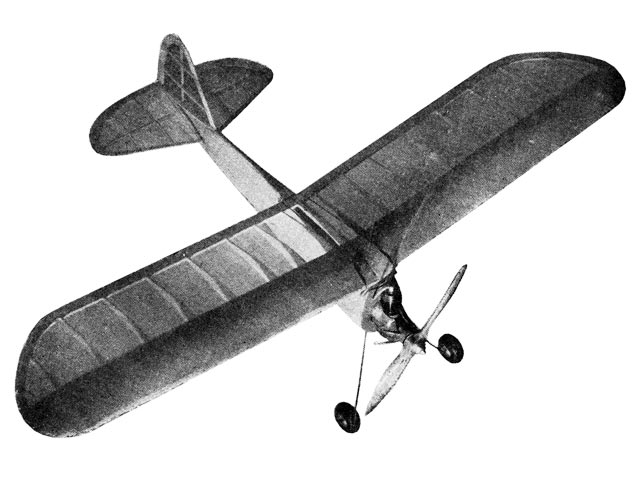 Has no-one noticed that this plan is not the same as the one published in Aeromodeller. The wing spar arrangement is very different and PE's original had wing LE slots.
The fuselage construction has also been changed. The American publishers appear to have been a bit naughty in not mentioning that they had "redesigned" the construction...
Brian Cox - 21/06/2020
Yes, we noticed that, thanks Brian. That's why the two plans are listed separately, and that's why we refer users from this page, with a link, to the earlier Aeromodeller plan at Natsneez (oz2251).
SteveWMD - 21/06/2020
Add a comment