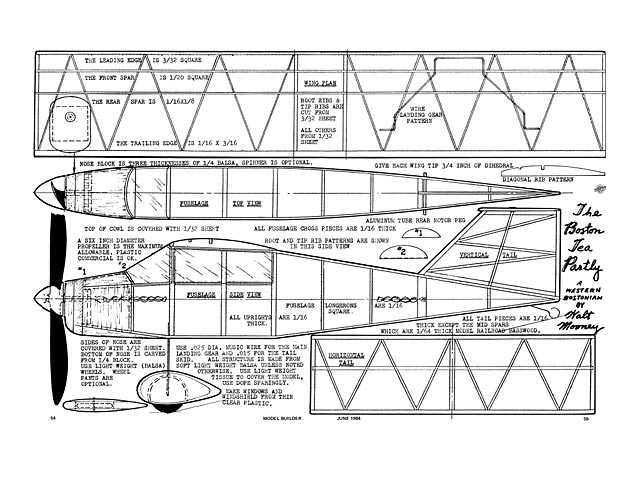 Quote: "The Boston Tea Partly is a relatively simple Bostonian that is designed with wing and tail structure that tends to resist warping by means of the diagonal ribs in the flying surfaces. It flies quite well, indoors and out. One consequence of this is the fact that there are no pictures of the author's complete model available. The author's model, the one that is shown as a skeleton, flew out of sight during an official flight in the San Diego Orbiteers versus Scale Staffel Bostonian Challenge on February 19, 1984, before he got around to having the finished model photographed.

The finished model with the red, white, and blue color scheme was constructed by Pete Glor. Although Pete's model turned out a little heavier than necessary, 38 grams with its rubber motor versus the 14 gram minimum allowed without motor, it also flies very well. It has recorded a 38-second official flight indoors under a less than twenty-five foot ceiling at a Scale Staffel flying session. Pete built his model for our traditional Fourth of July Bostonian meet, hence the color scheme and the license numbers on the model.

Another successful flying Tea Partly was made by Lenn Riddle who made a tricycle landing gear version by mount-ing the main gear one upright further aft, and adding a nose landing gear one bay forward of the main gear position shown on the plan. This model also flies very well and makes particularly smooth takeoffs and landings.

Keep your model as light as possible by using lightweight balsa, lightweight tissue, the thinnest plastic for windows, balsa wheels, and going easy on the dope.

The only thing much different about the structure of the Tea Partly than that of the ordinary Bostonian is the use of diagonal rib structure in the flying surfaces. These result in an amazingly stiffer structure. As a consequence, it's important to build the tail surfaces on a flat building board to prevent built-in warps. I like about an eighth of an inch of washout in each wing so the tip of the trailing edge of the wing should be blocked up this amount above the building board while constructing the wing.

The tail mid spars are added on both sides of the basic flat tail structure after it is removed from the board.

The wing dihedral starts on each side of the flat center section which is just as wide as the fuselage.

The fuselage is a conventional box made by building both sides directly over the plan. The sides are removed from the plan and carefully separated from one another using a thin blade. Cement them together at the aft end, and then add the cross pieces for the top and bottom of the fuselage, working forward bay by bay to the front end. The top and sides of the most forward fuselage bay are covered with 1/32 sheet balsa after adding formers 1 and 2 to the forward two cross pieces. The bottom of the forward two bays is covered with a solid balsa part carved from quarter-inch balsa sheet.

The nose block is made up from three pieces of quarter-inch sheet balsa. The forward two are carved after assembly to a shape simulating the forward end of an inline engine cowl. The aft piece is made to be a snug fit into the front end of the fuselage box. Drill a hole through the noseblock to accept one of the Peck-Polymers small nylon thrust buttons. Install your selected propeller, and add a carved spinner if desired.

Bend the landing gear wire to the shape shown, and securely cement it in place in the fuselage. Use lightweight balsa wheels and install wheel pants if desired. If your wheels are an eighth of an inch thick, the wheel pants can be made up using two pieces of 1/16 sheet balsa for the sides and a piece of 3/16 balsa for the center of each pant. Carve them to the shape shown in the top and side view, and carefully round off all the corners for a smoothly streamlined shape.

Fill in the bottom of the last fuselage bay with 1/32 sheet to support the thin wire tail skid. A short piece of 1/16 diameter aluminum tubing is used for the rear motor peg.

Cover the model using lightweight tissue. Use any color scheme you desire. Outdoors, a brightly colored model is easier to find.

The model should balance with the centerline level when supported half-way between the spars. Have fun at your Tea Partly." 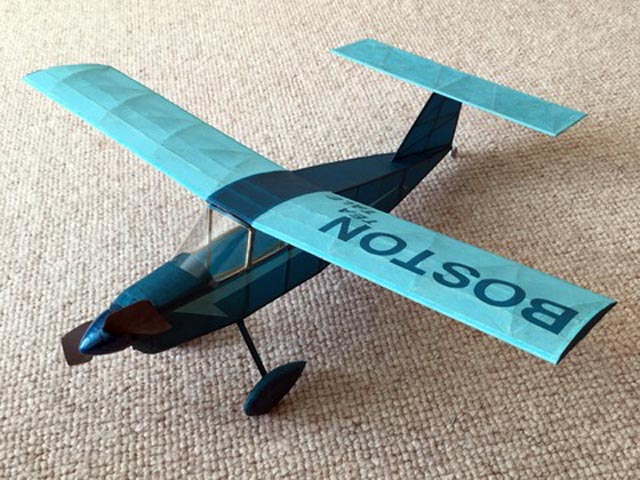