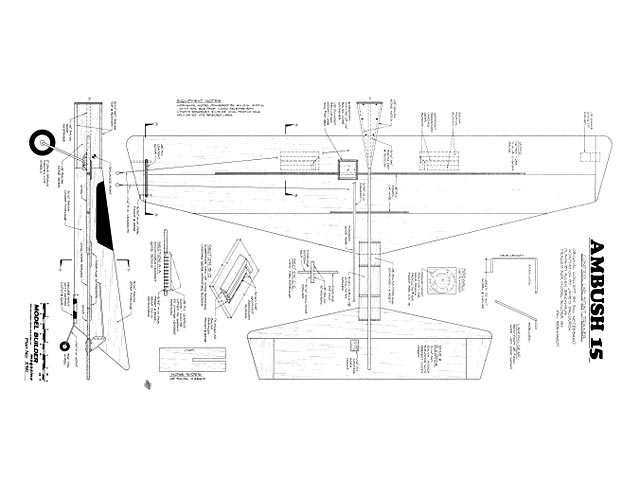 The original Bill Netzeband Ambush (oz11866) design was for .049 engines, and kitted by Testors. This here is a later enlarged version, for .15 engines.

My interest in the Ambush 15 came in a talk with my friend Jim Pacourek. He, like many other beginners in CL stunt, was having a learning curve problem. Building a fully ribbed stunt trainer was time consuming, and a lack of good weather prompted few flying sessions. Crashes were more the norm than the exception. Pacourek's master guru, Jim Renkar, suggested putting together a small 1/2A design called the Ambush, a fully-sheeted stunter developed by Bill Netzeband for the Testor 8000 engine.

In Mr Netzeband's words: My first sketch and data sheet is dated 5/10/77. The concept was to create a 1/2A machine that was fully aerobatic, using the reed valve 1/2A engine power level. The structure was laid out to be bulletproof, and it was designed to bounce when accidentally landed in the grass. Since it was to be a rank beginner's project, I elected to hold material costs to a minimum. Thus, the parts all came out of two sheets of 1/8 x 3 x 36 balsa. The assembly was designed to be pinned flat on a work surface to align the critical surfaces. The controls were all commercially available, at the time.

The CG location has been verified by calculation and experiment. I had zeroed in on the ideal stability coefficients, and had the math to adjust the controls to handle the excessive pitching moment created by a flat plate wing at angles of attack. The weights were fairly easy to accomplish (no Concours finishes allowed). The layout also permitted a dedicated individual to mass pro-duce parts for a group of kids. Bill Tucker did this for 10 kids in his club, and they produced 100 percent flyable planes! The finished planes met every design criteria, and were able to do respectable squares on 35-foot cloth or wire lines. On 42-foot, .008-inch diameter cables, they flew up a storm.

Once the plane and plans were firmed up, Testor offered the plans at cost, to promote the 8000 engine. I believe we sent out more than 300 plans.

The JP/JR consortium decided to scale up the Ambush for an OS Max .15 FP-S. The final wingspan of 37 inches was determined. This gave them a multiplier of 154 percent for the rest of the model. Construction was still all sheet balsa. Two spars of 1/8-inch plywood were inserted to mini-mize dihedral flexing during maneuvers. With this span and the thin (1/4-inch) flat airfoil, some dihedral effect will be seen during attitude changes. This cannot be removed without severe weight penalties.

CONSTRUCTION: The Ambush's construction is of the utmost simplicity. Few words are needed to describe the actual procedure, although the upper and lower fuselage vertical pieces deem some attention. On a flat board, glue together the three wing sections and the two spars. Add the 1/4-inch balsa nose block stiffener to the leading edge. Once dry, turn the completed section upside down. Add the 3/16 x 1-5/8 x 4-1/8 balsa fuselage section and the stab part to the rear of the wing. Now glue the 3/16-inch balsa fuselage bottom to the lower side of the wing. When cured, the fuselage top can be glued to the upper portion of the wing. Add the 1/8 x 5/8 x 2 balsa fuselage stiffeners and you are ready to build the nose section.

Using an aliphatic resin type glue, glue the two 1/8-inch balsa nose pieces to the nose area. Add the nose top and bottom balsa pieces. Align and pin these parts together and allow to dry. Drill the firewal (F1) for your motor mount and install 4-40 blind mounting nuts to the backside, Glue F1 to the fuselage nose section with slow-drying epoxy. Wrap a piece of 1-inch wide fiberglass cloth and epoxy around the nose. Half of the cloth folds over the firewall and the rest covers the circumference of the balsa nose sides, top and bottom. The rest of the construction is simply looking at the plans and adding the bellaank/horn mounts, wingtip weight, landing gear blocks and hinging the elevator to the stab.

The photo that shows Jim's motor/tank setup depicts a wedge-type metal tank inset in the outboard fuselage nose section. No tank location is shown on the plans. The tank you use might be a metal or plastic unit and a different size than Jim used. Cut a place in the outboard nose section to accommodate your particular fuel tank. Line the opening with 1/16 balsa and fuelproof it before final painting. If you decide to side-mount the engine, be sure to have some vertical adjustment space in the tank compartment.

The leadout guide is similar to that on the original 1/2A Ambush. I must compliment Mr Netzeband for the cleverness of design of this simple item. The front piece of 3/32 wire is a pivot point for the leadout guide..." 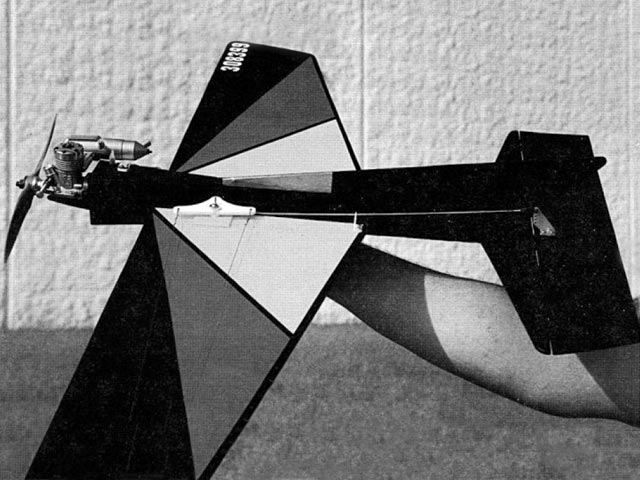