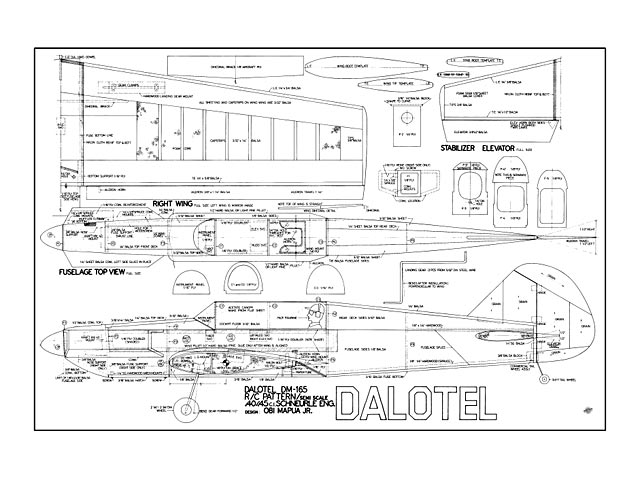 Quote: "A neat scale aircraft with pattern potential on as little as .40 power.

INTRODUCTION: Were it not for the success of Hanno Prettner at the Las Vegas Tournament of Champions, the Dalotel DM-165 would have probably remained an obscure aircraft. Built in France by Societe Paulet during the late 1960s (the real Dalotel, that is), the DM-165 was meant to be a two-seat aerobatic aircraft. Its designer, Michel Dalotel, saw fit to name the DM-165 the 'Viking.' So many aircraft, both models and full-size, however, carry that name that I thought I would name my model 'Dalotel' - it has a nice ring to it!

Presented here for construction is a 1/6 semi-scale reduction of the real DM-165. The model's wingspan is 54.5 in and the wing area is 568.84 sq in. The prototype, weighing 4.5 lb, revealed a wing loading of 18.22 oz/sq ft, making it light enough for good aerobatics. Construction is quite conventional with a balsa/ply fuselage, and foam-cored wing and stab. The engine to be used must be a good .40 to .50 Schnuerle. The engine I found to be optimum was a .45 with a plain muffler; tuned pipes were tried and discarded, as there seemed to be no advantage gained with them.

The Dalotel DM-165 described here was designed for pattern and not for scale. It was also conceived for continuous-sequence aerobatics in the IMAC and Vegas"patterns, but, at a size convenient for practice and sport fliers as well. With a 40 up front, the plane's size is not so big that you need a van for transport; also, the construction of a .40-sized Dalotel is easier on the pocketbook.

The Dalotel's design evolved from meetings held with other R/C fliers who were also analyzing the trends that R/C pattern could take in the future. It was evident that the Tournament of Champions would be a deciding factor in influencing R/C pattern. Primarily, the TOC attracts the world's top pattern fliers, and awards the winner with the biggest purse in R/C pattern contests. Continuous-sequence maneuvers would also gain popularity, we thought, because they would look more 'alive' to a crowd. Contest pattern ships that go through the sky like bullets, mak-ing unidentifiable squiggles in the sky were not our idea of aerobatic pattern. Ever see this type of contest? It's boring and devoid of spectators.

With takeoffs and landings no longer being given points, conventionally-geared (tail-dragging) aircraft could emerge into pattern flying, as this type of setup is easier to install and maintain. Also, a good tail-dragger setup has only slightly more drag than a retracting-gear ship - and weighs less and has less problems in the bargain! Perhaps with the emphasis on scale at the TOC, we thought, 'real' planes would appear in regular pattern contests, instead of the unrecognizable precision instruments developed for winning a set of rules.

Thus, the Dalotel emerged. It was a close contest with a Zlin 526 AFS, which lost only because the Dalotel's canopy was much easier to build. (The Zlin had a bubble canopy.) No need to build a vacuum-forming machine; just bend and Hot-Stuff flat sheets of acetate around the bulkheads and, presto, you have a canopy.

Yes, the DM-165 had to be simple and economical to build. All too often a design has to be considered 'pure' and no compromise is spared to building ease and economy. Some of the more popular 'flying bullets' are like that. But, as pattern ships will eventually wear out, or be ruined in some maneuver attempt too close to the ground, they may have to be replaced rather quickly. So, a good design has to meet this requirement also. To sum up, a good pattern ship not only has to fly very well, but has to be economical and easy to build.

PERFORMANCE: Usually, the flight characteristics of aircraft featured in construction articles are at the end of said articles. This time, I would like to write about the Dalotel's performance in the begin-ning, as this is a plane for flying, rather than building, pleasure. The prototype Dalotel was entered in a contest sponsored by the Philippine Air Force on December 20, 1981. The pattern used for aerobatics was IMAC Sportsman. This was to be my first ever R/C pattern contest - such contests are very few and far between here. We (the Dalotel and I) placed fourth with 661.7 points out of a possible 1000. This was due to a faulty Immelmann that emerged right into the morning sun. First placer Iko Manalo flew a Curare and led with 781.7. Iko is a veteran of quite a few contests, including having participated in R/C pattern events in Japan. Those scores show how close the fighting was.

Third placer was Louis Hernandez, my R/C flight instructor during my early days in R/C. He had helped me trim the Dalotel to a contest performance level, and, after having flown it said - Hey! I want one, no, change that! I want two of these!

The top pattern fliers of the Philippines have flown the Dalotel (now nicknamed the 'Dalo') and they all commented on how similar the handling was to an FAI-type pattern ship, but that it was slower. In fact, they liked it because it was slower! It allowed them to correct maneuvers during practice sessions. It's easy to trim and easy to practice with. Presently, 11 Dalos are in various stages of assembly here in Manila, of which 3, including the pro-totype, are consistently being flown each weekend.

How does she fly? Let's start with the takeoff, as this is what too many R/C pilots fear about tail draggers. With the Dalotel, this fear is unfounded. First of all, the gear must track straight and true. The main wheels must be perpendicular to the ground or have a little camber to them. They must also point straight or have slight toe-in. The tail wheel must have almost no play and should be steerable with the rudder. With this accomplished, check control movements. They should be as per plan. Do they move the right way (left aileron on transmitter equals left aileron on the plane, etc.? Okay now, start up. The prototype's engine, an MVVS .40 Schnuerle - equivalent to a Speed Webra .40 - gives out 14,500 rpm on 4:1, no-nitro FAI fuel and a 10 x 5 prop. This provided sufficient thrust to take it through the maneuvers.

For takeoff, slowly give a little throttle up from idle to get her rolling straight. When the engine starts picking up, shove the throttle forward and keep the Dalo tracking straight with slight bits of right rudder. Careful now! Her rudder is really huge, so too much may cause her to swerve to the right. Takeoff is quick and clean. Only a slight touch of up elevator is necessary once the Dalo reaches takeoff speed - about two seconds after the tail lifts up.

Trim out for straight and level flight, and trim out for inverted. If necessary, land and readjust horns, links, etc. Now try loops - big, slow, and round. Rolls are crisp and axial. Stall turns are a joy to behold. She will stall turn almost every time you try it. Snap rolls are heart-stopping. The best snap rolls are power-on; these are instantaneous and violent. Some practice with snap rolls is needed 'cause if you don't let go quick enough, she'll do more than one! And you better have glued all your bulkheads well.

Spins are best accomplished with rudder and elevator only. These are also tight and violent, and, please don't make them too close to the ground. Oh, she'll recover each time, but there's always the danger of being over-confident. Remember, all pattern ships need some height to pull out after a spin; this is needed to get back to flying speed.

Knife-edge? Yes! But if you want such a thing as a knife-edge loop, put in a .50 O.S. FSR. Other maneuvers are combinations of the ones described above and are performed crisply and cleanly - so well that you're not going to believe that it's only a 40 spinning the prop up front. Is that a 60? is a comment I hear sometimes. I'm not going to describe each maneuver here as it would take too long..." 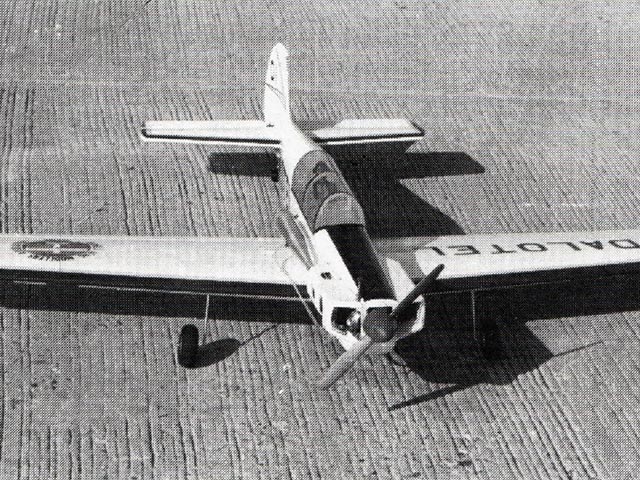