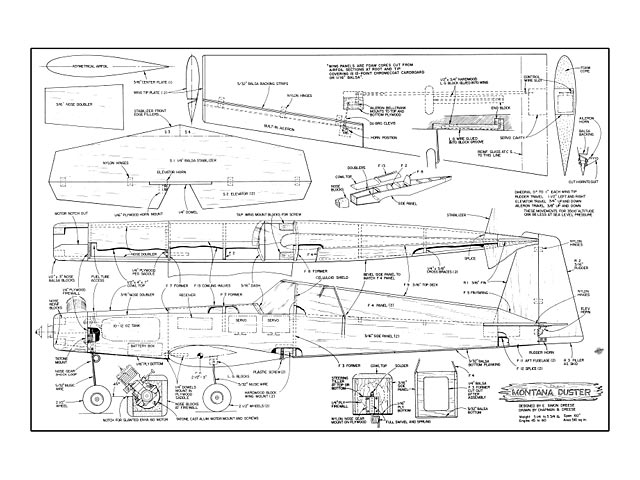 AFTER flying the Kwik Fli II (oz7483) and a Chipmunk (oz414), I was amazed at the flying abilities of the lighter weight Chipmunk at 5 lb, as compared to the Kwik-Fli's at 6 lb 8 oz. Considering their weights and aerodynamic differences, I set about to design a new airplane. With the arrival of the new pattern for 1968, and being a Montana farmer, I felt that a plane designed around the Colair Agiwagon and the Piper Pawnee would make a good machine.

My second thought was that the new plane could be made using the most popular sizes of wood, and to get the most out of the wood for the money. A good, low-cost exceptional machine would draw public acceptance. The Duster is designed for quick, cheap building. It is capable of the Class C pattern without pilot strain. My aircraft has these features: 58 to 60 in foam wing covered with cardboard, with built-in ailerons and wide-tread landing gear and no dihedral except that provided by the bottom of the thickness-tapered core. The leading edge can be straight, or swept back 1-1/4 in. The fuselage resembles the profiles of the Agi-wagon and Pawnee, as does the rudder shape. The stabilizer is reversible - for connected, conventional elevators or a Mooney-type swept-forward hinge-line ele-vator.

1) Cut out fuselage sides, doublers, and tail extensions. Sand to match, then glue nose doublers on with quick-setting epoxy. Glue tail extensions and doubler with Tite-bond. Put formers F2 and F3 on one side, being sure they are perpendicular to the side.

2) Cut stabilizer parts out and glue. Align elevator pieces and glue. Mark center of stab's trailing edge and draw a line 90 degrees to its center for aligning Rl. Sand These views show that appearance is combina-tion of several monoplane agricultural aircraft, aerodynamics from most past multi-stunt planes, yet simplified assembly. Note Mooney-type stab.
R1 lightly and glue to the stab, being sure it is vertical to the stab surface and square with the trailing edge.

4) Cut wing cores. Drill holes for wire. Notch out holes for bellcrank and landing gear slot on bottom of core.

6) Slide a soda straw over piano wire at center of core. Glue a piece of scrap 1/4 plywood on back of landing gear plates at mounting hole, then install gluing with quick-drying epoxy. Lay wing pieces aside to dry.

7) Put the two fuselage sides together, checking with triangles. Be careful, be-cause at this point you are starting align-ment of the craft and establishing the thrust-line.

9) Firewall now can be installed, if fuse-lage is wrapped with tape in the area of F3 and F2. Be sure to check its alignment before gluing. Mark center on top of fire-wall, F2 and F3. Use a piece of string twice the length of the sides and, starting with a pin in the center mark of the firewall and centering over the other two marks, pull in the rear of the fuselage and center by use of the string..." 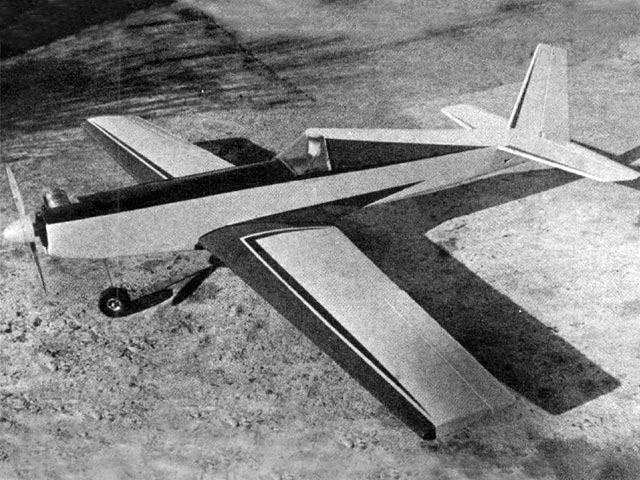