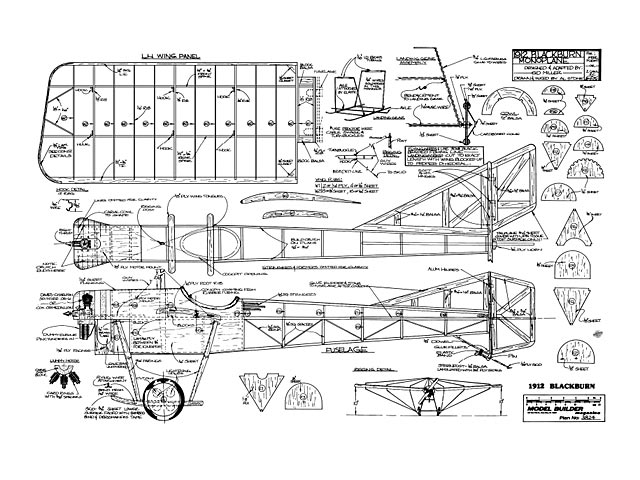 Quote: "This model was designed and flown as a free flight but, if you're an R/Cer who is willing to do a little modifying, the plans provide a nice basis for producing a lightweight 3-channel scale ship. 1912 Blackburn Monoplane, by Sid Miller.

Those aviation enthusiasts who were lucky enough to visit the last open day of the season at Old Warden Airfield (England), would have witnessed the rare sight of a genuine 1912 aeroplane in its natural element.

Piloted by Neil Williams, the Shuttleworth Trust's (Museum) Blackburn Monoplane gave a spirited performance despite its vintage years and there were few spectators left uninspired by the occasion.

Robert Blackburn, the designer, was born in 1885 and was a qualified civil engineer. He became interested in aviation at the time of Wilbur Wright's visit to France in 1908.

The construction of the airframe is fairly typical of the period. The fuselage is made from three ash longerons, with spruce spacers, the rear turtledeck is faired to a semi-circular section by 11 stringers. Thin aluminum sheet extends to the rear of the cockpit, and this has a dull finish. The wings have no ailerons but are 'warped', and contain two spindled ash spars, with built-up cottonwood ribs.

The tail assembly has single surface covering and both movable and fixed surfaces are attached to separate 1-inch diameter spars of steel tube. The undercarriage (landing-gear), clean for its period, is made of ash, streamlined between joints, with two spreader bars of steel tube.

The pilot has two basic instruments at his disposal, a large revolution counter (tachometer) mounted at the left, and a couple of oil pulsulator glasses. The flying controls consist of a fairly standard rudder bar and a long 'joystick' on which is mounted a 12-inch diameter 'steering wheel' This wheel warps the trailing edge of both wings by pulling on two cables which run from the fuselage sides down to pulleys attached to the rear legs of the undercarriage Each cable at this point divides into three, which run to the rear spars Corresponding cables from the top surface of the spars run up and over the ash kingpost and perform the duty of the balance cable on modern ailerons. At the time the Blackburn was built, ailerons were virtually unknown.

Standard lifting (flying) and landing wires brace the front spars. The real aircraft is covered in the normal off-white linen, which darkens with age.

The model, although primarily designed for free flight, is easily adaptable for radio control. The large wing area, deep undercamber, and adequate tail surfaces, should handle a larger motor (10 to 15 c.i.) and the extra weight of radio gear with ease. I would like to offer two suggestions along those lines: use of wire and tube wing mounting (as per RC sailplanes), and cables for servo to rudder and elevator hook ups.

CONSTRUCTION: WINGS: Use pattern on plan to make templates for ribs W-1 and W-2, Cut and sand ribs as per number on plan. Make a thick cardboard template of the wing tip shape. Soak strips of 1/32 x 1/8 balsa, bass or spruce, and laminate four thicknesses around template. Notch trailing edge to receive ribs. Pin leading and trailing edges over plan and glue ribs in place. Slide 1/4 x 1/8 spars (spruce recommended for RC) under ribs, carefully raise and glue in slots. Use scrap to block up spars, to allow for undercamber.

FUSELAGE: The basic crutch of 3/16 x 1/8 balsa is built directly over the plan top view and using the 'V' formers F-1, F-4, F-6, F-12, F-16, and 1/8 square spacers, add the bottom longeron. Remove the crutch from the board when dry and add upper formers, stringers, motor mount and cowling. Cut the cowling and mount to suit engine used. From experience, two degrees right thrust and three degrees down thrust is desirable. The kingpost is a vital part of the construction of this type of model, since the landing wires (top) and flying wires (bottom) actually support the wings. It is a laminate of 1/32 plywood (1/16 for RC), between two pieces of hard 1/8 balsa (spruce for RC) and securely glued in place. Note that it goes all the way to the bottom of the fuselage and is also glued to former F-5. Sheet forward part of fuselage as shown, later cut out cockpit opening and use split black rubber tubing to make cockpit coaming.

Add sternpost and skid. Fin can be glued on now or later after covering. If added later, be sure and remove paper along stringer where fin fits, for a good glue joint Separate rudder is later hinged to the fin.

TAIL ASSEMBLY: Build both halves flat on plans; for free flight, elevators can be left as individual sections, joined to stabilizer halves by aluminum hinges, and for RC, elevators should be joined by a dowel.

LANDING GEAR: Assemble as shown in full size on plan. Wrap with soft wire and solder all joints. Fair in with balsa and bamboo as indicated; spruce can be substituted and is desirable for R C. The wheels can be constructed as shown on the plan or Williams Bros 3-1/4 inch Vintage Type will do nicely. Assemble wheels on axle and secure axle in place with white, round, elastic thread, available in sewing section of local stores ... it is also used on tailskid ... and acts as a shock absorber. The landing gear is spread at the open ends to fit into the brass tubing mounts, and cross braces fit into the wire eyelets.

RIGGING: The wings should be fitted on the plywood tongues and then, with the tail blocked up to set the fuselage centerline parallel to the working surface, block up the wing to 10 inches from the leading edge of the tip rib to the working surface. Rig flying wires (lower) of 30 lb test black nylon fishing line, pulled tight, secured and trimmed. The landing wires (upper) are constructed of Proctor flying wire, swages and turnbuckles. The wires are fitted and then pulled taught using the turnbuckles. The turnbuckles are then secured with safety wires. This tension is important to provide a rigid and secure system, as the wing is supported by this series of flying and landing wires.

There are seven (7) lower braided lines on each wing panel: three from front of the landing hear lower surface to front spar wire attachment hooks, three from the rear landing gear attachment point to the rear spar. The seventh goes from the rear landing gear point to the front spar outermost hook. It is important that there be no upward give in the wings when the model is held at the center of each wing.

COVERING & FINISHING: I used white heavy duty silkspan on the fuselage, light weight white silkspan on the wings and tail. The stab and elevator are covered on the top surface only The whole model should be given at least two coats of clear dope. Thinned (50/50) dope should be used on the wings and tail, with care taken to avoid warps. The sheeted front should be painted dull silver, and the cowling interior flat black.

FLYING: Like any other model, the key to success is to make sure the model balances at the point indicated on the side view The original did not require any added ballast. If necessary, add clay to nose or tail to achieve position shown

ROG your model, using full power with about a 15-second run. If not airborne after a 30-ft run, gradually decrease downthrust.

It is desirable that the model fly left-left if possible, but go with what seems right for your particular model. If climb is too steep, increase downthrust. Glide can be fine trimmed with the elevator Use rudder sparingly and only as a last resort.

The model is extremely graceful in flight, moving at scale speed, and looking very realistic due to its good size. Good luck, fair skies, and gentle breezes." 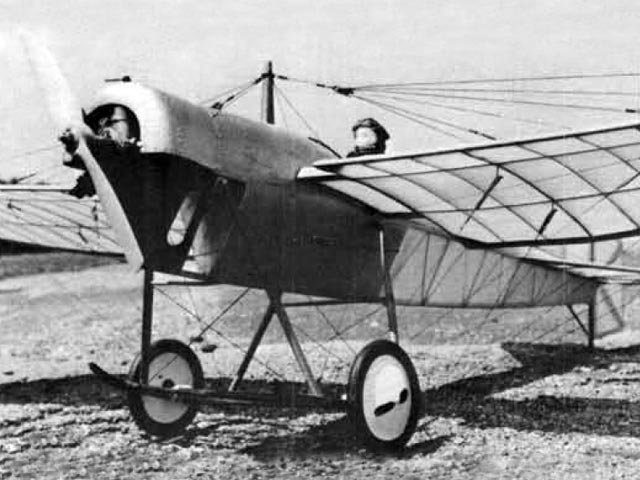 It is hard for me to see the difference from 1912 Blackburn Monoplane (oz4772)
KLH - 16/06/2020
Good point. I don't want to be unkind to Mr Miller, but it looks like he did just copy the earlier plan. All of it. Including very small details like the assembly sketches of the landing gear and the dummy engine construction. Almost every detail is exactly the same.
SteveWMD - 16/06/2020
A bare-faced ripoff of the Finucane plan, made worse by the elimination of the tail adjuster and other things. Handle a .15? I flew the bigger original on single channel with a Mills 75. To rely on the rigging for wing bracing is hopeless - the UC digs in, distorts and makes all the lengths wrong. Mount them on dowels. Capping the spars top and bottom with thin carbon stops the wings looking like that.
bill dennis - 16/06/2020
Mr Finucane had his design published in 1954, then Mr Miller got his out in 1982, 28 years later. Now in 2020, or 38 years later something fishy is detected. Either this fish preserves remarkably well or the Sicilian Vendetta tradition has a lot to learn.
Miguel - 17/06/2020
Add a comment