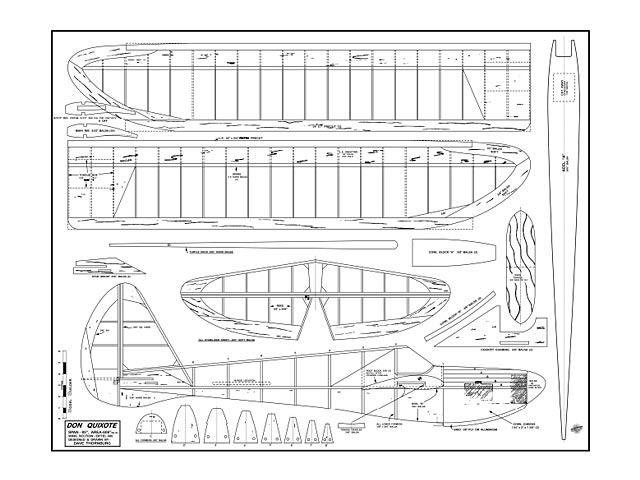 Quote: "Reminiscent of several famous designs of the past, this soarer combines the classic beauty on the outside with the convenience of modern technology on the inside. Text and photos by Dave Thornburg

Don Quixote is pure nostalgia. Not instant nostalgia, mind you - it takes more than a weekend to build, even with sheet balsa keels to take the headache out of fuselage alignment. But it will be worth the effort, because the completed airplane has that classic look of the forties. Old timers will assure you they've built dozens like it in their freeflight days; youngsters are certain they've seen it in so-and-so's collection of Air Trails or Flying Aces.

Actually, the Don's antiquity is only silk deep. Underneath its eight coats of thinned nitrate dope lie generous amounts of sheet balsa (a rare commmodity in the forties), a few modern conveniences such as Nyrods and precut trailing edges, and a newfangled digital radio to bring it home again. I could teven forgive you for covering yours with Monokote - provided of course that you use one of the transparent colors, to show off its beautiful framework.

Construction is easy, though time-consuming, so let's get cracking, as the British say. Decide on your radio system before beginning the fuselage, and make the appropriate cutouts in the main keep pieces for servos and battery pack. The current crop of two-channel 'bricks' will fit beautifully; just remember that they are not immune to shock damage, and need at least 1/4 inch of REAL foam padding all around. For sailplane work, I like to bury my antenna within the ship and just 'plug in' as I install the radio. A piece of very light music wire epoxied down the keel and culminating in a plug up by the receiver serves the purpose nicely. Be sure you leave enough pigtail on the receiver to add up to the factory-recommended antenna length, and you should have no problems. Fliers who cling to the superstition that antennae ought to be as nearly vertical as possible are horrified by this practice, but don't let them dissuade you. The last piece of equipment I had that really needed a vertical antenna was a Berkeley 'Super Aerotrol' rig. Ask your grandpa about that one, chile.

Be sure to drill the Nyrod holes when cutting out the formers, and don't foget to install the rod casings before you cover the fuselage. The blocks for the nose section are all standard sizes..." 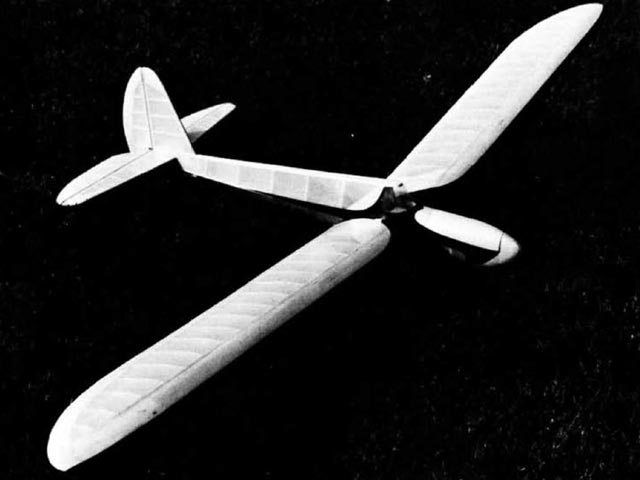 Does anybody know the dihedral value of this glider?
Stanhauser - 17/06/2020
The 'tongue cradle' part shown on the plan, when drawn out at full size, gives me 2.9 inches under each wingtip [see pic 006]. But the plan is low res and quite hard to read, so you may want to try drawing it out for yourself.
SteveWMD - 17/06/2020
Add a comment