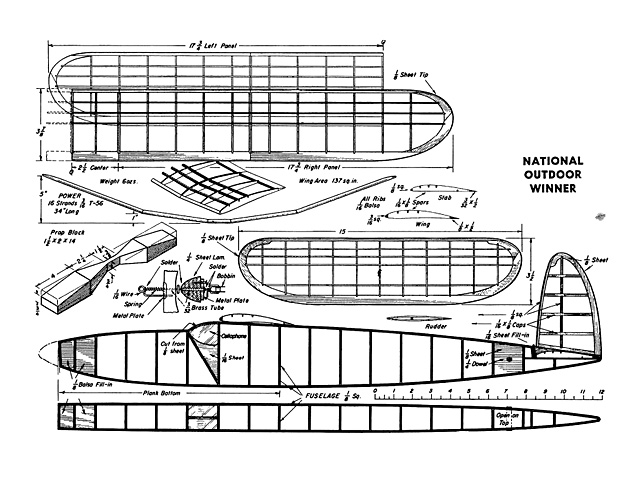 The Model (Brawner talking): I have held several National records with this model and won a lot of contests with it. I won first place at the 1949 All Western Open and set an American record. At the 1951 Nationals I won first place, and previous to this meet set a new record at the Arizona PlyPnouth Eliminations. There's no point in listing all the other contests in which this model has come out on top. Take my word, it's surprised even me.

First build the body by constructing the two sides one on top of the other, then putting them together as shown. Fill in sections with 1/8 balsa and plank bottom. Cover body with red Jap tissue (double) and put on four coats of thin dope. For wing, just cut ribs all the same size and lay down leading and trailing edge and insert the ribs, after which put in the spars and tips. Build one wing, and when that is dry build other wing on same plan.

Build the stab in the same manner as wing. Rudder, wing, and stab are all covered with Jap tissue and doped with four coats of very thin dope. The prop is the most important part of the airplane; you should take lots of time in carving it; cover with tissue and dope well. I use 16 strands of 3/16 in T-56 rubber 34 in long and get good results. This model should climb to the right and glide to the right. If properly built and adjusted you will have a winner. " 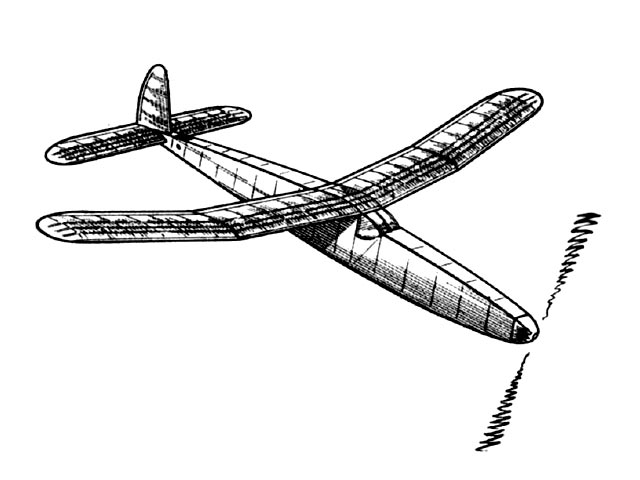