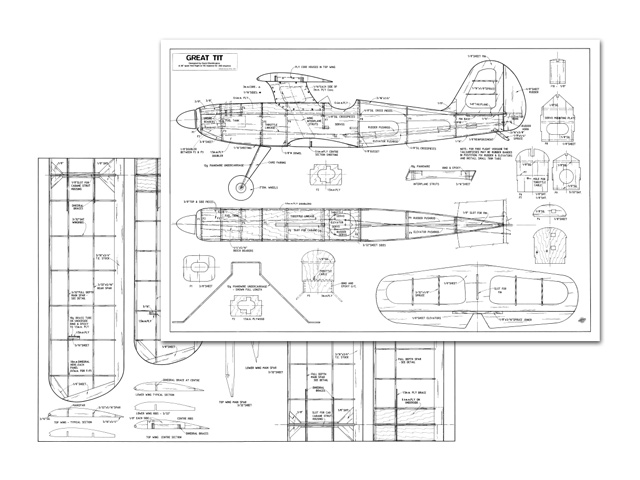 The original Frog Tomtit (oz580) was a free flight model at 18 in span. This is a later enlarged version by David Boddington.

Quote: "DAVID BODDINGTON doubles up the Frog free-flighter for .049 power to be flown with or without radio control. Bill Cunningham built, and enjoyed flying, the 36 in span biplane.

In those lazy, hazy days of the mid-1950s, Frog produced a Senior Series of rubber powered models of 18ins. wing span. Most, such as the Raven (oz4177), Linnet (oz1128), Heron (oz782) and Redwing (oz1531) were monoplanes, but the Tomtit (oz580) was a biplane. Now it was probably that I was already a confirmed two-wing addict, by this stage, that I opted for the Tom-Tit, or perhaps that I thought I was getting better value for money! The little Frog biplane (not so little in those days) flew quite well as I recall, although a little trickier to trim than some of the other duration designs. Another delightful Frog biplane to fly was the '100' powered Firefly (oz3397), with monocoque balsawood/paper/resin pre-formed fuselage halves. International Model Aircraft (FROG) were often well ahead in technical innovations.

My development of the Tom-Tit to the twice sized 'Great-Tit' is both intended as a tribute to a company and its designers for giving me so much pleasure as a youngster and as a way of creating some of the memories of those happy and carefree days. At least, at this distance they seemed to be all fun, frolics and Frogs.

Although presented here as an R/C design I have no doubt that the 'Great-Tit' would perform equally well as a free-fighter. Perhaps, even further into my senility, I will build it in the free flight form and really get back to my childhood. I know that we do still occasionally get those totally calm, warm summer's evenings because we recently did some decompressed diesel free flighting. Not only that, but I also recently found a field with the long grass over which, according to the flying instructions, you must always carry out your test glides.

A LITTLE PLEASANT BUILDING: Working on the basis that the lower wing is the most vulnerable, this is attached to the fuselage with rubber bands - it also provides access to the radio equipment. The top wing is permanently fixed to the centre section pylon, glued after covering and the wings are joined by interplane struts permanently hinged to the top wing and plugging into tubing on the lower wing.

Before sticking bits together, work out where your radio equipment is to be fitted. Standard sized receiver, battery and servos will fit but the lighter weight of mini systems will improve flying characteristics. Cut a hole in former F6 large enough to locate the battery between formers F5 and F6. Check the engine bearer spacings for the engine you are to use, and adjust if necessary.

Now, over to Bill Cunningham for an overview of building and flying the 'Great-Tit'.

This all started with a phone call to DB: Do you have any photo's of a clipped wing Taylorcraft? Answer, No. Do you have any scale drawings? Answer, No. Try a bit of flattery: Enjoyed your magazine article about Frog. The reply went like this: Would you like a copy of a twice size FROG Tom-Tit'? Would a Scotsman say no? If you would like to build Great-Tit you will have a very good flyer, that can be transported in most cars fully built up, and it does not cost the earth to build.

BEFORE YOU START: Use light, firm wood. A model this size needs to be light. When marking out parts, please note that the fuselage side top line is not straight. Behind F7 it angles down to give positive incidence on the tailplane. Formers F3 - F7, ensure the curve is the same on them all, it makes covering with ply easier.

BUILDING: I prefer to start with the tail, it does not take long, and you have something finished soon. The spruce strips add a lot of strength to the fm and tailplane. Laminate two lengths of spruce to form the elevator joiner. I used very thin mylar for hinging, use cyano to harden wood at the horn position.

WINGS: Wings are simple to build. The main things to watch are, joining panels, strut fittings, and centre rib on top wing.

Accurate cutting of slots in ribs, spars and trailing edges means all four panels can be built very quickly.

When joining panels do not glue the centre rib on the top wing. This is made from three layers of hard 1/8in. balsa and the slot in the middle layer must be a tight fit on the ply core of the pylon. With both tips propped up 30mm at the outer rib glue the centre rib in place ensuring it is at 90° to the work bench. This is very important as it ensures wing and fuselage are correctly aligned. Add all gussets to the top wing, ply to the centre of bottom wing. Strut fittings are now glued in place, bottom of top wing, top of bottom wing.

FUSELAGE: If all parts are cut accurately the fuselage almost clips together. Adjust bearers to fit the engine used, do not remove any downthrust, a PAW 80 was used on the original. I made my own tank from tin-plate and copper tube although a commercial item could be used.

Now is the time to mount servos, I fitted micro's, but the plan shows standard size. Make pushrods, ensuring they clear each other at the cross-over. Install tank, boxing in with scrap sheet, do it properly as this is your only chance. Cut a hole in F5 for your battery pack, I used a 250mAh flat pack.

Make the pylon from 3mm ply skinned with 1/16in. balsa. Round front and rear edges. Glue in place, making sure it is vertical. Skin top with .4mm ply, use a card template to get the correct size, fit bottom sheet at front and inserts at tail. Make cowl using 3/8in. balsa, carve to fit the engine used.

FINISHING: Sand everything smooth and cover using your favourite method, I used Litespan on everything. Now make the wing struts, making them longer than required and sand to fit, they should be the same length. Bind and glue wire to struts.

Now get a bit of snake inner tube and glue into a slot cut the in pylon. Fit a servo screw through the centre rib so that it fits into the tube, this is enough to stop the wing from moving on the pylon. CG on my model is midway between front and rear spars in top wing. No ballast was required on the original and the weight, ready to fly, is 23 oz. Control movements are rudder 3/4 in both ways, elevators 3/8 in up and down.

FLYING `Great-Tit' flies very well. It has a nose down trim in the air, all flights were from hand launches. The PAW 80 Classic has more than enough power and loops and wing overs are as much as I have done. At half throttle low level passes are very nice to watch.

POSTSCRIPT: Where are the flying photo's? After showing the model to DB at Woodvale I packed it into the car boot. On the way home I had to brake very hard and heard a horrible crunching noise. Exit one 'Great-Tit'. It will be rebuilt with steroids! 72 in span, 60 four-stroke. How about it Mr Boddington?" 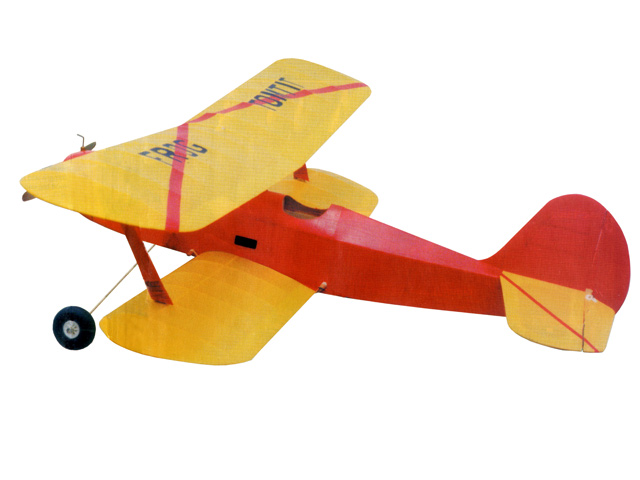