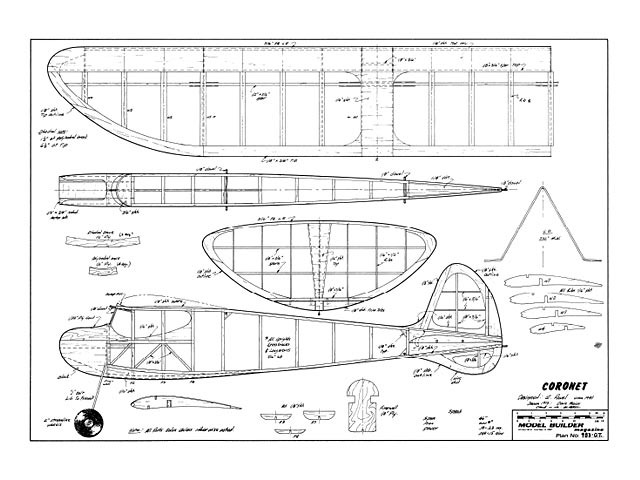 In the June 1941 issue of Model Airplane News, Scientific Model Airplane Company introduced the Coronet as 'A NEW Gas Model Airplane for Class A or B!' A lightweight cabin style model with a 46-1/2 inch wingspan (300 sq in area), the Coronet was claimed to have a climb rate of 2500 feet per minute and consistent soaring charac-teristics. Price of the kit was $1.95, which included a formed landing gear and bracket, finished landing gear clamp, and finished propeller.

Except for nationally known designs, kit manufacturers seldom give credit to the designers of most of their kit models. So it was with the Coronet. However,we may have an identity. Back around 1975, a fellow by the name of Chuck Gill produced kits for the Taibi Powerhouse and the Coronet (oz850). We still have a sample of the Coronet kit, and our OT plans were made from the plans in the kit. The title block on these plans indicated that an E Powell was the original designer. If anyone can enlarge on that information, we'd be happy to pass it on.

The OT R/C rule for engine size (.10 cu in per 225 sq in wing area) dictates a .13 cu in max displacement, which puts the Coronet in the stock .10 category. We personally don't favor scaling OT's up or down to match maximum engine sizes, so would power the ship with an R/C .10 such as an OS or Enya.

The Coronet is a nice, compact OT that will fit in any automobile." 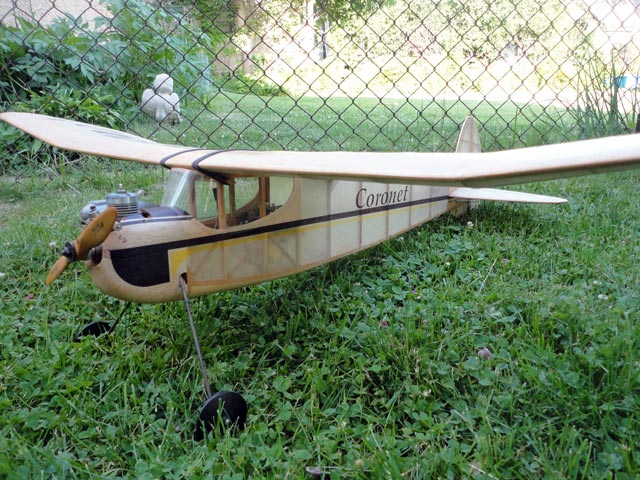 Many fuselages of these OT cabin ships tend to look like close relatives or perhaps the fuselage shape was an optimum for minimal materials while preserving the cabin look, but I'm available to be convinced otherwise. Whatever the case I find this wing to be a very pleasant and elegant design, with the polihedral and sweeping curve of the outer section TE, so I'll forgive the fuselage after all :-)
Miguel - 12/06/2020
Here are some pix for the recently posted Coronet [main pic, 003-005]. I wish I could take credit for building this one, but it was a beautiful model I snagged at a swap meet a few years back. Sadly the tissue is so brittle that every time I touch it I do more damage. Someday it will get recovered. Dave
dfritzke - 15/06/2020
Add a comment