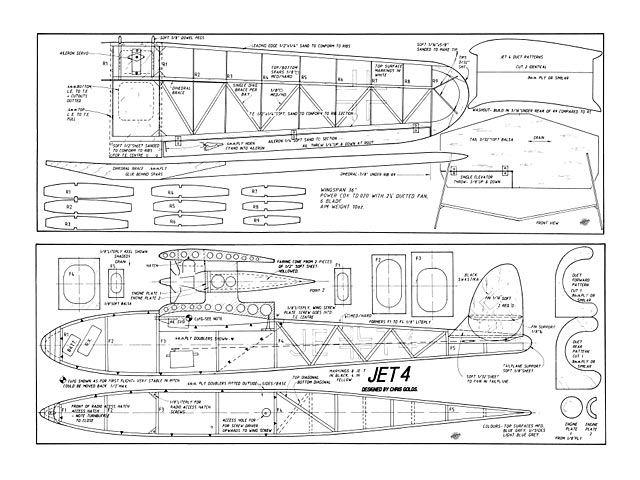 The birth of 'Jet 4' came about because of my desire to fly single Cox TD .020 (of which I have got quite a lot!) with my own design of ducted fan. with sufficient performance to allow some aerobatics. Furthermore, the design had to be simple and quick to build and use ordinary materials to produce a light airframe strong enough to withstand grass field flying.

I first tried to fly single Cox TD .020/DF in 1991 and produced a `sort of Heinkel He 162, with the duct on top of the fuselage. At launch the model weighed 14 ounces, with a wing loading of 15 ounces per square foot and was just capable of flying around at shoulder height in calm conditions -in other words it was a failure! From there I progressed to the twin Cox Javelin (RM May1992) and so on through the four Cox Victor to the eight Cox B52 and YB49. But I still had not achieved my aim of flying single Cox ducted fan.

Recently, whilst waiting for dry weather to enable me to repaint the outside of our home, I picked up a pencil and got trapped into doodling yet another try at single Cox DF. I based the shape on our very successful Henschel Hs 132 which flew throughout 1994 powered by David James' splendid Cobra gas turbine engine. I decided that the wing loading had to come down to - at most - a half of that of the first Cox model but that it should weigh less overall. In fact 'Jet 4' weighs just 10.5 ounces (including fuel!) and has a wing loading of 7.5 ounces per square foot and it flies with sufficient performance to be looped and rolled!

So let's get building: Start by protecting the plan with either candle wax rubbed in or cover it with cling film. Build the two fuselage sides in 1/8 square balsa directly over the plan using cyano as the adhesive. Separate the two halves and assemble them with bulkheads F3 and F4. ensuring that all is square. Add the other cross member and bulkheads fore and aft, ending up at the tail end. Add the .4mm ply doublers and the fuselage bottom. Next. add the built-up nose block. sensibly hollowed out. Sand the block to conform with the fuselage curvature and there is your fuselage!

Cut and sand smooth the tailplane blanks from soft 3/32 sheet and the twin fins from soft 1/16 sheet. Cut off the elevator (left hand tailplane only) and sand round its leading edge. Fit the tailplane at the dihedral angle shown and add the very light fairing to continue the fuselage top line to the rear end. Fit the fins as shown. The fuselage can now be papered (using lightweight tissue and tissue paste) leaving the bottom open at this stage. Water shrink the tissue then three coats of 50/50 clear dope and thinners will give you a smooth. tight. wrinkle-free finish.

Now for the wings: Now the most important part of any flying machine - the wings. Mark and cut the ribs and tips in soft 1/16 sheet. Assemble the tips. Lay on the wing half plan the 1/8 square bottom spar and add the ribs. Pack up (as shown) the leading and trailing edges then cyano all together. Add the top spar and the tips (packed up) and cyano all. Repeat for the other half wing. Cut the dihedral brace from .4mm ply and, using a razor saw, cut down through ribs R1 & R2 in front of the spar and slide the dihedral brace in place. Set up the wing halves with the dihedral blocks in place. check that all is square and correct, then cyano the halves to the brace.

Next add the centre leading and trailing edges as per plan and triangle brace the whole of the centre section. Cover the centre section top and bottom with .4mm ply, the bottom 'hollowed' as per plan. Fit the two 1/8 dowels by drilling through the top ply as shown. Offer up the wing to the fuselage and mark bulkhead F3 to drill the dowel holes. Tissue cover the wing and shrink and dope as for fuselage.

The duct and engine mounting: Cut the engine mount keel and discs and the engine fairings as shown step-by-step on the plan. Assemble them ensuring that the discs are square to the keel, then sand until the fairing is shaped as shown. Next, wire-cut the duct halves from blue foam and lightly sand the inside. Assemble as per plan duct halves to keel, engine plates and fairing. Sand lips and rest of duct (see photos) and seal with PVA paste. Sand again and repeat. NB: it is essential to have the inside of the duct as smooth as possible to reduce skin friction.

Make hatch as per plan, aiming for as airtight a fit as possible when closed. Paint and proof as per plan. By now you should have the entire airframe covered and doped (except rear bottom of fuselage) and the duct finished and painted. Now PVA the entire duct to the top .4mm ply of the wing centre section, ensuring the centre-line of the duct is parallel to plan fuselage centre-line..." 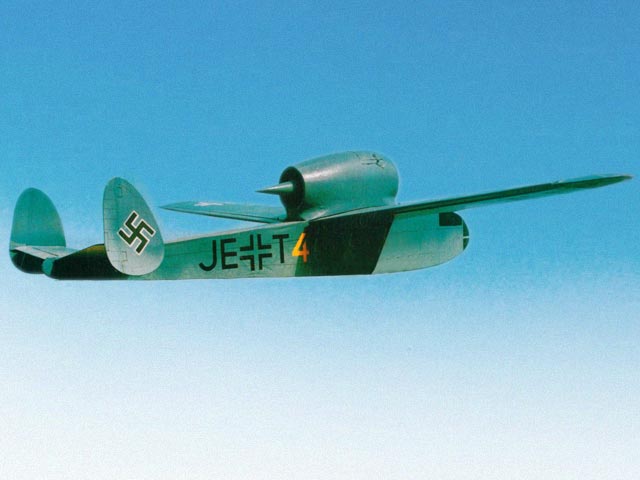 Chris Golds, a name I always rush to click on :-) Sensible and well engineered designs, a pleasant text deserving attentive reading, and being an artist his finishes go way above average, his scale designs are a lesson each. Always something new to learn in each plan of his.
Miguel - 11/06/2020
Well Mike, what would you expect from a former R.A.F. Sqdr Ldr?? C.G. plans are also usually off the beaten track, which really is the icing on the cake.
When well thought-out plans, that deserve to be thoroughly studied, are mentioned, the name of Gordon Whitehead (another former R.A.F. officer) does come to mind too.
Just pulling Mike's leg here. I could not agree with him more.
Arn - 12/06/2020
Leg pulling gladly acknowledged. By the tone of your message I can assume you never had anything to do with the RAF, in fact you had never heard the name before yourself =)
Miguel - 12/06/2020
I can't let the name of Flt/Lt Gordon Whitehead go without mention, a thoroughly nice 'chap' who I had the pleasure of meeting at Brize Norton. I thought he was slightly off the rails when he asked me to watch his peanuts fly in a small hanger by Ground Equipment, but when I saw these little gems fly, I was hooked for life.
John Boy Paddy - 13/06/2020
Dear JBP, I fully understand what you mean when you say peanuts and that you were hooked for life! I have a feeling you wrote it with a small case ‘p’ on purpose ??. Also, you are quite right, GW rose to Flt Lt before leaving the R.A.F. Fortunately I refrained from stating a rank, as I remember seeing his photo as Fg Off.
Please have a look at photos 004 to 011 in the Andreasson BA-4B (oz2927) plan. The model was built by my dear friend ‘BP’ and that chap has a nice ‘kit of hands’ (local joke meaning he is [very] good with his hands). His Peanut Santos Dummont 14bis is even more impressive on account of the aircraft type and the trimming done by ‘BP’. I greatly admire ‘BP’ work but I know my limitations only too well, so I prefer slightly larger models. Electric powered RC models by the way, the RC part helping my models to survive the ‘trimming’ stage…
Mike, you are quite right. I had never even heard the name ‘R.A.F.’ before… Please note, ‘R.A.F.’ and not RAFF… ??
Arn - 13/06/2020
Add a comment