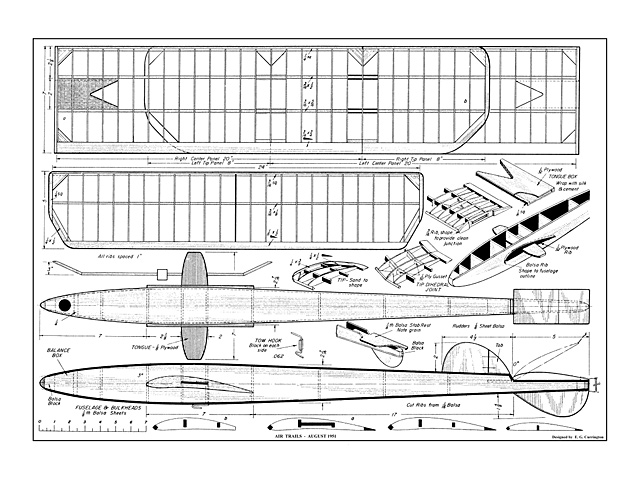 Note this unnamed Nordic glider by EG Currington was the winner of a 1951 Air Trails model design contest.

While the sky-rocket climb of a powered model may be exciting, nothing can give more satisfaction than the graceful maneuvers of a towline glider being borne aloft by a friendly thermal.

In America we handicapped gliders for years by allowing only 100 feet of towline and requiring a tremendous fuselage cross section. In contrast the Europeans could use more than 300 feet of towing line and a very slim fuselage. Yet we managed to rack up some surprisingly high times. The short towline led us to develop gliders that were distinctly different from the Continental type. We found that 100 feet of towline does not give the model much time for thermal hunting. Ground disturbance is high and thermals are always scattered. The model must of small up-lift areas. Characteristics of such a glider are short coupled wing and stab, and relatively large dihedral.

On the other hand, 300 feet of towline allows a more leisurely, roaming flight to pick up fully developed thermals or to obtain optimum glide. Such conditions do not require super-stability or exceptional spiral control. Hence, the basic Continental design has a relatively long moment arm and small dihedral. Incidentally, our rules are now more reasonable: 200 foot of tow-line and length 2/200 fuselage cross section.

While a tight circling glider may take full advantage of an individual thermal to go out of sight straight up, a roaming Continental design will go out of sight on the horizon. A sort of bouncing trip from one thermal to another in honey bee fashion. You can see that conditions determine the regional design.

While we were developing our own style of glider design, the Scandinavian flyers came up with something a little different. The basic characteristics were a very slim fuselage, long moment arm, thin but deeply undercambered airfoil and small tail surfaces. Another characteristic which is especially noticeable to the American builders is the comparatively small tip dihedral 'area' used at high angles.

At first Scandinavian glider sizes varied, but there was gradually formulated a design now known as the 'Nordic A/2'. They found that when all requirements - building time and cost, transportation and performance - were considered, a glider having a total surface area of between 495 sq in and 526 sq in will give the best return for the time and money. The standard FAI fuselage cross section formula, Wing Area/100, is used.

This month's winning towline glider design is based on the Nordic formula. The designer is not a Scandinavian, but an Englishman, EG Currington, from Manchester. The English model builders have adopted this particular type of glider whole-heartedly, and they are going in strong for the category.

This design has many features not normally found on our type of gliders, such as the tongue and box connection of the wing to the fuselage. It is a feature that should be investigated. The tendency for many builders to progress from small size to larger sizes is eventually brought to a stop when the 12 foot wing just doesn't fit into the subway or family car. This design will be a good start on which to test the tongue and box connection.

Aerodynamically, the model follows the basic Nordic design: small tip dihedral and long moment arm. Structurally, it has a simple monocoque fuselage which will take care of all sorts of landings.

Start construction with the wing as you will need it to line up the fuselage. Cut the ribs. Make a metal rib template.

The tongue-box must be made to fit the tongue well, but without binding. If you have no silk, wrap the box with thread and coat with cement. When fitting the boxes to the wing halves, assemble the two halves on the tongue. Place the wing on a flat surface. Line-up the leading edges so that they will be in a straight line. Make sure that both halves are lying flat on the surface. You can now let the cement set. Before sliding the boxes through the ribs, coat with cement the sides of the spars and the edges of the boxes.

After the initial cement has set, apply another coat at all contacts between the wing portion and the plywood box. When that has set for several hours, remove the wing from the jig, and apply cement at the bottom portion.

Make the stabilizer. You will need it to obtain an approximate balance while the fuselage is being constructed..." 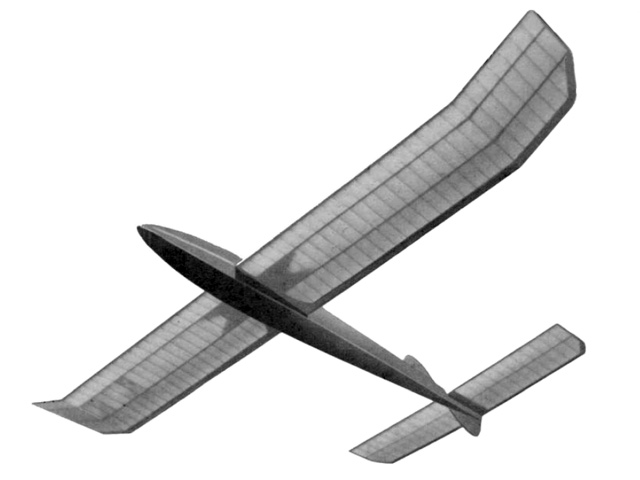