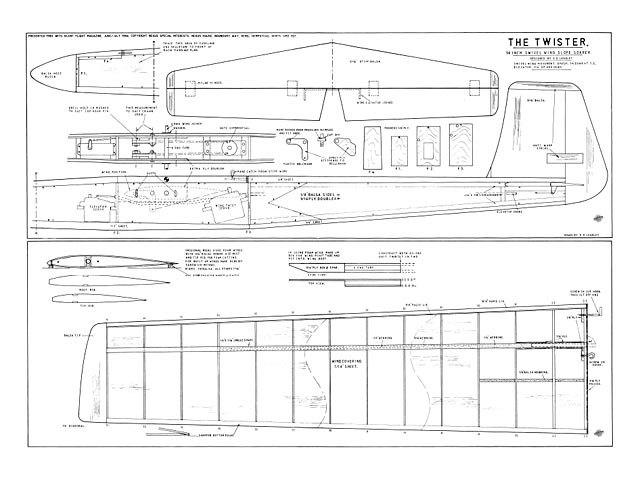 Several years ago I was asked: What would you like for Christmas? At the time I had seen a club member flying an attractive looking model on the slope and the unusual thing about it was that instead of ailerons it had wings that twisted on a centre pivot. I liked the model and thought the twisty wings would make a change so I sent Father Christmas a note asking for one. If only he had ignored my request - I have never had so much trouble with a model in my life and to make matters worse the other fellow said his was also a bit of a bleep bleep. This put me off twisty wings for a few years, until a little while ago when I thought I would build something different for a change and my mind drifted back to the twisty wing model. You will have noticed that I haven't mentioned the name of this model. It may still be in production (Withdrawn after a certain columnist's review. Ed) and I don't want to hear a knock on the door to find a big bruiser looking for me.

How to twist the wings easily and better than my last attempt was the first problem, and after a lot of drawing and rubbing out as well as moving servos and links about the table I came up with the system you see in this model, its so simple and cheap that when I see it I wonder why I didn't sort it out in five minutes. The fin shape came about because I was going to make it tee tail but changed my mind. The wing section is roughly Eppler 182, I already had a set of formers I had used before for wing cutting to this size and also I like the look of this section. If you want the Twister to go faster then you could use one of the modern racing sections, I am sure this system of control would work with other sections.

My models (there have been two, pilot error shortened the life of the first one) both used foam wings veneered with 1/16 inch balsa sheet and then glass-clothed. I was going to Solar film them but the wing looked so good when I rubbed the sheet down that I opted to glass cloth them so the grain would show. The plan shows a built up wing for those of you who don't have a foam cutting facility, unfortunately as there is not room to show all the ribs on the plan you will have to make them up by the sandwich method. As the foam wings are also covered in balsa, the built up root and tip rib can be used as the cutting former.

The Tail Plane: On any model this is the easiest part to put together so I find it better to get it built up and put to one side then it is handy when I want it. Make it out of fairly light balsa and if you wish, cut some lightening holes in the tail. Both my models needed a little lead in the nose so any weight you can save at the rear end will help the balance. Don't fit the elevators to the tailplane until later, as the elevator joining wire will have to be threaded through the gap behind the tailplane after the covering is completed.

The fuselage: Before starting any work on the fuselage ,dig out all the radio gear you are going to fit into the model and offer it up to the plan. My models used a Futaba 148 servo to twist the wings, a smaller servo for the elevator, a do it yourself Micron Mini servo (these are a real bargain) and a flat 300 ma battery. Most modern gear will fit, but if yours is a little chubbier make F2 and F3 a little wider than is shown on the plan.

Cut out the two plywood doublers CO exactly the same size then tack them together with a few small pieces of double sided Selotape, now everything you do to one will be the same as on the other. Make up the two small extra ply doublers and epoxy to the outside surface of each of the main doublers. These will finish up on the inside of the fuselage later when the model is all fitted together.

Mark the position of the Wing Pivot hole then offer up one of your bell cranks and mark its pivot hole and the position of the forward slot, this distance will vary depending which crank you have bought or made up yourself. I was lazy and purchased a Micro Mold pair. You can also mark the position of the rear slot which takes the hook for the wing retention elastic bands. Now drill out the hole for the wing pivot tube, the crank fixing screw and drill and file out the two slots. At this stage keep the slots short, they can always be lengthened later if required.

Before separating the two doublers mark the position of the ply formers to make the joining of the fuselage easier later on... " 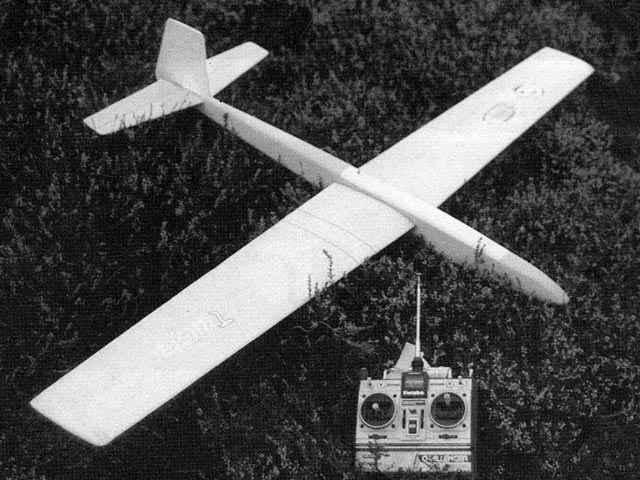