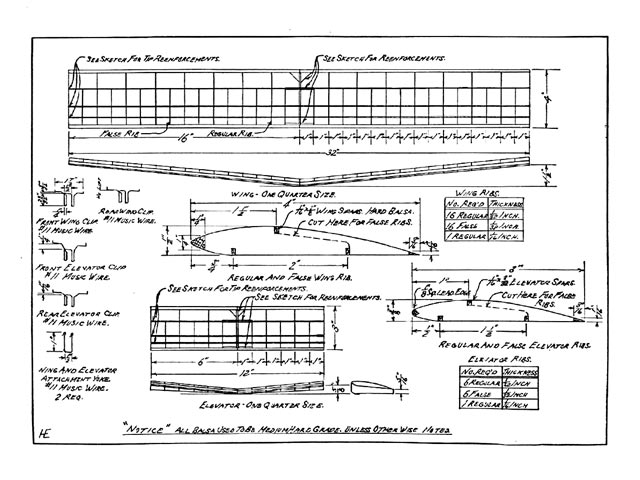 Note this is not a full size plan, this is a scan of the pages as printed in MAN magazine, in 1933.

Quote: "Build this Pusher that Goes Places. How You Can Build A Single Propeller Pusher That Made An Official Record Flight of 6,490 Seconds. By Harry Edsall.

SINCE the advent of weight restriction, builders have turned more and more to text books, airfoil graphs and experiment, than ever before. Since every model must have the same wing loading, it is up to the builder to incorporate every idea that he thinks will add to the ship's duration. Now weight restriction has not made planes so heavy that they will not soar. In fact the opposite is true: the models are using airfoils more similar to soaring planes. While the wing loading of a soaring plane is around 2-1/2 lbs to the square foot, the model has a wing loading of but 2.88 oz to the square foot. However weight restriction has brought out the best in design, in rubber motors and all to make a winner.

This design is the product of several models, designed and built by myself, in an effort to produce as good a duration model as my seven years of experience would permit, and still have the model weigh one ounce for every fifty square inches of wing area.

In my effort to produce such a I finally concentrated on the single pusher. This is, in my opinion, the best outdoor duration type. Of course the motor stick on most models is weak. However on my model it is of generous size, and so as not to be too heavy I built up the stick. This makes a stick not only unbendable but also practically unbreakable, Also in making a single pusher instead of a twin. I eliminated one motor and prop and was able to incorporate the extra weight into the model, making a much stronger structure.

We then have a model not only more efficient than the twin pusher but also much more sturdy.

This model is known as an Outdoor Scientific Single Pusher and since our model has a wing area of 128 sq inches, it goes in Class D, this being for-models with from 125 to 150 sq inches. The model must also weigh at least 2.36 oz. This model will easily meet the requirement. The original weighed 2.65 oz or slightly over.

This model first saw the light of day sometime in May 1932. For several weeks I was content merely to test it in a field near my home, and here, with but little over a third the possible number of turns in the motor, I was able to get five minutes with the model. I then saw I had a model that should be able to break the then existing world's record of 340 sec held by Steve Klazura of Chicago. I did not realize however, that I was to break it by such a large margin. It was not until June 17, 1932 that I was able to wind the model to capacity. This was during the annual contest for outdoor scientific single pushers held at the local airport, under the sponsorship of the YMCA.

A FTER several test flights, I wound the motor to capacity, about 1250 turns, and let her go. By the time the prop had stopped turning, the model was a mere speck and had to be kept in sight with binoculars. It then was almost to the clouds and it did not take long to get up to them, and there she was riding the clouds as easily as if Kronfeld himself were at the controls.

The plane drifted slowly with the cloud. However, we on the ground were not having an easy time of it. After the first half hour, necks were stiff and everyone was in danger of losing his life as the cars that were following the plane were filled to overflowing with the model enthusiasts. Then, after what seemed hours, a small piece of cloud passed between the timers and the plane and the flight was officially over. The model in that time had flown over eight miles, the correct distance not being taken as the NAA recognizes only records for duration. The three stop watches gave an average time of 1 hour, 38 minutes and 10 seconds (6,490 sec.) Truly remarkable time for any model. For most of the flight the model had held an altitude of over 1500 feet.

The model gains its time through an extraordinarily good climb and a flat glide and under good conditions will soar, as in the above case. It will, at first, climb almost straight up to 100 or 150 feet then level out and climb rapidly until the motor is almost run out.

Well, I have told you about the plane and its performance, now here is how to build it.

First let me caution you. No model will be in the championship class unless it is made as carefully and as perfectly as human hands can fashion it. Therefore, do not hurry; be sure everything is all right before you cement: give the parts plenty of time to dry..." 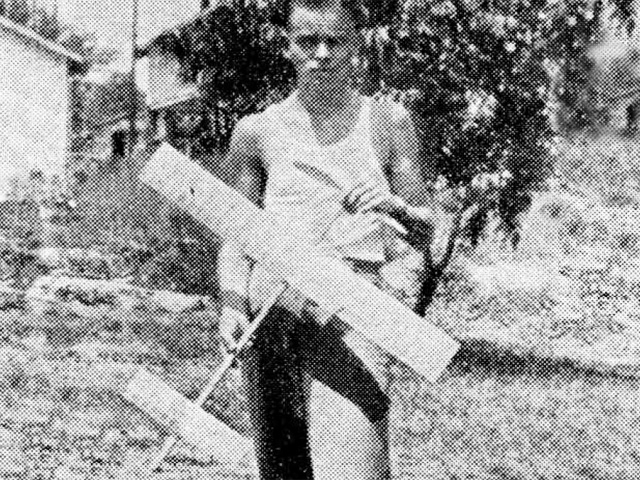