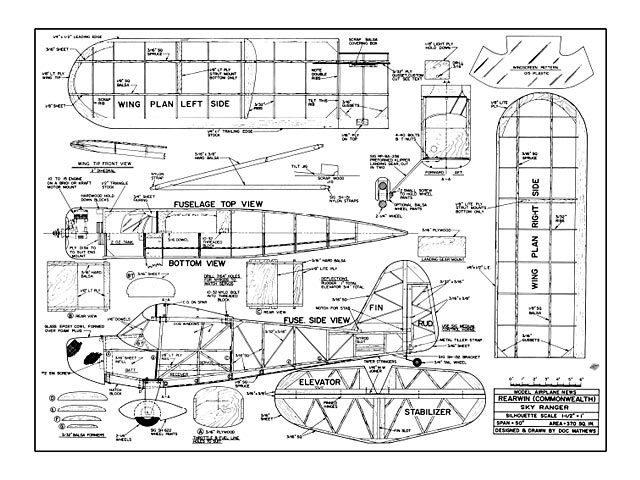 FOR YEARS I have been itching to build a Rearwin Skyranger. This silhou-ette scale Skyranger project was inspired by a superb 1/5-scale design by Gene Salvay published in MAN, November 1970. His background as an employee of the Rearwin Aircraft Company in pre-war Kansas City had inspired an exact scale model of great beauty, but complex structure.

My desire to develop an easy to build, light-weight, and smaller version was enhanced by a photo in Vintage and Veteran Aircraft Guide. The custom paint job on that particular version was more attractive than the solid color factory version. They don't even look like the same aircraft.

As presented here, the Skyranger is simplified structurally. I have taken liberties with the contours, but the model is still reminiscent of the prototype, both statically and in flight.

THE PROTOTYPE: Designed in 1939 as a replacement for the popular Sportster, the Skyranger was first flown in April 1940. Engineer Robert Rummel saw his work enter production in August 1940, and this version was powered by either a Continental 65 or 80. Production continued through early 1942 with a total of 82 units sold. After WW II, the production rights were purchased by Commonwealth, and an additional 275 units were produced. Approximately 90 Skyrangers are registered in the US, and they can often be seen at fly-ins and in hangars around small airports.

THE MODEL: This 1-1/2 inch to the foot cutie is intended for .15 cubic inch glow or .10 cubic inch Davis Diesel converted power. Power was marginal with a glow form of the O.S. Max 10FSR. A change to the Davis Diesel head, and a 9x4 or a 10x4 prop brought the model to life. If you don't own a Davis conversion, I recommend a sport .15 capable of turning a 9x4 prop at a reasonable speed. The silhouette scale concept emphasizes simplicity coupled with lightness, relatively low power, and slow flying speeds. The Skyranger fits those parameters well. The double curvature of the fuselage cross section was eliminated, and the stab mount simplified. Both changes are barely discernible, even to those well acquainted with the prototype. Don't let anyone criticize the deviations, they are there for a reason. The dimensions and outlines are quite close to true scale, however. The wheel pants were used primarily for decoration, and they make grass takeoffs nearly impossible. The flight photos were taken from a hand-launch start - something this model responds to very well. Other performance areas are just plain delightful. In fact, the model is as gentle as a pussycat all the way.

CONSTRUCTION: All balsa and spruce joints are glued with aliphatic resin glue, such as Sig-bond or Titebond. Five-minute epoxy was used on all plywood joints. Wood sizes and hardware items are all standard hobby shop items, and no unusual tools or equipment are required, just the usual hand tools. Take care in choosing wood grade and density. The model's weight is not critical, but the lighter she is, the better she'll fly.

TAIL GROUP: The empennage is straight-forward and simplified. I find it easier to cut the tip outlines after assembly. The wire elevator connector is more easily epoxied if it is done before separating the halves. Install the hinges after covering, using a toothpick section pushed through a pre-drilled hole, and secured with instant glue.

WING: A plywood master rib pattern can be developed with carbon paper, tracing paper, or ironed on from a Xerox copy. Cut the ribs from stacks of light C-grain sheet using a jig saw, or by carving and sanding.

Build the wing panels from the bottom up, over the drawing. Cut bottom spars flush with the outside of the tip ribs, position the light ply tips, then cut the top spars to match the tips. The center section is built integrally with the left wing panel, then cut away.

By tilting the inside wing ribs, and using the jig, I only needed to block up the wing panel and sand in the bevel using a table edge as a guide.

No dihedral gussets are shown on the plans as my experience has taught me a better way to develop a good fitting joint. After the three sections have been epoxied together at the correct dihedral angle, cut through the ribs using hack saw blades taped together. Place a blank section of plywood into the slots, and mark top and bottom outer lines. Remove and cut the ply to the lines, and you'll have a gusset that fits the exact dihedral angle.

Carve the leading edge to outline, sand the entire wing, and set it aside for use in the fuselage construction steps.

FUSELAGE. Two identical sides are constructed in the classic technique. The triangular stock is fitted for the firewall, and the bulkheads are fabricated directly over the plans. All holes are located and drilled, and the basic box constructed. Pin the right unit flat over the side view, install the four major forward section units, check for squareness with a triangle, and epoxy them into the slots in the right side.

Inset the left side onto the bulkheads to complete the forward fuselage box. Block up the tail post at the mid line, and pull the left post down onto the right one. Cut balsa cross pieces to length over the top view, and glue them in place with the fuselage still pinned down on the board.

Epoxy the wing saddles in after the fuselage is free of the board, and epoxy the 3/16 dowel onto the front saddle with the fuselage inverted. This needs to be in the center line. Place the completed but uncovered wing onto the saddles and drill a hole through the trailing edge down into the plywood mount. Either epoxy a pre-threaded hardwood block or appropriately tap. If the block is used, lubricate the nylon bolt to pull the block up tightly against the underside of the ply mount. 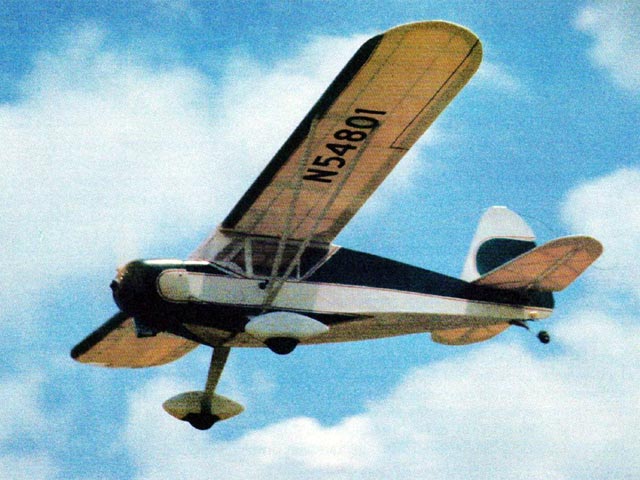