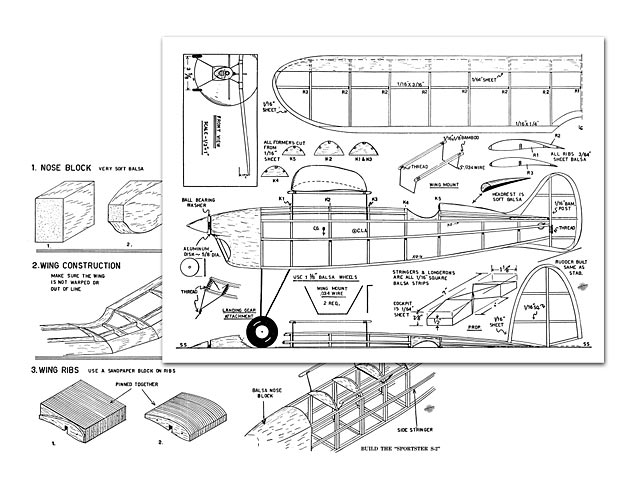 Quote: "PRIMARILY, the Sportster S-2 was designed for the beginner who has just broken the ice of this pleasant hobby called model building. The ship, however, is very well-suited for the expert, also, who does not usually spend much time on building an individual plane. But before we get down to the task of fabricating this dandy craft, a word about the design and the ship itself.

A quick glance at the plans will show you that the S-2 possesses exceptional spiral stability, which is very no-ticeable under full power. Its center of lateral area is directly on a line with its center of gravity - this being caused by the high thrust-line, the bellied-down fuselage, the under-slung rudder, and the slightly over-sized wheels. A high degree of longitudinal stability is obtained by using a large stabilizer (37% of the wing area). A high climb is insured by the parasol wing - the propeller having a tendency to pull up and over the wing drag.

All material used in the construction of the S-2 is of generous dimensions, so there need be no worry that in the advent of a crack-up the ship will be demolished. And now, boys, let's get down to making the ship.

MAKING THE FUSELAGE: First, you will have to cut the plans out of the magazine - or if you wish to preserve your copy, trace the plans onto your own working paper or cardboard. Now it is advisable to cover the plans with a sheet of ordinary wax paper to prevent the glue from sticking to them.

Pin strips of 1/16 square balsa upon the plans as indicated by the mark 1(0. Cut your balsa-strip up-rights to size, making two for each station. And as only one side of the 5-2 is built at a time, glue one set in place and put the others aside until you begin work on the opposite segment. By following this method, you will be able to work much more rapidly and will not have to stop to slice or add to your uprights to make them fit for the second fuselage side.

Now cut two of each cross-brace, as seen on the top-view, and connect the completed sides. Set the frame aside to dry. And while it is drying, cut from 1/16 sheet balsa, one of each of the formers. From a very soft block of balsa 2 by 2-5/8 by 1 inches, carve the nose piece to the shape shown on the plans. Sandpaper the block till there are no bumps or ridges showing. Then take a very hot soldering iron and burn out the insides to the required thickness. Cut a hole in the front of the block to the shape shown on the front view, which is used to gain access to the prop-shaft when putting in a new motor or changing bent hooks.

Now cement the nose block and the formers in place. When the formers are dry, glue the stringer in place, also the two side stringers that are glued directly on the top of the uprights. If more strength is desired, a stringer may be glued on the bot-tom of the fuselage, but this is not necessary. Make the cockpit out of 1/64- sheet balsa and glue in place be-tween K4 and K5. Carve the headrest from a soft piece of balsa and cement it in place as indicated on the plans.

Bend the landing-gear struts from wire, glue and thread in position. Slip a pair of 1-1/8 hard balsa wheels on the axles and put a drop of cement at the axle ends to keep the wheels from falling off. The wing-mount is very easily made from wire and bamboo, as shown in the plans. Glue the wing-mount in place against K1 and K3, as shown in the plans. That completes the fuselage.

The rudder is built in the same way as the stabilizer, with the exception of the rudder-post, which is a piece of 1/16 square bamboo. The rudder-post is also used as the rear hook retainer. Bend a rear hook, as shown en the plans, from .034 wire, then glue and thread it in its proper location. The rudder may now be glued in place. No tail-skid is needed as the under-slung part of the rudder acts as a tail-skid.

WING CONSTRUCTION AND COVERING: In building the wing, care should be taken not to have any warps or twists in it. Carve all ribs from 3/64 sheet balsa. Make twelve of R2, one of R1, and two of R3. Shape the leading and trailing edges to conform with the plans. Then pin the leading and trail-ing edges and the center spar on the plan. Insert the ribs and glue firmly. Cut the wing tip out of 1/16 sheet balsa and glue it in place.

When the wing has thoroughly set, crack the spars to one inch dihedral. And then glue the breaks well to make for a much stronger wing. The leading edge is covered with 1/64 sheet balsa to keep the tissue from sagging between the ribs. A 1/2 by 1/64 sheet of balsa is glued on the top only. The entire model is covered in the conventional manner, with the exception of the bottom of the wing. Since the airfoil is an under-cambered one, it is necessary to dope each rib when covering so that the wing will keep its true airfoil.

Spray the entire model with water and set aside to dry. When the tissue is thoroughly dry, the whole job is given a thin coat of clear dope and the nose block is given one or two coats of colored dope.

PROP AND BEARING: Now cut out a disk 5/8 in diameter from a sheet of aluminum, punch a hole in the center, and then glue it to the front of nose block as shown.

The propeller block is 7/8 by 1-1/8 by 7 inches. Cut the blank to the design shown in the plans, then proceed to carve in the usual manner, taking care to have both blades identical. The prop is 1/8 thick at the hub and tapers to 1/32 at the tip. From a small block of balsa, carve a spinner and make a groove for the prop hub, then glue it to the prop. However, of course, the spinner is optional.

Balance the S-2 at the CG. If it is tail-heavy, add a bit of clay to nose until it balances correctly. Now take the ship to your favorite flying-field, give the prop a few turns, and launch the model into the breeze. If it stalls, bend the rear of the stabilizer down until the fault is corrected. Now give the rudder a bit of right turn (looking from the rear).

When given full number of turns, the S-2 should climb spirally. If any trouble is to be found in the course of construction or flying, just write the author in care of FLYING ACES, enclosing a self-addressed stamped envelope, and he'll be glad to help you all he possibly can. State your questions clearly and simply, and going into great detail only when it is absolutely necessary, and Sid Struhl will ship you complete instructions by return mail on what to do about it and how to do it.

That's the complete story of our Sportster S-2, fellows. And from now on she's all yours! But if you get any ideas that might make the ship better, why don't you see if they can't be worked out. You know, you might try a 3-bladed prop, movable control surfaces, or a slew of other things that you've been meaning to try for a long time. And if you do work out anything of this sort, don't forget to tell us about it in the What Do You Say? department. On top of that, you might shoot us a photo of your model to be used on our picture page, We'll be able to print only the first two or three, however. You'd better get to work pronto! We're done gabbing, lads, so - take it away!" 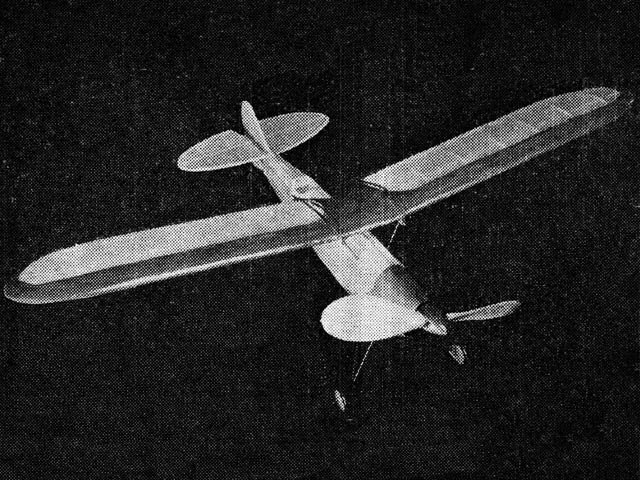