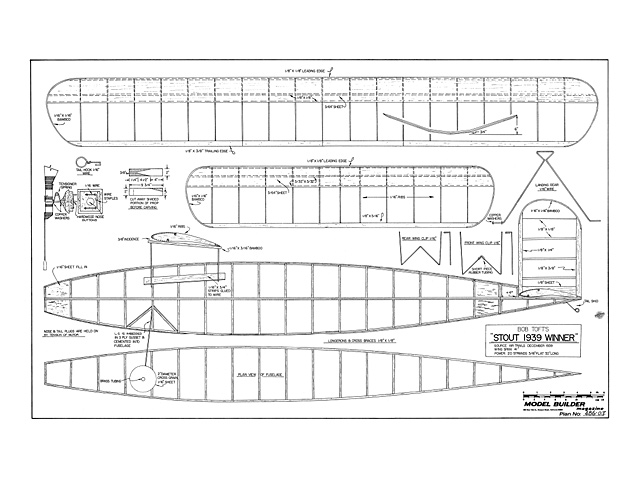 This is Bob Toft's 1939 Stout Trophy winner. It had a 36+ minute flight at the Nationals. Plans and article appeared in the December 1939 issue of Air Trails, from which the full-size drawing was made. The article called this a typical American model, as it was finished at five o'clock in the morning, a few hours before it won first place in the Minneapolis Model Aero Club's eliminations for the Nats. The designer/builder won an all-expense airline trip to the Detroit Nats.

The instructions included more than was normal for the time about flight trimming, as follows:

The original model was adjusted by setting the wing and tail at a definite angle to each other - two degrees angular difference - and maintaining that relation during all adjusting. The wing shifted to produce the best glide possible. The center of gravity was about an inch behind the trailing edge of the wing when the best glide was had. The wings were perfectly straight with no warps for adjustment. The rudder was warped slightly for a right turn. The nose plug was offset to produce the correct climb adjustment.

The model did not climb very fast, but a long motor run gave it more time to strike a thermal. Even without the help of thermals, the glide stretched out the time pretty well. The model circles to the right under power and in the glide. The circles are about one hundred feet in diameter, because the designer thinks that too tight a circle will induce an unnecessarily steep glide. The maximum turns are twelve hundred, a few of which remain after the prop has folded."