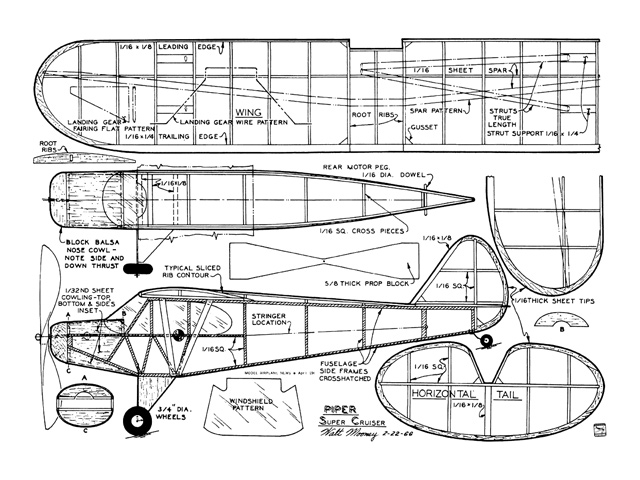 Note this plan was derived from the raw scan at HPA (see datafile). This version has been stitched together, aligned and cleaned up. Saved at 500 dpi as a 2-colour bitmap.

Quote: "
The Piper Super Cruiser was an attempt by Piper Aircraft to extend the capability of the Piper Cub. It was a very successful effort which would carry three people with a considerable in-crease in range. It also was one of the first Piper airplanes to deviate from the 'Cub Yellow' color scheme. Most of the Super Cruisers were finished with red wings and tail and a red and cream colored fuselage.

The Super Cruiser is almost the ideal shape for a free flight model and it has been built by many modelers as a gas-powered model. As a small simple rubber model, its performance is very hard to beat. This design has been in the Old Perfessor's stable longer than he would like to admit. He first broke a minute with it indoors in the Athletic Cage at MIT in 1949. Over the years three others were built to the same design and all flew very well so they who build one should end up with a very nice little flyer.

Designed for simplicity, it therefore has only enough detail to really look like a real airplane. Jury struts, brace wires, lights, pilot, landing gear shock absorbers, etc have purposely been omitted. Main wing struts are used because it just wouldn't look right without them. The model building project could be further simplified by omitting the top fuselage stringer, struts and half of the wing ribs and it would fly just as well. It wouldn't look quite so scale-like, but it would make a nice sport flyer for a beginner at indoor scale to cut his teeth on.

Construction is conventional and uses standard methods throughout. All materials should be easily available at the local model shop. All wood parts are made from standard strip and sheet balsa sizes except the nose block. Other miscellaneous details required are the wheels, propeller, windshield, windows, rear motor peg and propeller shaft. If desired, the nose block and propeller block can be laminated from several layers of sheet balsa. Use 1/32 diameter music wire for the landing gear and propeller shaft. Hardwood dowel is used for the rear motor peg. Wheels can be hardwood, plastic, or rubber at your discretion. Use thin clear plastic, not more than 1/64 thick for the windshield and windows. Covering is lightweight model tissue, either Japanese or Superfine.

Begin the fuselage by making two side frames over the cross-hatched members in the side view. When dry, remove from the plan, separate, bevel at the aft end, and starting at the aft end add cross pieces as shown in the top view. Cut formers A, B, and C from 1/16 sheet and install on the fuselage frame. Insert the side cowl sheets in the first space at the front of the fuselage sides. Then cover the top and bottom of the cowl area wtih sheet balsa. To save trouble and wood make bond paper patterns first to get the actual shape of the top and bottom of the cowl. Carve the nose cowl to match the contours on the plans and sand to a smooth fit on the front of the fuselage. Bend the wire landing gear to the shape of the pattern on the plan and cement it in place across the bottom of the fuselage. Double cement the landing gear wire in place because it will take the highest loads of any part of the model.

Add two side stringers and butt against the upright that supports the rear motor peg, sand flush with the sides at the front of the side windows. The top stringer cannot be added until assembly is started.

Both the vertical and the horizontal tail are built flat over the plan. The leading edges and tips are sanded round and the trailing edges slightly tapered to a streamlined section.

Start wing by cutting the wing spar out of 1/16 sheet. Then pin the leading and trailing edges down on the plan. Either trace the right tip on a separate piece of paper, or cut it from the page and locate it in the proper position so you can have a complete wing plan. Now place the 1/16 square rib bottoms in place. Cement the strut supports in place. Now slip the two root ribs over the spar and cement the spar down to the rib bottoms on the left hand side and the left root rib in place. This will leave the center and right hand side of the spar extending above the work bench because of the dihedral built into the spar. Slice enough rib tops from sheet balsa and add them to the left wing panel. Cut out the left wing tip pieces and cement them in place, noting that they are raised above the surface of the work bench to meet the spar.

Now carve the propeller, or select a ready made one. Drill a 1/16 diameter hole in the nose block - note the down and right thrust - and install a length of aluminum tubing for a shaft bearing. Bend the propeller shaft as shown on the plan. Start at the winding loop at the front end in order to get a neat job. Put it through the propeller, add a couple of washers, sequins work well, thread it through the tube in the nose block and bend the hook to hold the rubber motor.

Clear dope the model with two coats of very thin dope. Add color trim using colored tissue. Cut and fit the windows and windshield and cement them in place being careful not to smear them with cement. The edge of the windows and the top of the wind shield is indicated by the trim line of tissue. Cement the horizontal and vertical tail in place and then the tail wheel. Smear a 1/4 in diameter drop of cement on the side tissue at the rear motor peg spot for reinforcement and then cut a small hole in the tissue for the peg. Cement the wing struts in place. Add license numbers using either tissue or decals.

One loop of 1/8 flat rubber a foot long is right for initial test flights so install it next and then check the model for unwanted warps removing them if found. All surfaces should be warp-free. The center of gravity of the model should be directly below the spar. If not, ballast the model with modeling clay at the nose or tail to make it so.

Test glide the model, warping the trailing edge of the horizontal tail up or down to achieve a smooth glide. Start test flying with ROG attempts, using hand winds working up from 50 turns about 25 at a time. Adjust the power flights by means of thin balsa shims between the nose block and cowl to change the thrust line in the desired direction. Experiment wtih motor lengths and sizes to get the best possible duration and have fun flying the model Piper Super Cruiser." 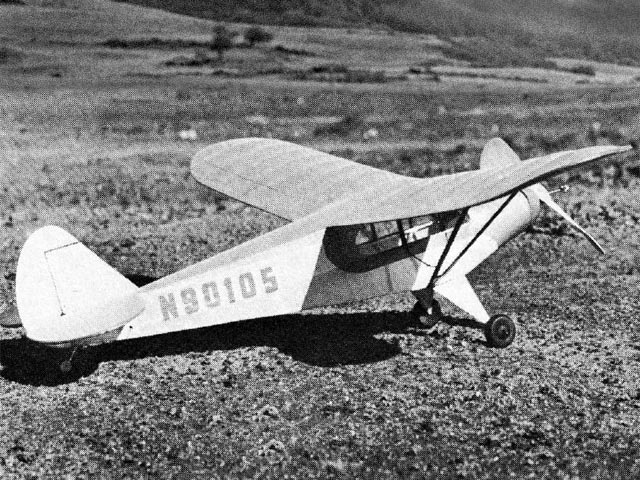