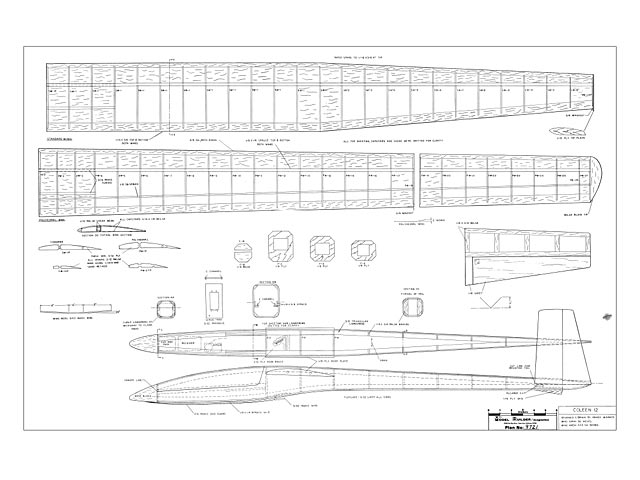 Quote: "Coleen-12, by Randy Warner. The Coleen-12 is a designing lesson in how to get slim, smooth, graceful lines using standard building materials and construction methods. Two wings shown, for slope and light thermals.

First let me clear up one thing. Coleen is definitely not twelve years old. Nobody is that blind. This is merely the twelfth sailplane I have built since I've known her. Let's see, that makes for an average of one prang every month and a half. I think I'd better finish this article while there's still an airplane to write about.

The C-12 was originally built with the flat standard wing and it performs quite well as both a thermal and slope soarer. My longest thermal flight with that wing was fifty minutes, from the SLO Flyers field in San Luis Obispo. This occured when a shear line developed directly over the field and I disappeared several times into a cloud cover reported by the Army to be at 3,500 feet. I would like to take this opportunity to thank the three or four fliers with binoculars who enabled me to fly the C-12 back for a smooth landing.

The higher performance polyhedral wing was constructed in preparation for the Western Soaring Championships that were held in what has to be the meadow muffin capital of the free world; Hemet, California. Hemet is the only place where I've had to scrape the runway off the fuselage after each landing. The wing did its job and got me my first real live trophy, for fifth place. I think Mark Smith got a complementary spatula for finishing first. So much for the literary hilarity, let's build.

The C-12 uses mostly standard construction techniques so I'm just going to touch on some of the difficult points. I think the plans are pretty much self explanatory.

FUSELAGE: The only thing you have to watch on the fuselage is the radio installation cabin construction. V-tails can and do present a few minor problems.

First, the canopy portion of the sides is outlined with a felt tipped pen before construction is started so you will have a point of reference when it comes time to cut the canopy away from the rest of the fuselage. Add the 3/8 triangular Ion-gerons. When these are dry, add the 1/8 x 3/8 balsa fuselage braces. Epoxy F-2, F-3, and F-4 to one of the sides and taper the longerons near the tail. Add the other fuselage side and pull the nose and tail together. Tack glue the two halves of F-1 together and glue in place. Add the bottom sheeting, skid, skid guard, and tow hook. Glue on the top sheeting and the nose block and let the whole mess dry completely.

Next, armed with a razor plane and a good supply of sandpaper, sand the fuselage until your arm falls off. Remember, you've got big longerons in the corners so you can make the fuselage appear to be quite round. After sanding, cut the canopy away and glue in the spruce cabin braces, using clothes pins to hold them to the fuselage sides. Make sure these are parallel because they determine the alignment of the sliding servo rails.

WINGS: the standard wing is the easiest to build so I'll start with that. First lay out the bottom sheeting and capstrips. Add the bottom spar and all ribs. Epoxy in the 3/16 brass wing tubes and add the top spar. Add balsa leading edge and shear webs on both sides of the spar. Glue on the top sheeting and let dry well. Flip the plans over and repeat for the left wing. (Rub ordinary 3-in-1 oil on the plans, particularly at glue joints, so they will show through on the reverse side). Shape the leading edge, give the whole wing a good general sanding and cover.

The polyhedral wing uses construction similar to the standard wing, but the undercamber provides the proverbial fly in the ointment. First, pin down the leading edge. Next, add all the ribs, pinning the trailing edges in each directly to the plans. Jack up the leading edge of each edge of each rib 1/2 inch to allow for the bottom leading edge sheeting. Add the top spar and top trailing edge sheeting. When dry, flip the wing over and add the bottom spars and trailing edge sheeting. Epoxy in the wing tubes and add all shear webs. Next, add top and bottom leading edge sheeting and capstrips. Repeat this procedure for the left wing and both tip panels. When all is dry, bevel the ribs on the tip panels to the correct angle and glue the panels together. Epoxy a strip of nylon cloth around the dihedral junction to serve as a dihedral brace. Add tip blocks and finish similar to the standard wing..." 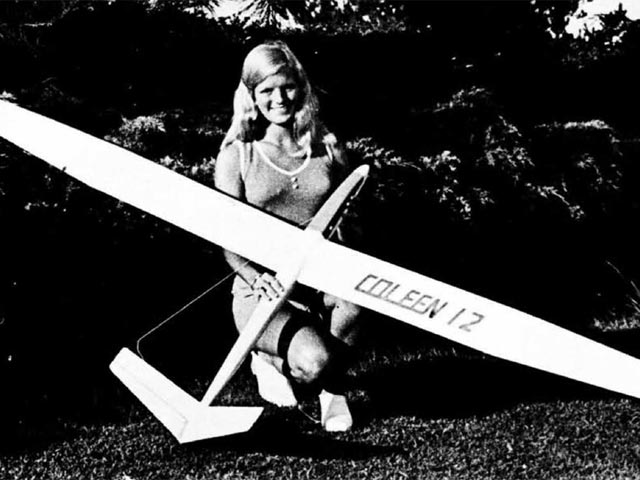