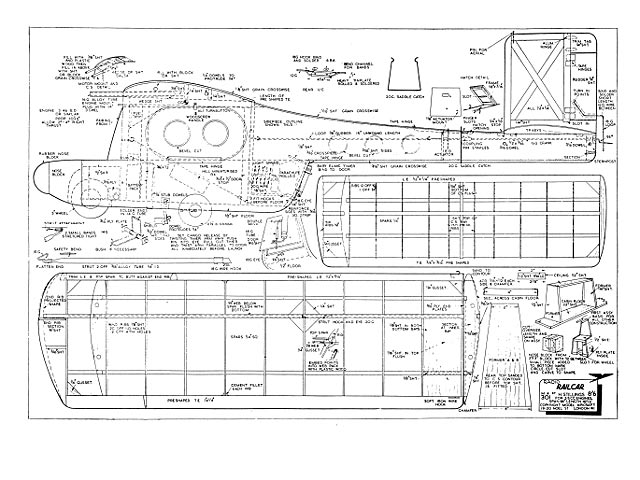 Quote: "And so to RADIO. PART II - in which HARRY STILLINGS describes the beginner's R/C model he has designed especially for this series.

THIS month I introduce Radio Railcar, an out-of-the-rut R/C model, designed especially for this series. Steady and stable in flight, it embodies many unusual features as follows:

The model has been thoroughly flight-tested, and can be confidently recommended as an ideal first R/C venture. Being fairly slow-flying, utterly stable and entirely without vices, it gives the radio novice plenty of time to think whilst gaining experience in the use of the button. It is easy to get airborne - if level tarmac is available it will ROG after a 50-60 ft run; if you have no suitable take-off surface it is simplicity itself to launch, no running or hurling being needed; just a vigorous push into wind (the right hand doing the pushing at the tail while the left holds the model straight and level at the cabin) will do the trick, unless there is only a very light breeze or dead calm, when two or three run-ning steps may be needed. To assist launch and climb in a flat calm only, it may also be found useful to pack up the trailing edge of the tail-plane not more than 1/32 in. Once airborne the model will fly straight and level until the button is pressed, when it goes into a safe turn which can be held on for 2 or 3 sec. without beginning a spiral dive.

Much thought and effort have gone into the design of the prototype, and the plan should be followed in every detail for success - modifications (except possible adjustment of motor thrust) are not only unnecessary, but will almost certainly adversely affect the flying performance. For example, the degree of throw on the crank (and thus rudder movement) has been very carefully worked out to give adequate control without excessive turn, and spot landings will soon be relatively easy to achieve.

Radio Railcar is also the perfect model for carefree, relaxed flying on a pleasant day, as it will fly on happily without the need for constant control. If a little added excitement is desired the cargo compartment can be brought into use to drop a parachute or balsa-wood 'bomb'; a suggested method of release, using a timer, is shown on the plan; this should be set for 3-4 min., to give ample time for a good height to be reached. Note that cargo must be light enough to avoid upsetting fore-and-aft trim; if necessary a little ballast must be taped to the nose to keep the CG in the right place; when the cargo is released, this may result in a very slight nose-down attitude, but that is preferable to any tendency to stall.

SPECIAL NOTE. It will be seen that the usual plan view of fuselage has been omitted - this has been done deliberately, as, owing to the sloping fuselage sides and varying contours of tail-boom, it would only be confusing. Provided the basic cabin assembly is accurate, and the sides are cut exactly to plan, the fuselage must 'come right' when the tail ends are drawn together. All necessary guidance is given in elevation and detail drawings.

Construction is quite straightfor-ward, but all joints must be pre-cemented throughout, as this adds greatly to the inherent strength... " 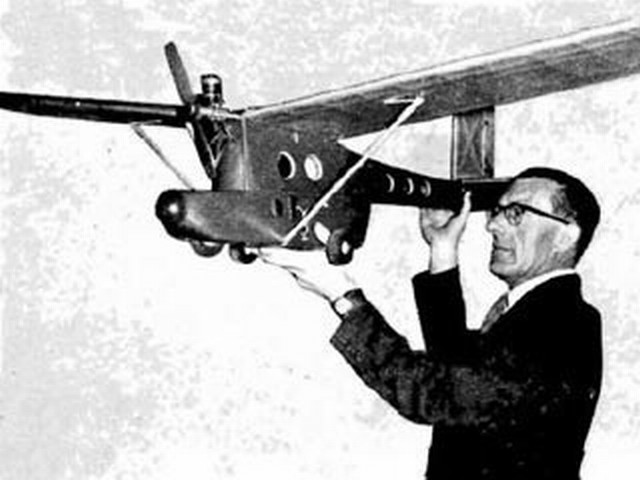