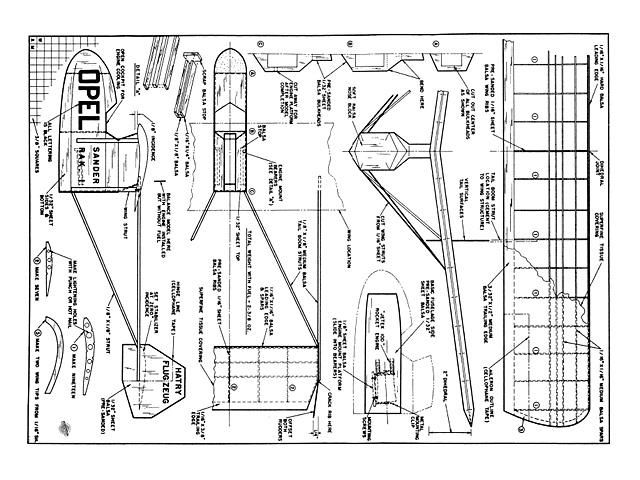 Many thanks to Pit for confirmation of the designer and date for this one (Walt Musciano, from Air Trails, August 1951).

It was only a short twenty-two years ago that a reaction-propelled, man-carrying aircraft was but a dream.  Then Fritz von Opel and two brilliant associates demonstrated the world's first successful airplane propelled in such manner.

Professor Sander designed the rocket engine which consisted of five rocket tubes fired successively to prolong the flight. If fired simultaneously the engine would have developed enough power to lift 6,600 pounds.  Engines of similar design had been tested in race cars built by Opel, a famous automobile manufacturer. When ground tests proved successful the designers decided to attempt rocket-powered flight.  They engaged Ernest Hatry to fashion a wheel-less airplane that could accommodate their engine.  This was the trio responsible for the world's first successful reaction-engine powered, man-carrying aircraft.

Our free flight model has same type powerplant as the full-scale prototype, a solid fuel rocket.  A Jetex 100 engine developed more than enough power to attain reasonable altitudes for some sensational gliding. Best time we made was just under eight minutes.

A model three-fourths the size of ours should work well with the Jetex 50, if constructed with care to insure a very light craft.  A half size model should go like blazes.

Should any thrust line alteration later become necessary, insert shims of sheet asbestos (supplied with the engine) between balsa mount platform and aluminum engine clip at the front or rear bolt connection.  Balsa mount platform must fit the bearers quite snugly, and is held in place by a friction fit. It is removed with the rocket engine for recharging.  Nose piece is solid, because we required the weight in nose to obtain correct static balance.

All wing ribs are identical and cut from rather soft sheet balsa.  Cover wing with finest tissue available.  Use clear dope as the adhesive, and when watering tissue be certain to pin wing to a flat surface to prevent any warps from forming.  While pinned, two thin coats of clear dope can be applied, one panel at a time.

The stabilizer is constructed in a similar manner as wing.  Also, it is covered in same way.  Rudders are cut from medium sheet balsa and sanded.  All strut material should be sanded smooth.  Slit top wing tissue covering, smear cement on strut end, and attach struts at proper angle.  Cement them to the wing structure, not just to the tissue.  When this is dry, cement tail surfaces in place.  Struts are flush with outside of the plate rudders.  Cement wing to fuselage-pod.  Now remaining struts can be cemented in place.

To save as much weight as possible, fuselage was not doped; since we could not use decals on the bare wood surface, the large black letters 'OPEL' were inked onto a sheet of gummed paper (package label) and stuck in place. The smaller lettering was drawn on a buff gummed label, then glued in place.  Lettering on fin is same as fuselage.  The colored strut and pod trim is red dope, thinned about 50 percent, applied sparingly.

Balance model at point indicated.  The Jetex unit can be moved some to achieve this balance point.  Should model be badly out of balance, use modeling clay in nose or tail.

When gliding, release model from shoulder height with a gradual push, aiming at a point on the ground about 30 feet away.  When glide is flat and to the left, you are ready for powered flight!  Do not release model the moment the igniter wick is lit, but wait for a hissing sound.  Launch as though you were test gliding.  If model glides well yet seems to stall under power, a little more down thrust will correct this.  Adjust model for circling because with balance point as shown it will stall if set for straight flight.

There are few scale models available which will produce such an effortless climb.  With your Opel rocket plane properly adjusted, you will find that when power cuts there is no dipping, instead the model continues circling and begins a slow descent – an open invitation to any nearby thermal to come and get it.  So have the glide just right first – flat and to the left." 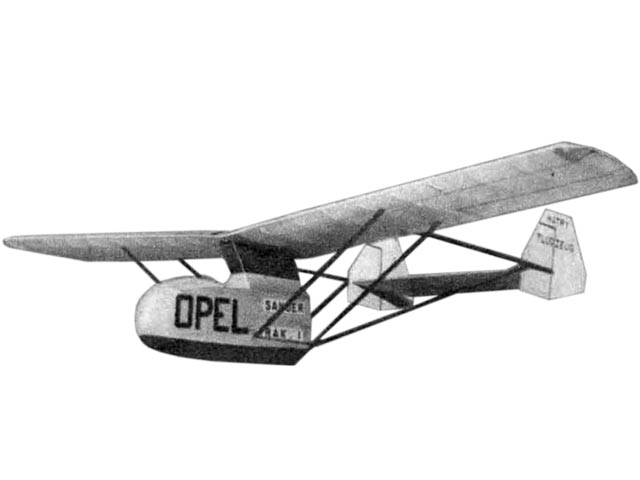