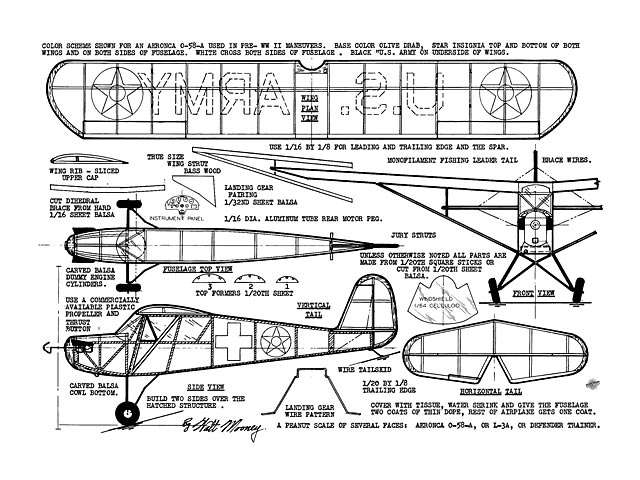 Reminiscent of the famous Megow 10 cent'ers, this model follows tried and true construction techniques. The odd-balls are nice, for a change, but here's one you know will fly.

The small, two-place airplane that was most popular and numerous during the late thirties was most often called the 'Cub' or the 'Piper Cub', and to the general public, all such high wing, strut-braced, fabric-covered, two-place light airplanes were 'Cubs'. Sometimes a name has a great deal to do with success, and Piper lucked out. As a consequence, not too many people realized that the Cub had any competitors.

Piper did have two very significant competitors prior to WWII. They were Taylorcraft and the Aeronautical Corporation of America (Aeronca). The Defender, or O-58-A, or L-3A, was a product of Aeronca, which by the time the Defender was built, was called Aeronca Aircraft Corporation, and was based in Middletown, Ohio. The Defender was announced in 1941, and could be purchased with a choice of Continental, Franklin, or Lycoming engines. It was an improvement of a previous tandem trainer, was purchased by the Army for use as a 'Grasshopper', and was known as the O-58-A in military maneuvers in the southwestern part of the USA.

The reasons for the ascendancy of the Cub over the Defender should be attributed, in the opinion of the author of this article, to two things. First, it was a little more crowded in the cockpit and the Cub was crowded enough. Second, its flying characteristics were not as nice, especially with respect to adverse yaw due to aileron use, and directional stability. Therefore, it was harder to fly well and somewhat less forgiving of ham-handed pilots.

These particular short-comings are certainly not detrimental to free flight scale models (no ham-handed pilots; no pilots, in fact) and may even be beneficial in a peanut, where they tend to give some inherent spiral stability. In any case, the Defender makes a good Peanut.

Construction of this model follows the tried and true construction techniques. In fact, it might almost be considered old-fashioned. All structural parts, with the exception of the landing gear wire, motor peg, and propeller shaft, are balsa.

The fuselage is made by laying down two fuselage sides over the plan. The hatching in the side view indicates how the side structural pieces are assembled. When the two sides are dry, remove from the plan and separate them, using half of a single-edge razor blade. Then cement the sides together at the aft end and cement cross braces in place top and bottom working forward to the nose. Add formers 1, 2, and 3, and then add the 3 nose stringers. The nose block is carved from 1/4 inch balsa. Cement a piece of 1/8 balsa to the back of the nose block, after cutting it to fit snugly in the opening at the front of the fuselage structure.

Use 1/8 sheet balsa to cover the bottom of the fuselage, forward of the landing gear. Then carve this to the contours shown in the front and side view. Bend the landing gear wire and cement it in place.

The tail surfaces are built flat over the plan. Tips are made from sheet balsa.

Prepare the parts for covering by sanding all the structure with fine sandpaper; 280 or 320 sandpaper is ideal, but any fine sandpaper will work. Give the outline of the tail surfaces a round cross section, except where the vertical tail will be attached to the fuselage.

The structure should be covered with lightweight tissue. If the tissue has noticeable grain, make sure it goes lengthwise of the part being covered. Water-shrink the covered parts. Then give them a single coat of thin dope.

Generally, it's easier to add insignia, lettering and other decoration, such as moveable surface outlines, while the model is disassembled, so do that job next. Make up the struts and landing gear fairings. The struts should have teardrop stream lined cross-sections and the leading and trailing edges of the fairings should be rounded.

Assemble the model. Make sure it is assembled true to the plans. Then add the windows and windshield.

Either carve a propeller, or select one of the many plastic propellers that are on the market. Bend the prop hook and, using a Peck Polymers thrust bearing, install the propeller on the nose block. Use scrap balsa to simulate the engine cylinders.

A single loop of 1/8 flat rubber will power this model for outdoor flights. For indoors, smaller rubber should be used. Have fun with your Aeronca Defender."

Quote: "Submitted for your consideration (apologies to Rod Serling), Aeronca O-58A/L3A Defender. A Walt Mooney plan as published in the April, 1977 issue of Model Builder magazine; 13 in wingspan, rubber powered. This is similar, in many ways, to Mooney's 27 inch Aeronca Defender (oz4692) plan from 1962. I have taken the liberty of adding the windshield and instrument panel to fit within the plan and corrected Mr Mooney's consistent misspelling of 'monofilament' as 'monofiliment' (I know it's nit-picking, but it nags at me)." 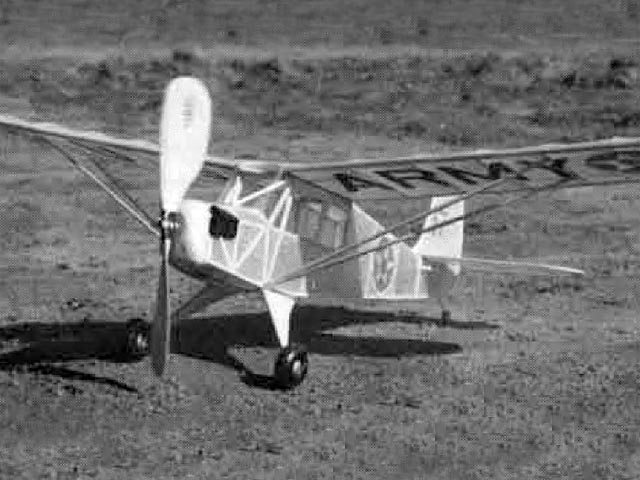