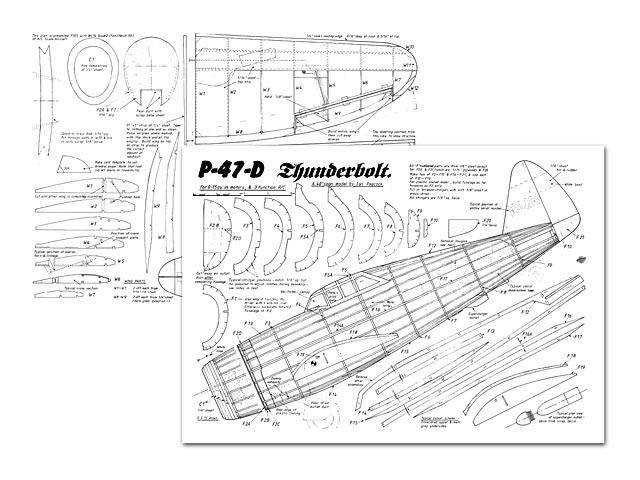 THE BIRTH OF A LEGEND: There is no denying, that in the eyes of many, the legends and the myths that surround such aircraft as the Spitfire and the Mustang cause them to be elevated in our imagination, to the detriment of our feelings and understanding for other aircraft of the period. That there were many other fine fighters to emerge from the conflict of the Second World War seems often to go unnoticed. Just one such an aircraft was the P-47 Thunderbolt.

Conceived, surprisingly, as a lightweight fighter as early as 1940, the P-47 eventually emerged as one of the largest, heaviest, and most expensive fighters to appear during the war. It derived its power from the massive Pratt and Whitney turbo-charged Double Wasp, a twin row radial engine producing in excess of 2,000 horse power, turning a four bladed propeller of just over twelve feet in diameter.

Designer Alexander Kartvelli incorporated all of the lessons learned from the performance and limitations of those fighters already having seen action in Europe. Sometimes it is said it's better to be second in the race, learning from the experience of those that went before. This philosophy was amply borne out with the P-47, which heralded an entirely new concept in single seat military aircraft.

ENTER THE D: Many different variations were built, from the 'A' model, through to the model 'N', but the P-47D is probably the best known, and most modelled. Manufacture of this version took in an additional factory at Evansville Indiana, and assistance from Curtis Wright at Buffalo New York. Total production of the 'D' from the primary, and these two secondary facilities, totalled almost 13,000. During this production, the most noticeable external difference occurred. 'All round vision' for the pilot had been a feature of other aircraft of the period, resulting in a conversion being tried out on a P-47D in the Summer of 1943. This met with great success, and much acclaim from the pilots that tried it. As a result, this modification was immediately incorporated in production, a small dorsal fin later being added to the front of the main fin, to counteract the loss of fuselage side area.

External fuel tanks, increased engine performance, and paddle blade props, all helped to make the P-47, now named Thunderbolt, a formidable fighting machine. From bases in England, and later from France, the 'Jug', as it had become nicknamed, (shortened from 'Juggernaut') could roam far into enemy territory, wreaking the kind of havoc for which it had been designed. One of many successful units to fly the Jug was the 56th fighter group of the American Eighth Airforce.

Much has been written about this aircraft, by many learned aviation historians, including such mind blowing figures as:

In the closing stages of the war in the Pacific, Thunderbolts were flying more than 1,600 sorties, and dropping nearly 550 tons of bombs per day.

It is probably sufficient, here, to say that every pilot that flew the Thunderbolt to the status of 'Ace', survived the war. The members of the 56th fighter group, for instance, chalked up an astonishing kill ratio of 8 victories for every one loss, a highly unusual attainment for any combat aircraft before or since.

MODELLING THE THUNDERBOLT: From the point of view of the modeller, the Thunderbolt is the subject of several kits, and more than one set of drawings. This one may well be considered a little different, in as much of its size and its construction. Regular readers of the wide range of Nexus publications (among others), over the last decade or so, will be aware of my interest in the 'Club Twenty' size of scale model. The Dogfight Double of the Spitfire and Me 109 in RCM&E date back as far as 1977! (still available as plans from Nexus Plans Service.) These models can often be made in one piece, yet still fit easily into the boot of the average car. They are cost effective, both from the building and the operating point of view. They do not need acres of space in which to operate, although to be fair, as one gets a little older, one has to stay upon one's toes in order to keep this size of subject within one's vision.

Structurally, this model departs from my earlier box body/foam wing philosophy, deriving its design instead from the free flight scale models of my youth. (Please don't write in and tell me that they are still about today, I know that. It's just that occasionally it does us all good to return to our yesteryears to remind us of the good things that may well have become forgotten!)

This model, like others before it ,has been scaled from those excellent 1:24 scale drawings in Bill Northrop's book of free flight rubber powered aircraft, entitled Flying Scale Models of WWII (RCL#1119) in which IE Coleman contributed the P-47D Thunderbolt (oz3517) .

PUTTING IT ALL TOGETHER: Because of the slightly different construction, some additional notes may well be in order here, for those readers less familiar with building this way.

As you can see, the tail parts are made from 1/8 balsa sheet. Chose firm, but light, wood, and notice the grain direction. It is important that the tailplane halves, and the anti warp tips are all joined together on a flat board, using thin cyano. Similarly, the fin and rudder parts should also be joined.

There is no provision for a working rudder, the model being quite easily flown on just elevators and ailerons, but rudder control can be simply added if this is your preference. There is no section on the tail parts, simply round off the edges. Take care when making the hinge slots to take the mylar strip, a jig being recommended, as it is all too easy to slip with the knife blade and come through the face of the wood. The wings are best tackled next.

A SIMPLE 42 INCH WING: First of all, make up the washout jig from a 21 in length of 1/4 in sheet, 2 in wide. Plane and sand this to a gradual taper from nothing at one end to the full 1/4 in thickness at the other. This strip is pinned to the plan as shown, the thick end being at the wing tip, and the trailing edge supported upon it during wing construction, to produce the required amount of washout.

Cut the leading edges from medium density, straight grained 1/4 in balsa. The trailing edge and tip parts (W8 to W12) can be cut from the same sheet. Assemble W8 through to W12 first, before starting to build the wing structure. Like the tail, use thin cyano, and work on a flat board. All of the ribs are cut from 1/16 quarter grain balsa, (two of each), not forgetting the extra riblets that form each end of the ailerons.

Now you can commence construction. Pin the assembled trailing edge in place over the washout jig add the ribs and the leading edge. Note that the root rib, W1, leans in towards the wing tip, the exact angle being set by the template given on the drawing. All spars are from hard, straight grained 1/8 in square balsa. Fit only the top spars at this juncture, followed by the bellcrank and it's support platform..."

Quote: "Hi Mary and Steve, I couldn't see this version of the much-modelled P47 in OZ so I've attached a copy of the P47 Thunderbolt plan that appeared in the R/C Scale Modeller magazine Volume 14 Issue 2. Hopefully it's of interest to OZ.

Designed by Ian Peacock with a 42 inches wing span, it's a scaled-up rubber powered scale model. It's such a great thing to be able to use OZ to trace the original from the reference in the article; I believe the attached model has its origin in oz 3517. The attached article acknowledges the original designer of the rubber-powered model in Flying Scale Models of WW II as IE Coleman.

Ian Peacock's version is intended for a 0.15 cu in size motor. The minor bendy edges amongst the fuselage stringers that appeared in the fuselage plan are reproduced on the scan. I didn't think they would deter anyone from building this attractive looking model.
Hope you are keeping well and, once again, many thanks for OZ. 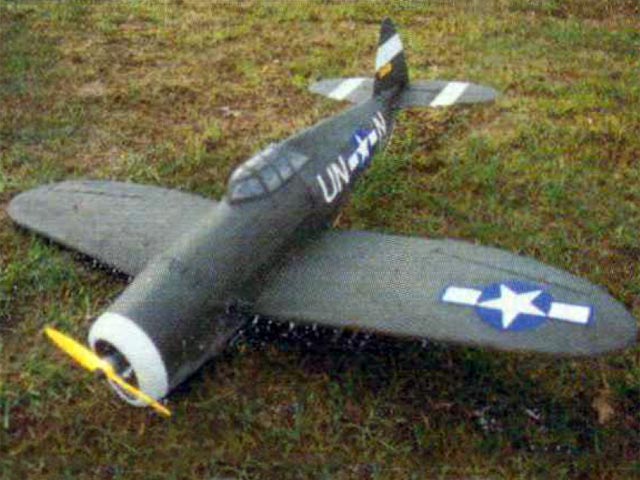