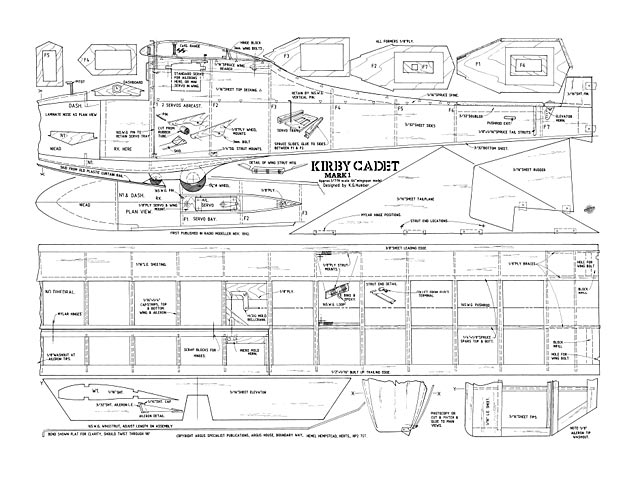 The Slingsby Type 7 Kirby Cadet was designed and built by Slingsby in 1935-1936 for use as an intermediate training glider with some soaring possibilities. As a model its simple lines are eminently suitable, as your editor was quick to point out when we were chatting over the phone deciding what next mini-Slingsby it would be!

So Alec, herewith the Cadet. The construction is pretty straightforward and follows the full-size in most points. The areas are scale as near as one can be but rib spacings and control horns, etc, are made as model practice. (You could of course dress the model up to full class 1 scale if you so wished). The colour scheme shown is copied off Slingsby's original painting drawing (one off which survived the fire) though I have taken licence with the serial lettering. The drawing came courtesy of fellow club member Colin Rann - thanks again Colin.

Flying wise she is OK but not quite as good as my little Mini Eagle (oz164), still quite realistic; she tends to wander about a bit rather like the full-size, I suppose the small fin area is the culprit, however it certainly looks the part in the air. Loops and stall turns, spins, etc., are quite possible but light air performance is a bit marginal - she is happier in a force 3-4!

Construction: A quick resume of the more triclty bits is called for, The basic fuselage is straightforward but if you want to use a full length Action Man pilot then the elevator and rudder servos will have to be fixed to a plate mounted in a grooved spruce slide glued to fuselage sides rather like a sliding servo mixer mounting but retained with a 16 swg vertical pin, The pin is withdrawn to allow the servos to be slid out into the cockpit for access and service (the simpler way would be to mount them in the cockpit and just use a head and shoulders pilot).

The aileron servo also is a bit unconventional; it is mounted in the top of the fuselage on 1/8in ply combined wing mount bolt and servo plates. The aileron pushrod has a right-angled pin soldered on it to engage in the servo output disc. It works OK but is a bit fiddly setting if up. I used standard servos so anyone using minis would put the servo in the wing conventionally.

The wing struts are 16 swg wire with 1/4 x 3/32 in balsa fairing epoxied into position shaped to streamline streamline. They are fixed permanently to the fuselage by binding with thread and gluing to 1/4in x 1/4in balsa cross-fuselage mountings.

However, the lengths on the plan suit my own model and may have to be adjusted to your own machine. It is critical for length - too tight could give anhedral; too long vice versa; or different lengths, the dreaded warps.

The struts are connected to the wings with 90 degree bends on the strut passing through 16swg wire eyes mounted in the wing retained with collets made from electrical wire connectors. The scheme scheme works well in practice and is cheap. The skid is cut from old curtain track, however, two layers of thin ply would do equally well. The coupling is a part of 3mm Rawlplug toggle bolt with two small holes drilled in it to enable it to he wired to the skid. The rubber shock absorber was cut from a piece of thick-walled rubber tube trimmed to size retained with bent pins through the 1/8 ply wheel mounts. I have shown the sequence on the drawing.

The wing is really straightforward being flat with no dihedral and joined with well glued braces at the centre line. Build it framed up over the plan with the.ailerons in situ, cutting them out at the end of wing construction, capped them top and bottom allowing for aileron movement. When cutting them out I faced the LE with 3/32 balsa and fixed in balsa blocks to accept the mylar-tape hinges.

The horn is a Micro Mold type fixed to a small 1/8 ply plate let in and glued to the underside of aileron. The strut mounts were bent up out of 16 swg wire bound and glued to 1/8 ply glued into position in the wing with epory.

The tail group is from 3/16 in sheet balsa planed and sanded to section, hinged with mylar and glued into position. Tail struts are 1/8 x 1/16 spruce glued into position after covering. Rudder and ailerons are coupled with a Y lead. My model was covered in Solartex and sprayed with Halford's Toyota No.2 Silver which I think is a good representation of the original silver dope.

In flying trim, the prototype carried about 2 z of nose weight so try to keep the rear end light - don't fly tail heavy. Pick a wind of about force 3, heave off, and be prepared for the slight directional wandering. I think you will enjoy - I must admit I do! So happy flights and landings. Finally, thanks to John Stagg for the launch photo." 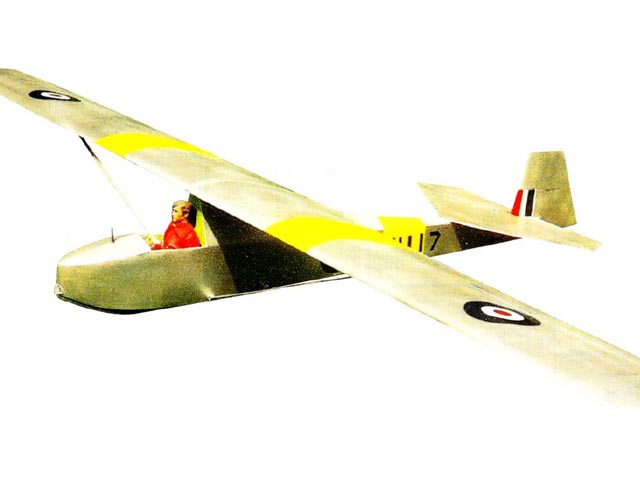