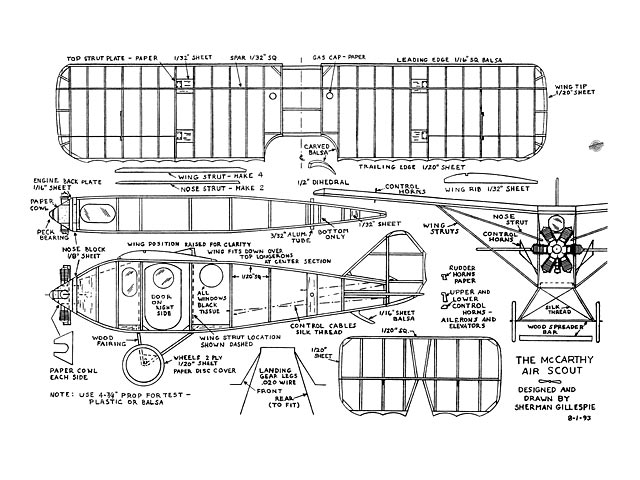 Quote: "The author has been researching this obscure 1925 lightplane since 1977 time well spent, as can be seen in the photos of the finished product. McCarthy Air Scout, by Sherman Gillespie.

The McCarthy Air Scout was described in the March 31,1927 issue of Flight magazine as an 'American two-seater enclosed light plane.' The first and apparently only product of the McCarthy Aeronautical Engineering Company of Detroit, Michigan, it was first test flown in January, 1925. Power was a 45-horsepower Anzani, and the aircraft was claimed to have a top speed of 120 mph at a gross weight of 1020 pounds. Flown continuously during the fall and winter of 1925-26, it was said to be strongly constructed, safe to fly, and especially suited for advertising and private flying. With its clean lines and six-cylinder engine it makes a charming Peanut Scale subject for modelers looking for a rarity from the Golden Age of aviation.

CONSTRUCTION: The model shown was designed for indoor flying, so 'keep it light' is the key suggestion. Target weight was 8 grams. The completed, covered airframe came out at 6.7 grams less the engine/prop assembly.

Construction follows conventional practice with only a few points to be mentioned. The longerons must be soaked in water until they will bend easily around a sheet balsa form for the curved nose section. Allow ampledrying time with the strips pinned to the board. All sheet fill or support points in the fuselage are cut from 1/20 sheet stock to match the basic structure, except for the 1/32 sheet tail skid anchor spot. Use care laying out and gluing the sticks that form the slot for the stabilizer, so as to insure square alignment and zero stab incidence. When joining the fuselage sides, be sure to maintain the square construction through the cabin section. Accuracy here is very important when final mounting the wing.

The wire landing gear is sandwiched in place with 1/32 sheet balsa. The fairings and spreader bar are made from basswood, which carves and sands beautifully. Wheels are made from cross-grained laminations of medium-hard 1/20 sheet balsa with 1/8-inch brass washers as hubs, cemented on after the pre-painted paper wheel covers are in place. The full-scale Scout had wire wheels with fabric covering.

The stabilizer and rudder are made from light 1/20 balsa. The trailing edges on all surfaces on the original aircraft were cable, hence the scallops. Both the stab and rudder were of extremely thick symmetrical sections but were designed flat for a model this small to avoid adjustment problems.

The wing ribs, which are scale in number, are cut from well-sanded 1/32 sheet. The cable trailing edges can be effectively represented by slicing a 1/4-inch wide strip of balsa, cutting the scallops, and trimming the piece to the correct width. Position the panels on the plan and block up the tips for the dihedral. Cement the trimmed center section ribs in place and add the leading edge and spar pieces and the curved cutout parts..." 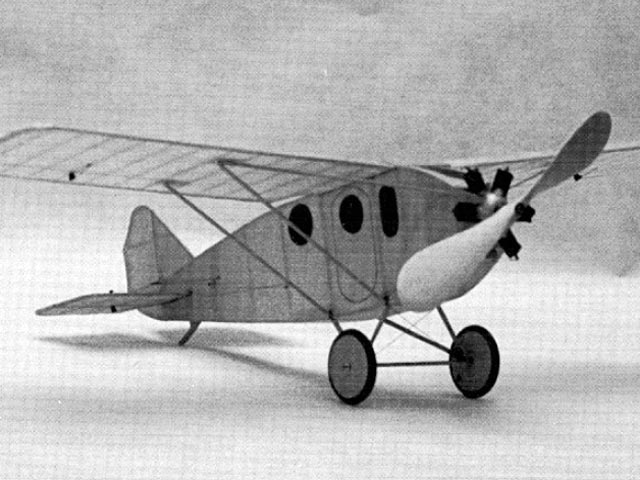