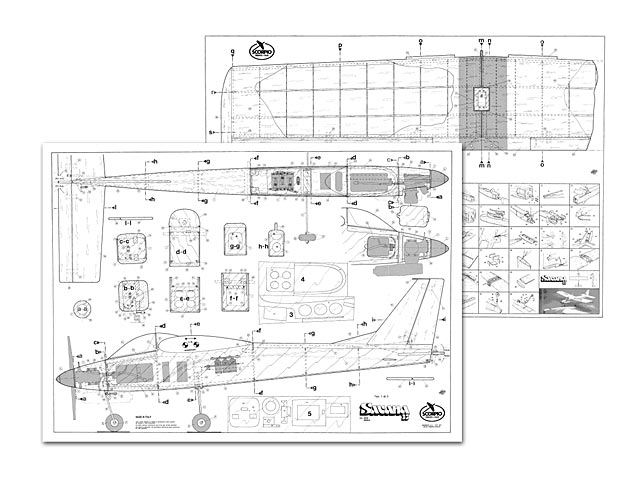 Plan sheet #2 shows assembly instructions as a sequence of 26 small line-art drawings. It looks like the fuselage and wings essentially arrived ready-made, in the box.

The Savana 35 is an attractive shoulder wing design manufactured by the Italian company Scorpio and distributed in the UK by MacGregor Industries.

On opening the box at first glance it is almost like being greeted by a fait accomplis, as many of the main structures and components are already assembled. However, it soon becomes apparent that there is ample work left for the modeller who enjoys his building. The main fuselage comes pre-assembled and glued with its plywood side walls and formers requiring the balsa blocks to be fixed top and bottom for the tank compartment and to the top of the rear fuselage, providing a strong yet fairly light structure.

The instructions are good and a very detailed plan showing all the numbered parts is clear and concise. To further aid the builder there are a series of simple step by step illustrations which indeed make the Savana a pleasure to build.

Perhaps the most unique feature of the model is the fact that its wings come ready constructed. Ah! you may think, many kits today come with ready veneered foam wings, but that's where the Savana differs, for while the wings are already constructed, they are built up using conventional ribs, spars and then balsa sheeted with the tips from sanded block. The wings are then joined using a central ply rib and having had the centre box cut away to allow the positioning of the aileron servo. The rest is really straightforward - the ailerons are controlled by torque rods via tubes set into the trailing edge and then the centre section is reinforced using glass fibre bandage. At this stage it is as well to remember that it is a shoulder wing model where an unslightly or heavily resined bandage would detract from the overall appearance and to provide the necessary strength only a very small amount of resin need be applied.

The Savana really did slot together well with excellent quality wood having been well prepared and cut, providing no problems at all. It was found that building the kit was not only fast and straightforward but also an enjoyable experience. The whole model was then sanded and given a coat of Balsarite. This provides a good base for the covering material, which in this case was heat shrink fabric.

In flight: During the latter part of the building a small niggling doubt had existed. It had been decided to use a four-stroke and having looked at the two available at the time, an OS 60 which when measured up to the model was far too large, and an Enya 40 FS which had slotted into the engine compartment and fitted like a glove. The only problem was would it be under-powered? The Savana spans almost 63 inches and with its ply reinforced fuselage and strong construction might prove to be a little weighty for the Enya but with the model built, the engine and radio installed, it was too late to change the engine now.

Given the choice a much nicer day would have been chosen for first flights. Instead there was a little sun and a blustery, cold wind. On arrival at the flying field the Savana was quick to attract some admiring glances and also one or two sceptical comments similar to our own of would the Enya be man enough for the job. The engine was started and was quickly adjusted to provide a good, reliable tick-over and a smooth top end. Once again, time to check all the control throws for direction (the CG had been checked again earlier). The throttle was opened gently and the Savana accelerated surprisingly quickly on its tricycle undercarriage across the mown grass strip. After about 30 yards it was gently rotated and the model climbed away requiring hardly any alteration to the trim.

All fears about whether the motor would be powerful enough were totally unfounded as the Savana had ample power to perform all the required manoeuvres without problem. Despite the wind, the cold and the rapidly approaching Sunday closing time, another tank full of fuel was run through the Enya which, with the Savana, proved to be a most delightful airplane to fly. The landings were gentle and with no unpleasant characteristics. Slow, low passes were great with the model under perfect control all the time (just wait for the club limbo contest this year), the motor never missing a beat and picking up well to pull the model back up in the sky at a good 40 climb.

The Scorpio Savana must be rated as an excellent all-rounder. It has no vices, is fun to build and should be attractive to the less experienced while at the same time providing the regular flier with a fun model that is both durable, quick and simple to assemble at the flying field and offering a good flight performance using one of the .40 - .49 four-strokes which are becoming so popular. Priced at £55.13 the Savana is part of the Scorpio range of kits and are distributed by MacGregor Industries Limited." 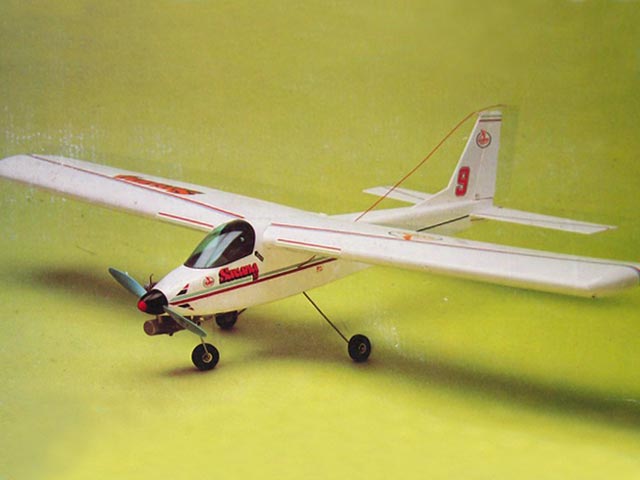 Attached photos of Savana box [model photo & more pics 004-006]. Please note the antistall device in the leading edge central wing portion. In reality it's a "stall device", it serves to make the central portion of the wing stall before the wing tips and have a soft landing. Same devices are on the real Dornier 335 push-pull fighter. Fiesta and Savana are sister ships, Fiesta low wing design with the same Savana wing.
Pit - 28/05/2020
Add a comment