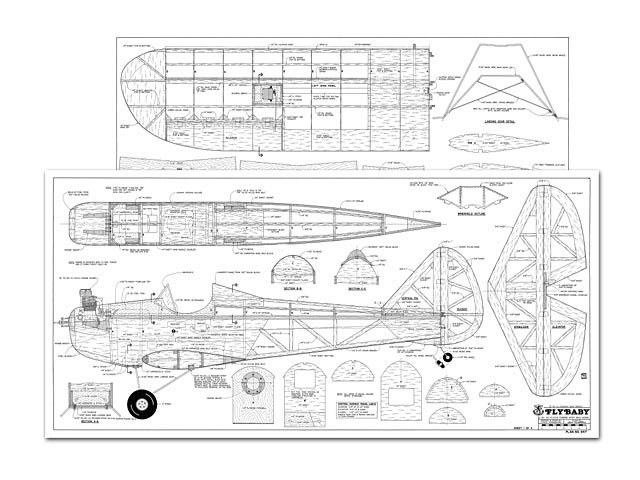 Quote: "The Flybaby design lends itself to the modeling world just about as easily as any full size aircraft can. There is no reason why it should not, since the original aircraft was designed by Pete Bowers back in the late fifties. Pete was a model builder prior to his interest in designing and constructing experimental aircrait; even today he probably still is a model builder. Somewhere lost in my files is a Bowers design Fly Baby (oz1537) that was published way, way back in the dark ages [1945]. I can’t recall if it was a free flight or a ukie [FF], but when he set about designing his classic experimental single place full size monoplane he logically named it the Flybaby also. Several years ago RCM presented a fine 72 in span Fly Baby (oz5837) along with a set of floats (RCM plan #801).

When I purchased an OS 1.2 engine I cast about thinking of something to design that would be scale-like, look good, fly great, be easy to build, and would be the perfect mate for the larger 4-stroke engines. Since I had done the Turbulent series in just about every size, it seemed logical to turn to the Flybaby. About five years ago I had designed one for my Quadra, having a wingspan of 8 ft. I liked it, so I decided that a 7 ft Flybaby would be just the ticket for the 1.2.

The finished model, sporting its covering of MonoKote, tips the scale at 10 lb. With a wing area of just about 1100 square inches, the wing loading is a very fine 21 ounces per square foot. This airplane can fly both on the engine and the wing. If you have a .90 4-stroke, it will pull it and, as a matter of fact, if you want to stick a .61 2-stroke engine in the nose, the weight will be about 9 lb, and will be very flyable. Naturally, you can also cram a .90 or 1.08 2-stroke up front since the airframe structure is plenty strong for just about any power.

This Flybaby is also suitable for any Quarter Scale event since the wingspan ofthe full size aircraft is 28 ft. The model is not a full blown scale replica. It is a Stand-Off Scale type model that has been intended to be a fine flying aircraft that looks like its full scale counterpart. The airfoil is the 20% thick symmetrical section that I have used with great success on the entire Turbulent series (from 5 ft span through 8 ft span), on the very acrobatic Hooker (oz5985), and the smooth flying boat A-Hoy (oz8003). I like the way models fly with this wing. The horizontal stab is not a slightly lifting section this time, but it is pretty thick, and the landing characteristics of the Flybaby are really super.

If you’re planning to use an engine other than the 1.2 or .90 4-stroke, you can do this simply by moving the firewall further forward. The 4-strokers are about 1-1/2 in longer than the 2-strokers, but measure your engine on the mount, and locate the firewall accordingly.

Better get out the wood pile and get started chopping up bits and pieces. You will be glad that you built a Flybaby - it's an enjoyable airplane to own and to fly.

CONSTRUCTION: Wing: Construct the wing first so that when it comes time to mate it to the fuselage you will be able to do so, and go on with the fuselage construction. Select very hard balsa for the wing spars, and medium hard balsa for the leading edge. Cut the wing ribs from medium hard sheet balsa. Note that there are two sizes of wing ribs. A more narrow rib for the center section as this area is covered by 3/32 sheet balsa, and wider ribs for all ofthe rest. Cut out all ofthe B ribs the same, then make the minor adjustments that are needed for the ribs at the tip due to the elliptical wing planform.

When all of the ribs are cut out and sanded, make sure that you mark the top of each rib so that it does not get placed in the wing bottom side up. Drill 3/4 in hole in ribs at this time. See wing plan for location. Next, cover the plans with waxpaper and pin the lower main spar in place over the plans. Pin down the aft spar just in front ofthe spar location on the plans. This will serve to position the ribs correctly as you’re building the wing panel. Glue all of the ribs in place on the main spar, using Hot Stuff Super T or similar CA adhesive. Next glue the top spar in place, cut all ofthe webbing and glue this in place. An even quicker method is to cut all of the webbing pieces first, glue in the center section ribs, then when you get out past the location of the dihedral brace, add a rib, glue in the webbing, add a rib, webbing, rib, webbing, and so on, working toward the tip. Then add the top main spar. Whichever method you choose is okay. Next, glue in the other top spars and the trailing edge sheeting. Add the wing tip pieces, making sure that they are centered on the ribs. Do not cut out for ailerons yet.

The 3/4 in hole you drilled in the wing ribs istoaccepta small tube, rolled out of typing paper or other lightweight material, held together with Scotch Tape orglue. As you remove each wing half from the building board, slip this tube into position and hold in place with glue. This is the path for the aileron servo extension cords to run. It’s a lot easier if you do this now rather than later..."

Note this plan is derived from the (cropped) raw scans posted by drube on RCuniverse at https://www.rcuniverse.com/forum/11658586-post8.html in 2013. Thanks to Denis for the link. The raw scans were aligned and cleaned up of dirt and noise, then the missing sections at the top of both pages were restored (recreated) using image scans from https://pulling-gz.blogspot.com/201.... 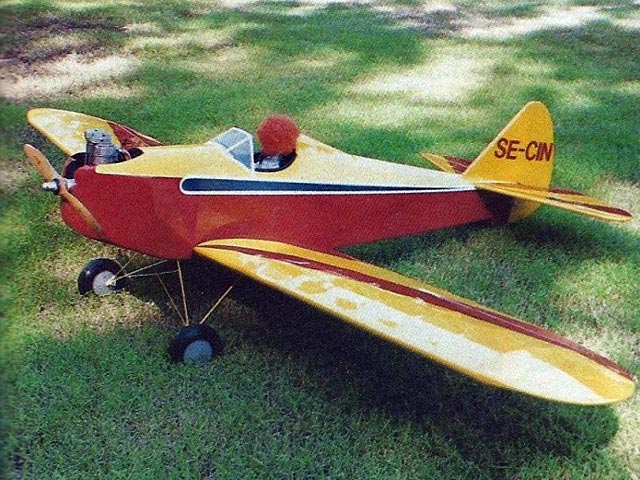