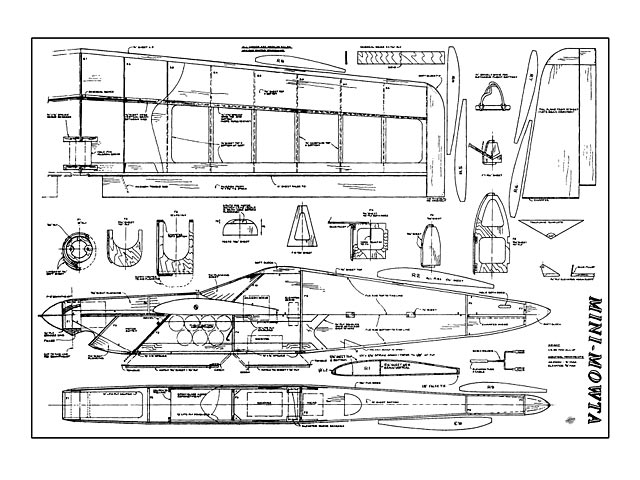 Quote: "A one metre span sports aerobatic model with aileron, elevator and motor control that is very simple to build. It is nearly all balsa and there are no awkward bends in it. You can use economy motors and economy radio gear, it's the right size. If you have mastered rudder/elevator models and want to try ailerons, this could be the one. If you are on to aileron models and wish to fly aerobatics, this is an good first aerobatic model. Robust enough to last. Light enough to bounce.

Mowta history: Electric flight came as a real godsend to me. My first love (in aeromodelling terms) is slope soaring but on the windless days I needed something to tide me over. I tried IC power but could not get on with the mess that went with it.

In about 1984 I acquired an MFA Olympus unit and built myself a 6 foot wing span powered glider to go with it. This was quite successful, I even used it to carry a camera aloft for aerial photographs. I wanted something a bit more aerobatic though, and I soon started to think about using electric power in a smaller, sports acrobatic model to provide a similar flying style to my slope soaring antics. A couple of models later and I built the prototype to the model you see here.

The prototype used the Olympus unit in the first few flights but I adapted it and tried a direct drive Graupner Speed 600 motor in it. I was so impressed with the way it performed with direct drive I built the version you see here specifically for direct drive.

On this model I concentrated on keeping the weight down. This involved a built up wing, balsa planking for the curved bits, and a one piece model. I even arranged for the batteries to be ejected in a heavy landing so that reinforcement weight could be kept to a minimum.

With the new version finished and flying well I started to experiment with power, battery, and prop combinations. I finally settled on a Graupner Speed 600 8.4V along with a Graupner 8 x 4.5 inch folding prop and 7 Sanyo 1.4 Ahr cells. This set up gives a decent thrust for aerobatics. The same motor and battery with a cut down folding prop of 7 x 4.5 gives a slightly faster flying speed but I prefer the aerobatic flying.

Construction: This one piece model with built up wings was designed for minimum weight and easy transportation. Construction is mainly of 3/32 and 1/16 sheet, with a small amount of liteply, birch-ply and spruce.

You will need a perfectly flat building board to avoid building in warps. The building sequence needs to be as follows: Wings, tailplane, then fuselage. Use PVA glue sparingly, use cyano as much as possible.

Wings:
1. Cut out ribs from 1/16 quarter grain sheet. Use the sandwich method or photocopy the ones on the plan and with the photocopy face down on balsa sheet, transfer the image with a hot smoothing iron or heat sealing tool. Top and bottom spars to the sheeting and leave to dry.
3. Pin bottom sheeting, cap strips and false TE to the board. Prop up the LE sheet with scrap balsa.
4 Make dihedral brace from laminated 1/32 birch ply. Remember to build in the bend at the centre line.
5 Glue the ribs in place starting from the root in the following sequence: dihedral brace, R1, vertical web, R2, vertical web, etc until you reach the tip.
6. Glue the aileron servo bearers in place and glue the top sheeting and top cap strips in place.
7. When dry remove from the board and carefully sand the front flush and glue the leading edge in place. Pin back on the board to dry overnight.
8. Now graft the other wing on to the dihedral brace and servo bearers by repeating the above for the other wing. Use the reverse of the plan to build the second wing. Make sure the two wings always line up (have the same incidence) throughout the building of the second wing.
9. Make up the ailerons and torque rods and fit to the wings and add the tip blocks to the wings then sand down ready for fitting to the fuselage..." 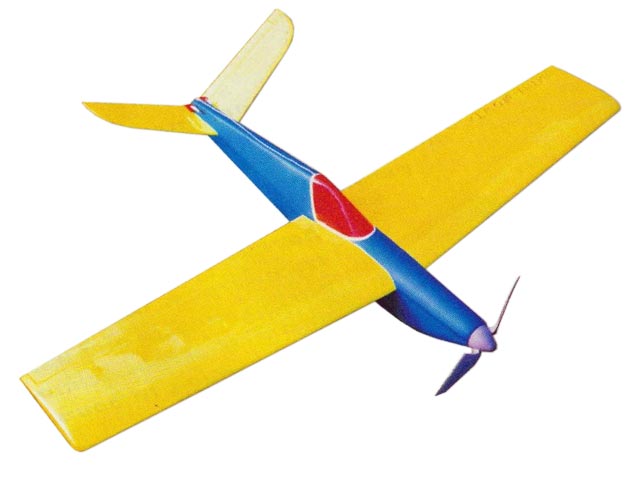