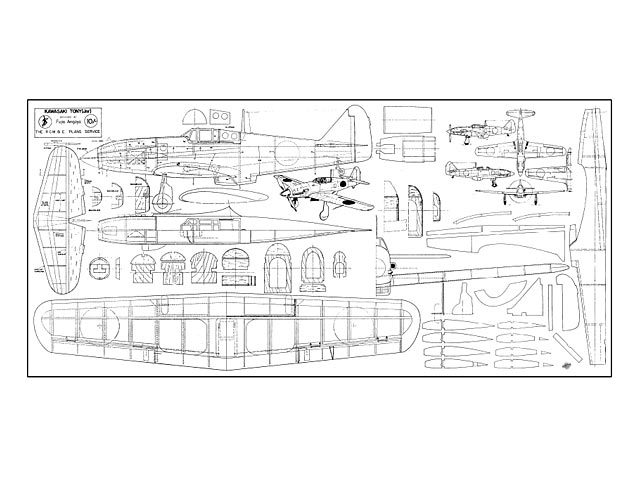 But why should the multi boys have it all their own way? Why not a smaller version for single channel? Low wings don't have the stability of the high wing machines, you say. True. But are they really so unstable as to be useless for single channel?

Obviously Japanese R/C modellers do not think so, for single channel R/C fiyers out there tackle a range of seemingly improbable subjects for one button R/C, including Mustang, Zero, Raiden, Ju 87, etc. They also have a habit of scaling down the big, low multi jobs to suit their own equipment and engine sizes as evidenced by Mr Suzuki’s Lucky, which appeared in Feb’s Single Channel Charter.

The control system on these exciting little machines invariably involves coupled aileron and- rudder control, usually with throttle control, and often kick-up elevator thrown in to boot. These controls are actuated from any of the many single channel motorised actuators so popular among single channel R/C enthusiasts in Japan.

In Great Britain, aileron control for single channel has not, as yet, caught on to any great degree. Single channel flyers here tend to cling to the high wing, rudder only layout. It’s time we broke out of the rut chaps! Fujio Arigaya is a prolific builder of R/C models, and what’s more, he’s a confirmed single channel man. His 46-1/2 inch Cessna 172E (oz10297) which appeared in Aero Modeller has been a top seller and his Junkers Ju 87D Stuka (oz20), another Aero Modeller introduction, is also in continual demand.

Fujio's Tony is not exactly to scale, but is near enough to capture the exciting air of the full size machine. Generous fuselage side area of this aircraft helps to make the model stable. As might be expected, the tailplane is oversize for better longitudinal stability, and the wings have come in for some re-shaping, having wider chord at the wing tips. This, together with the resultant thicker wing section, reduces any tendency to drop a wing tip violently in a turn, which could of course be disastrous with the limited control available, if the sharp taper of the full size were used. Wing dihedral angle as per the full size helps to maintain the air of realism.

Choice of control system is not critical. Fujio Arigaya’s prototype used Japanese KO motorised actuators and a KO .10 motor. We have shown OS servos on our drawings, and an OS 10 motor, which of course is one of the more pokey 1.5 cc power plants and should provide a spritely performance.

Actually, Fujio’s Tony has also been published in the Japanese R/C magazine Radio Control Technique, where it was shown with escapement operated rudder control rather than ailerons, so if you are good on the button and don’t fancy the coupled aileron and rudder set-up, simple rudder control may suit you best.

Construction: The airframe is obviously more complicated than the normal, boxy single channel model. However, if you study the plan you will see that construction is not as complicated as first glance might suggest.

Fuselage assembly should commence with the nose section, by assembling formers 1, 2, 3 and 4 onto the hardwood engine bearer. Allow to dry and then add the two piece No. 17 onto the rear of the bearers. We then add formers 5 and 6, which complete the basic framework.

Onto this we then cement the fuselage sides adding formers 7 and 8 and drawing the sides together at the tailpost. From here, the rest of the structure is added, but before continuing. it is a good idea to at least plan the radio installation so as to avoid possible embarrassment later on.

The two wing halves should be built flat on the board, over the plan, laying down wing ribs over bottom mainspar. Add top mainspar and build up the trailing edge, cementing in place top and bottom sheets, building in the ailerons and linkage. Make very certain that the aileron linkages are extremely free so that the servo will not become overloaded. Add the leading edge strips but not the front parts of wing ribs 1-4. Cement in place leading edge and centre section sheeting

Leave to set. Then, part the two wing halves and re-join to the correct dihedral angle To do this, set the root of each wing half against the edge of the building board, packed at the wing tip Then bevel the sheet covering by running a sanding block vertically along the edge of the board The two wing halves are now re-joined, using the ply under carriage spar (complete with undercarriage legs bound in place), which cements on the front of the mainspars and sets the dihedral angle The front pieces of formers 1-4 are now added and the under side leading edge sheet added and wing tips built on

Finish: Scale finish will be a matter of personal preference. Fujio Arigaya’s prototypes were finished in natural metal with black anti-dazzle patch and national insignia, or in dark green camouflage with light grey undersurfaces.

More details of scale finishes can be found in Profile Publication No.118. Completed your Tony should weigh 2 to 2-1/4 lbs, so select your wood care fully and don’t overdo it with the finish. Good luck." 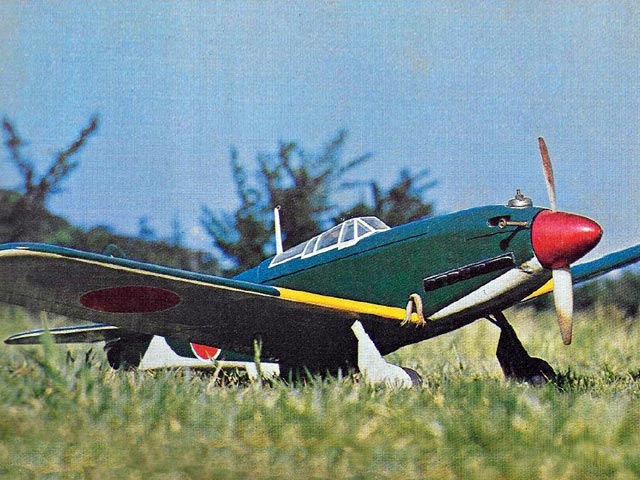