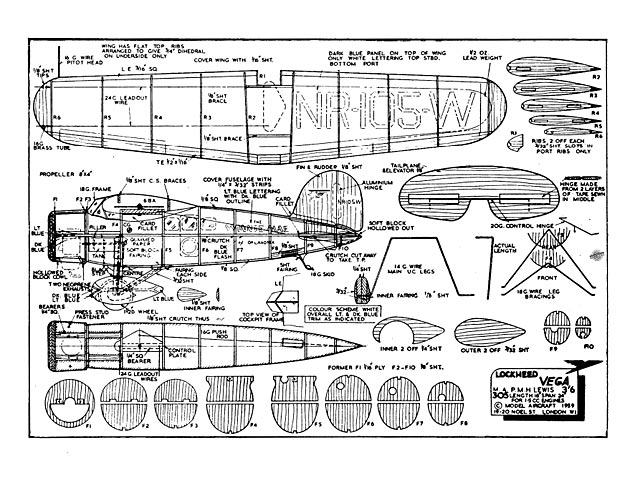 Quote: "Use these notes on building the "WINNIE MAE in conjunction with the sectioned drawing on the opposite page. THE pioneering days of the 'twenties and the 'thirties were the times of many fine long-distance flights made by widely-differing types of aircraft, and certainly one of the most famous of these flights was that made by the Winnie Mae.

FC Hall, the sponsor of both of the Around the World epics, owned at various times three different Vegas, each named in honour of his daughter, Mrs Winnie Mae Fain. It was NR105W, the second of these, which was used by Hall's pilot, Wiley Post, to encircle the globe on two occasions. During the first flight, which took place between June 23rd and July 2nd, 1931, and occupied 8 days, 15 hours and 51 minutes, he was accompanied by Harold Gatty as navigator. On the second world flight, made in 7 days, 18 hours and 49 minutes, from July 15th to 22nd, 1933, Post flew alone. After further spectacular high-altitude flights, the Winnie Mae was retired for exhibition in the Smithsonian Institute.

The full-size machine went through several airframe modifications and changes of markings during its flying life and the plan shows it as it appeared during the world flight by Post and Gatty.

Lockheed's wooden wonder first built in 1927, gave the company its real start in the production of rugged, dependable aircraft, and the Vega’s lines transform into a model as handsome as the full-size original.

Fuselage: The crutch outline is traced onto hard 1/8 sheet, together with the positions of the formers. The crutch is then cut out and the 1/4 in sq hardwood engine bearers are cemented firmly in place. Fourteen gauge wire isused to shape the main undercarriage legs X, and they are sewn and glued to the underside of the crutch.

Formers F2 to F10 may be added next from 1/8 sheet, followed by the 1/4 sq hardwood bearer, to which the control plate is secured with a 6 BA nut and bolt. Eighteen gauge wire comprises the undercarriage legs Y and Z, sewn to formers F4 and F5 and soldered to the main axles. The fuel tank fits between F3 and F4 behind the engine cowling, with the filler through the fuselage’s port side. Eighteen gauge wire forms the tailskid, bound and cemented to its 1/8 sheet mounting. The under-surface of the crutch is carefully trimmed away to take the 1/8 sheet tailplane, and the fin follows in place above.

When the 1/8 sq. upper and lower outline stringers have been added, the fuselage is ready for sheeting over. Medium 1/4 x 3/32 strips are used, working alternately from one side to the other to avoid any twisting, until the half above the centre line is complete. Covering of the lower part then follows: 1/16 plywood F1 is pinned and glued to the front of the bearers and faced with a ring of 1/8 sheet laminations. Hollowed-out soft block is used to fill in the engine cowling, the lower section of which is retained with press fasteners. Fairing of the undercarriage legs is carried out with 3/32 sheet cut to the different widths shown for each pair and glued on.

The entire fuselage is now sanded until it is smooth, after which the elevators are cut out and then cemented to the tailplane's tape hinges. Control of elevator movement is through the 20G wire bar, the ends of which are pressed and cemented into the surfaces. The addition of the 16G wire pushrod completes the fuselage installations and the tail is then finished by fitting the soft block ends.

Make certain that the controls move freely and without interference. The attachment of the rudder to its thin aluminium hinge is made next.

Wings: Leading edge, 3/16 sq, and trailing edge, 1/2 x 1/16, are pinned down on the plan and to them are cemented ribs R1 to R6, cut from 3/32 sheet. The port set are slotted for the lead-out wires; the starboard tip contains the balange weight.

When firm, the framework is lifted from the plan and the top surface covered with 1/16 sheet; 3/4 in dihedral is incorporated on the lower surface by bending at the centre point until the upper surface is in a straight line.

The starboard under-surface is now sheeted over, but before sheeting the port side, either pass thread through the lead-out slots for drawing the 24G wires through once the wing is in place, or install the wires themselves, securing them until they can be connected up to the control plate. The centre-section receives two 1/8 sheet cross braces as shown and, after sanding and the connection of the wires, the wing is cemented firmly in place on the fuselage.

Undercarriage: 1/8 sheet inner spat fairings are mounted on the main axles and glued well to the legs. Each spat is made from two 1/4 in inner laminations and from two outer ones of 3/32 sheet. After shaping and mounting, the outside lamination of each is prised away and the wheels are added. The cover is then replaced.

Finishing: Sanding and sealing the model prepares it for the doping on of the tissue covering. Coats of clear and coloured dope are then added, with rubbing down between them until the finish is quite smooth.

The Winnie Mae's overall finish was white. The upper surface of the wing had a broad panel of dark blue inset on it. Fuselage and spat flashes also were dark blue, bordering light blue panels on the cowling and each end of the spats. Lettering was dark blue with the fuselage 'Winnie Mae' picked out in light blue. Wiley Post’s and Harold Gatty’s names appeared below the cockpit. Fuselage lettering consisted of: F. C. HALL - SPONSOR - AROUND THE WORLD FLIGHT and THE WINNIE MAE OF OKLAHOMA. On each side of the fuselage was the Pathé cock device, encircled by PATHE NEWS WINNIE MAE ROUND THE WORLD FLIGHT.

Details: The model is completed by the addition of the 18G wire cockpit framework and the celluloid windshield and windows and, finally, the 16G wire pitot head on the port leading edge. " 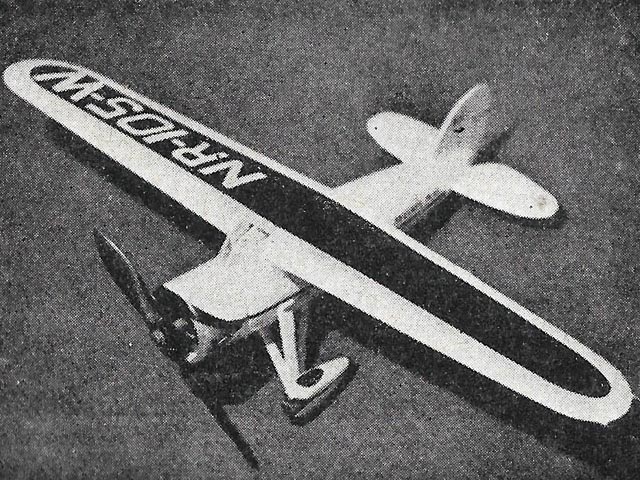