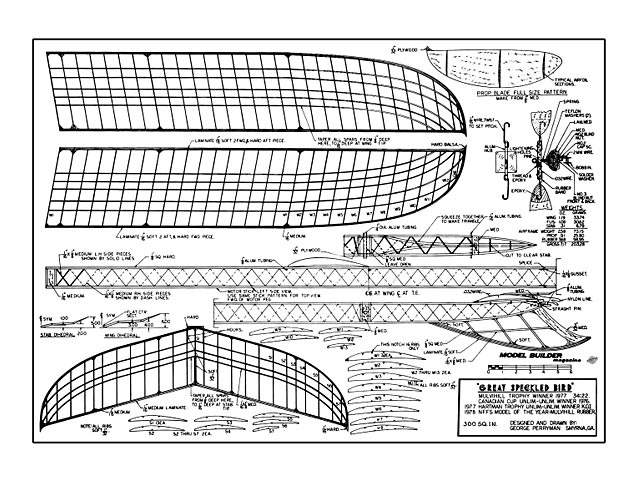 Quote: "Any keen observer of rubber powered competition aircraft could tell you this plane's designer without a second glance, but this one has a little more - the coveted Mulvihil Trophy!

The 'Great Speckled Bird', with its gull wing, isn't exactly a new idea, since seagulls have flown pretty well with this configuration for several hundred million years. In the contest region where I fly, Unlimited (now Mulvihill), rubber was flown with category II rules, with as many 3 min flights as one could make, determining the winner. This method was followed at the Nats until recent years, when after making 3 each 3 min flights, progressive 1 min. increments were added: 4 min, 5 min, etc. With this increased flight time, design philosophy had to change. Now, instead of making a durable and reasonably good model, it put a premium on lighter, large (300 sq in) wing ships. Large, light ships fly better and remain in sight longer, so this seems the way to go.

Some designers follow the old saying of a little bit is good, so naturally a whole heap is better, when deciding how much rubber to use. I have tried both extremes, between too much rubber, and not quite enough. About 20 years ago, I had a big 300 sq in job named the 'Kluge'", which turned out to be aptly named. The fuselage was a full 7 feet long, and carried 24 strands of 1/4 inch rubber, 64 inches long, which weighed over 8 oz. The one advantage I found with this great chunk of rubber was that I never broke a motor. My winding arm gave out long before the rubber expired. If I could have gotten AMA to let me use King Kong as proxy winder for me, I might have won the Mulvihill Trophy long ago!

On the other extreme, I built a lightweight 300 sq. in. ship, 'Practically Nothing', with sliced, hollow, 1/32 ribs, condenser paper covering, and an all-up weight of 2-1/2 oz, including rubber. The prop would run about 7 min and this looked like the way to go for calm air contests. There always seems to be a hooker in all our best laid plans. How do you DT one of those things down? Until a few years ago, AMA rules only permitted one model, and when you lost your gum band ship, the contest was over for you, so this effort was not successful either.

Frank Zaic included both these models in his yearbooks, since he was probably hard up for material at the time.

I have tried many design approaches during the past 40 years, and am still searching for the 'optimum' ship. Due to variability of weather and available rubber, there may not be such a thing as optimum. The long, skinny, light model is probably best in light wind flying conditions, but in windy weather flying, with perhaps rain (and dust devils) a more durable ship is re-quired. A case in point is my old 1940 Lanzo stick which I've flown for the past 2 contest seasons, as old-timer rubber and in Unlimited events. Some models are just 'luckier' than others, this I believe. The Lanzo won 14 straight contests, 8 in OT and 6 in Unlimited. This was against some pretty tough competition, including Jim Lewis, and any of you who have flown against Jim, know what I've been up against. Jim is an amazing flier, and when you beat him, you've usually won the contest. I feel as though he's one of my sons, but we would rather beat each other than anyone. A shorter fuselage model, with firmer wood all over, is certainly easier to keep intact in rough weather, and bad retrieval terrain. Anyway, I'd rather have a clunker in a thermal than the optimum ship in a downer.

After all this rambling, I will say a few words about Great Speckled Bird. In 1976, I built two of them; one for average contest days we have around here, with maybe some wind and rain, and one a bit lighter for fly-off flights, since it would fly longer in so-called 'dead air'. I took both models to the 1976 Springfield Nats to try once again to win the Mulvihill Trophy, which had eluded me for 35 years. Jim Lewis and I were going to fly alternately, so we might help each other... " 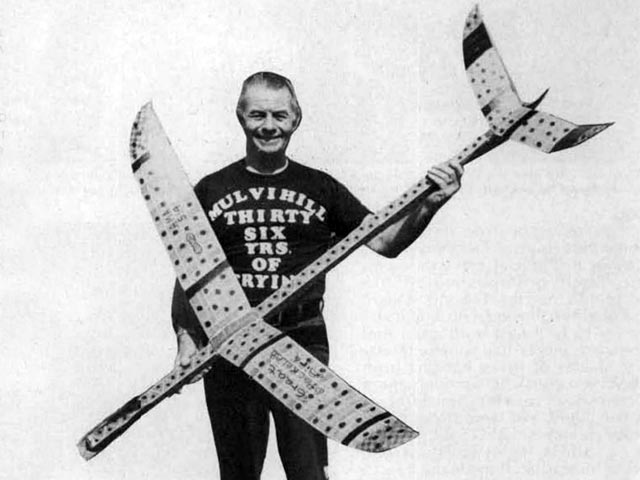