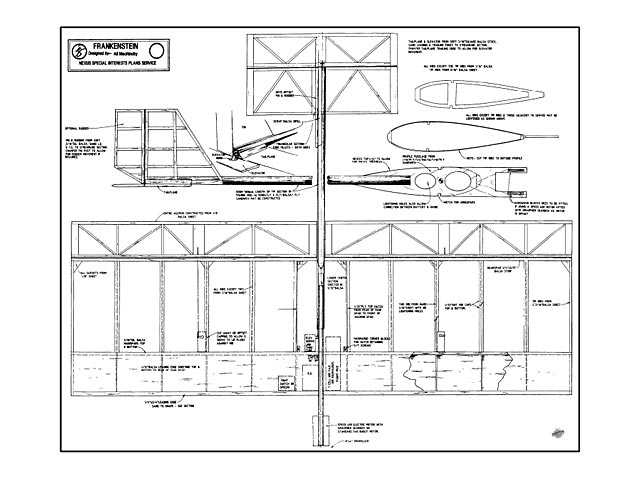 Quote: "The basic idea behind the aircraft's creation stems from the desire to be able to fly in an enclosed space, yet still provide an interesting display. At the 1993 Model Engineer Exhibition, I flew a 48 inch span vintage design powered by a Speed 400 geared motor. Unlike many of the models that attempted to fly in this very confined hall, it was very successful. The contrast between the sound of an electric gearbox to that of a screaming Cox engine was so pleasing that I was instantly won over to this power system.

Frankenstein was then designed primarily around its power-plant, proving not only to be relatively cheap but also easy to use and not just indoors either. If your lounge or back garden is big enough, and your wife is understanding, I thoroughly recommend it as flying an aerobatic machine like this in a tight space is one of the most adrenaline pumping experiences I can think of.

Building: Due to the simplicity of the aircraft's design (you may have already noticed the lack of curves), it is very easy to diversify from the plan. So much so that to date I have constructed five of these machines, each being different to the previous one. Some of the experiments I have conducted have proved successful, others not so. The modifications I regard as the most useful are included on the plan, but by all means build it as quickly, simply and as ugly as you please.

The first of these so called modifications was to build as light a model as possible. If a Speed 400 is your selected power-plant, I do recommend taking fairly considerable care to build this model as light as possible. This at least allows you to choose which battery configuration you like. For instance, one of the heaviest models that I built used 3/32 solid ribs and 1/16 sheeting with all sheet flying surfaces. At this weight the model would barely loop on a 9.6v battery pack. Whereas my lightweight version would fly quite happily on 7.2v. In the long run you have to balance how much time you want to put in to building and how well you want it to fly!

The rib template on the plan shows two different versions. The outer solid line is the profile of the rib, and the inner dotted line an area that can be cut out to save weight, except on those ribs that the servos are bolted to. Lightening the ribs in this fashion is quite time consuming but when complete it provides an extremely light equivalent which when capped and glued into place is as strong as the solid version.

The next alteration you may want to include is that of a rudder. I must admit that although this is fairly time consuming and fiddly, it does add a lot of fun to the flying performance, with stall turns and really flat spins being the order of the day. The rudder marked on the plan is ample for this model. To link it to the servo, I found that a push pull system worked best, and although the servo is not completely central the offset caused by this is minimal enough to be overlooked.

One last option that you have is choice of motor. If all of this weight saving is getting to sound like too much hard work, you can change the motor. Surprisingly enough, it isn't a more expensive equivalent that I recommend. At the Model Engineer Exhibition I was lucky enough to be asked by a friend to test fly his version of the Frankenstein. The main difference between his aircraft and mine was weight, his weighing in at almost twice that of my lightened version. With the speed four hundred on 9.6v it would fly half a circuit and mush to the floor. The following day, the same friend asked me to fly the same plane with just one modification. Overnight - well, what looked like over a matter of ten minutes - he had cable tied a standard 540 motor in the place of the Speed 400. Still running on the same 8 x 4 prop, this motor would give a power run of about three minutes on a pack of 600 cells. But what a three minutes it was. I estimate the performance was doubled, yet the funny thing is that the price was more than halved. if only everything in life could work like this.

Now down to the actual building. Decide now what modifications if any your model will have. The first thing to do after cutting out all of the relevant parts is to make what can only be described as the fuselage. The centre rib is basically a laminate of 1/16 ply and 1/4 in balsa. Epoxy would be a good glue for joining these three ribs, but throughout construction I used a slow setting cyano, often aided by an activator spray. Basically, use what ever suits your style off building.

One thing to be careful about when cutting the centre rib parts out are the various slots and hols for the motor, boom and wiring..." 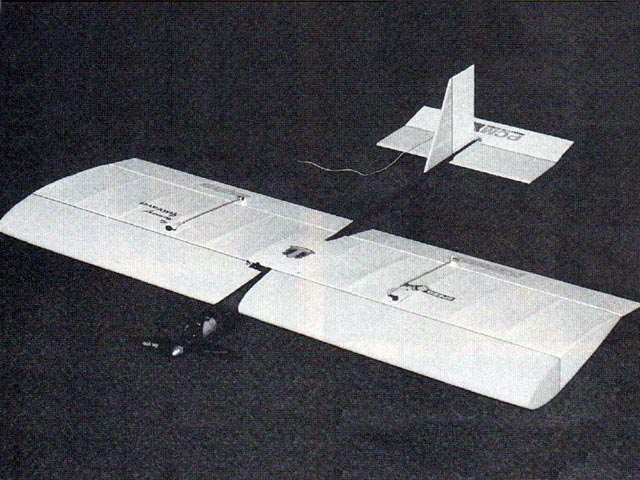