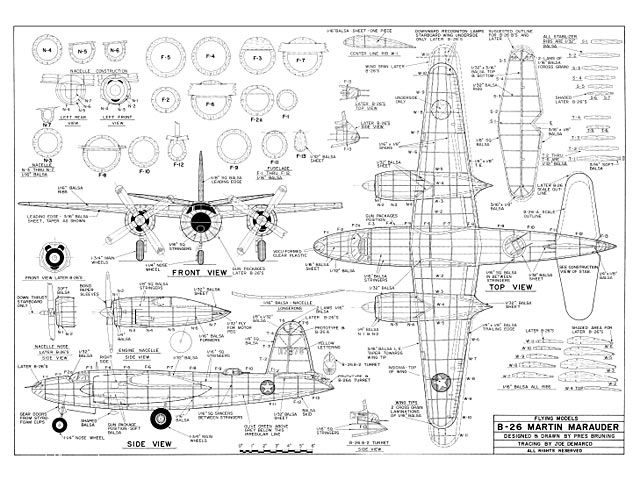 Update 25/04/12: Replaced this plan with a much higher quality scan, courtesy of theshadow.

Quote: "To my way of thinking, aside from the de Haviland Mosquito, the Martin Marauder is by far the cleanest, most aesthetically pleasing, most modern looking medium bomber of World War II. With those large, long engine nacelles sticking far forward of the wing leading edge, it makes an ideal rubber band powered subject, allowing plenty of room for the rubberband to flop around and cause very little CG shifting even if it knots up in the back of the nacelle.

I chose to model the earlier version of the Marauder. The real plane was fast and too hot to handle for some, but oh boy, could it run away from a Japanese Zero! Perhaps as a model it would be a handful, but oh, how the prospect excited me!

Let's begin construction with the fuselage. Being perfectly circular made it easy to lay out and plot the bulkhead sections and to plot stringer locations. I prefer to use the keel method of construction. Use a cardboard jig to hold bulkheads in alignment while gluing. Add in the remaining stringers, left and right, at the same time to ensure symmetry. I left the top of the fuselage open above the stringer between F5 and F8 so that the entire wing and engine assembly could be lowered into place. When the fuselage is completed, tissue cover (green above the color separation stringer, grey below) using water thinned Elmer's Glue, 50/50.

The wing and engine nacelles were built in-tegrally with dihedral added in. First, tissue cover the engine nacelles, next the fillets, then the center and outer wing panels..." 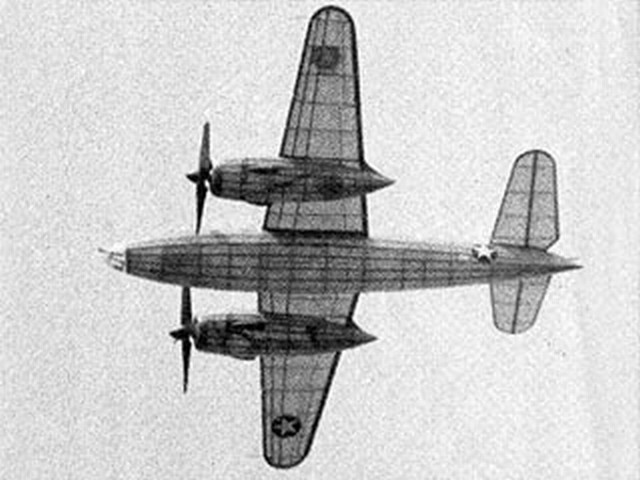